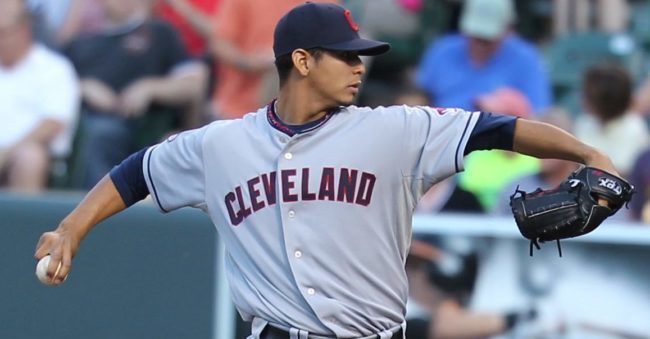 Welcome to MLB Monday! We have a solid 8 game slate on our hands tonight that’s packed full of action. We’ll kick things off on the mound with Carlos Carrasco, who is actually a pretty easy cash game play for me. I know he had a couple off-games prior to last, but I think he corrected any doubts about his game with the 9 innings and 14 strikeouts vs the Brewers. Carrasco is a true ace and there's no way he should be cheaper than Patrick Corbin. Monday, Carrasco draws the Tigers. They’re a weaker lineup than I can ever remember and are currently ranked 21st against righties in terms of wOBA. They strikeout close to 23% of the time and don’t have much pop. That might not need to be said when Victor Martinez is the 3 hitter in 2018. Carrasco is fairly priced on both sites and the guy I’ll be leaning on for cash games. There are some other options worth a look, so let’s move on.

In the past, Patrick Corbin has been a tourney-only pitcher with a ton of upside and just as much downside. He was pitching in a tough ballpark and has big HR problems since entering the majors. So far through 2018, Corbin has held a .247 wOBA vs righties and a .176 vs lefties. He still struggles with command on time and it’s why we don’t see him work late into games. As for the match-up, the Brewers rank 29th against lefties and strikeout 21% of the time. Chase Field is no longer a hitter ballpark and the numbers have backed that. Corbin is an elite play in all formats, though I personally prefer Carrasco.

The only real problem we’re looking at here is the leash. If given 100 pitches, Lucchesi is close to a lock at the price. However, it’s only fair to project 70-80. That severely limits his upside and turns him to a guy I use in cash games for some savings. He’s been excellent since stepping foot in the majors and hasn’t had more than a minor hiccup. He’s a strikeout machine and has posted a sub .295 wOBA since entering the league. The Rockies are good against lefties by the numbers, but not nearly as good on the road. They strikeout an insane 26% of the time and gives Lucchesi 8+ K upside. I personally will do my best to get as much Carrasco as possible, but Corbin and Lucchesi are my second and third favorites.

Moving onto the sticks, we'll look at a guy that's won us a lot of cash over the past couple days. He's homered in each of the last two contests and now sees as good of a match-up as either. Andrew Heaney is a solid young lefty, but he's struggled immensely vs right-handers. Before this season, a .403 wOBA. So far in 2017, he's gotten it down to a .334, but the power and hard contact is as present as ever. Gattis has slashed lefties to the tune of a .341 wOBA since the start of 2017 and has as much power as any catcher not named Gary Sanchez. Gattis is still too cheap on both sites and can put it out in any park.

The Indians are going to be one of our top offenses on this slate. They're naturally one of the more dangerous lineups in baseball and sees a phenomenal match-up with Mike Fiers and the Tigers. Fiers was pitiful in 2017, allowing a .347 wOBA against lefties and a .360 against righties. Not good by any measure. His peripherals backed everything up and certainly didn't suggest any improvement. Both Edwin Encarnacion and Yonder Alonso are menacing against righties, but Alonso is much cheaper. I prefer him just slightly in cash games, but we know Encarnacion is a 2 homer god and can lead you to the top of a tourney with ease. The Indians are easily a favorite offense on the slate and both of these guys would be close to musts in a stack.

If you're able to pay up at second base, it's either Jose Altuve or Brian Dozier. I could have very easily touched on Altuve, but we'll touch on the Astros plenty and the Twins will go just a bit ignored. Wade LeBlanc is clearly one of the worst pitchers on the slate and while he hasn't been bad on the surface, a 4.95 xFIP suggests some impending regression. His struggles have always been against the right side and he's held a .341 wOBA over the last three seasons. Dozier, on the other hand, is a lefty masher. Dating back to '16, Dozier has posted a wild .441 wOBA against lefties and has as much power as you can ask for out of a 2nd baseman with 42 and 36 homers in the last two seasons. LeBlanc hasn't been horrible, but I think Dozier might give him something to cry about tonight.

If you can't pay up at second base or are a big fan of the Indians, Jason Kipnis is in a great spot at second base. Sure, he's been pretty bad. There's no denying that. With that being said, he still hits second in one of the best lineups in baseball and will continue to get a ton of RBI and run opportunities. He gets to face off with Mike Fiers, who has been bad against both lefties and righties. The Indians are expected to put up over 5 runs and Kipnis should be involved in at least one. His price is still low on both sites and he gives you cheap exposure to a top offense on the night. The Tigers bullpen is also bad and won't do much after Fiers gets blown up. We'll get to some more Indians bats.

I told you. Shortstop is a spot I'm looking to pay up for and both of these following options are extremely solid. Let's start with Francisco Lindor. We've looked at Encarnacion, Alonso, and Kipnis, but could also look at Ramirez, Brantley, and so on. We've touched on Mike Fiers plenty, and he's still just as bad as ever. His peripherals are in the garbage and he's going to struggle mightily with this potent Indians club. Lindor has posted a .396 wOBA against righties over the past season and is only getting better at 24 years of age. He's expensive, but there are a few ways to pay up on this slate and Lindor should be pretty low owned because of it.

We’re back to the Astros at SS after ignoring Jose Altuve at 2B. To be clear, Altuve is an elite option, but I just wanted to touch on a different team to even things out. The Astros are still a great target against a lefty in Andrew Heaney that has questionable peripherals vs righties. Correa is the best power bar in this lineup at this point and has demolished lefties to the tune of a .451 wOBA over the past season. The ballpark doesn’t help, but he has the power to put it out anywhere and his offenses is guaranteed to put up some runs. Correa and Lindor are going to cost you at SS, but it’s the only place I’m comfortable paying up at.

Jake Odorizzi was once a guy that many thought would be a 2/3 starter in this league for a long time. I’m not sure it’ll happen. He’s been over a 5 xFIP for two seasons now and has struggled against both sides of the plate. Against lefties, he’s given up a .341 wOBA over the past two seasons with some serious power issues. As for Seager, he’s posted a .361 wOBA against righties dating back to 2016. He’s hit 3 homers in his last 4 games and is swinging a hot stick in the middle of the order. His price is fair and I’ll have a ton of exposure in both cash games and tournaments. He should also move up a spot in the order with Robinson Cano likely out indefinitely.

If you need to pay down at 3B or Kyle Seager just doesn’t fit, Daniel Descalso is a strong pivot. He never jumps off the page as a guy you will go out of your way to get, but he’s a good hitter against righties and often finds himself in the top half of a pretty dangerous Diamondbacks lineup. While a bit inflated, Descalso has sported a .381 wOBA against righties to start the year. Tonight, he faces off with Junior Guerra. In 2017, Guerra allowed a .350 wOBA to both sides of the plate and 18 total homers in 70 innings. The D-Backs have an expected run projection close to 5 and Descalso will have his opportunities to pay this salary off. At a relatively weak third base position, Descalso will be on some of my teams without a doubt.

We'll just stay in Arizona and pick on Junior Guerra a little bit more. Like I just said, he's allowed a .350 wOBA to both sides of the plate and has had some very insane HR issues. He now faces off with a Diamondbacks team that is lethal in Arizona. David Peralta has sported a .363 wOBA against righties over the past two seasons and is a guy they lean on to produce against right-handers. His price is very fair on both sites and you can play him in all formats. Along with Peralta, Pollock and Souza are very much in play. I like the Diamondbacks as a stack and they shouldn't be all that highly owned. Peralta is a cash game stud that I'll have close to 100% exposure to.

Brantley is close to a must if you're going to stack the Indians. He's also an excellent stand-alone cash game option. He hasn't showed the same power as he did in 14/15, but he's been just as good of a pure hitter as ever. His wOBA against righties is currently sitting at .460, backpacking on the .378 batting average. His price is still fair on both sites and you can play him in all formats. Mike Fiers is going to consistently struggle against both sides of the plate and that's just not a good recipe for success against a lethal Indians club. Let's find some value in the outfield.

There isn't much value to look for in the outfield. We'll look at Matt Joyce, who's going to face off with Rick Porcello in Fenway Park. Porcello has been pretty good in 2018, but he has always struggled a bit vs lefties. Joyce on the other hand is made to be a consistent bat vs right-handers. He never jumps off the page, but has held a .371 wOBA since 2015 against them. Porcello is by no means a bad pitcher, but his peripherals don't suggest he's all that good either. With outfield a lot worse than it is on most slates, Joyce is a solid value option in all formats. Good luck tonight and feel free to comment below with any thoughts!