We are now just one week away from the U.S. Open with just one tournament standing in our way, the FedEx St. Jude Classic from TPC Southwind. The biggest difference from last week is the strength of the field as we have just two of the Top 10(DJ, Koepka), four of the Top 20(Stenson, Mickelson), and nine of the World's Top 50 golfers in the field.

The course is a Par 70 that stretches just over 7,200 yards and is set up with some narrow fairways and smaller greens which puts a ton of emphasis on ball striking this week. Not only are the fairways narrow but there are trees lining the fairways combined with strategically positioned bunkers and water bringing driving accuracy into play and will dictate a lot of "less than driver" gameplans off the tee. As you can also see below when looking at the course trends(via Fantasy National Golf Club), Strokes Gained: Approach is very important here if you want to be lurking on the leaderboard come Sunday. As with all Par 70 courses, there are 12 Par 4's this week and seven of them come in at 450-500 yards which is a distance I will be looking at closely when building my models. I won't be putting as much emphasis or weight on Par 5 Scoring simply due to both of those holes being the easiest on the course with almost everyone being able to reach them in two and make birdies. I am also looking at a combination of Bogey Avoidance and Scrambling as the greens are difficult to hit so those players who can get up and down more often will stay in the hunt and especially those who avoid the big numbers(double or worse). 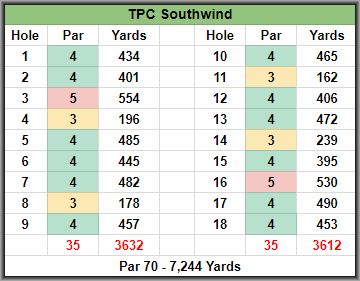 **Click the image above to check out a hole by hole breakdown of the course via PGATour.com** 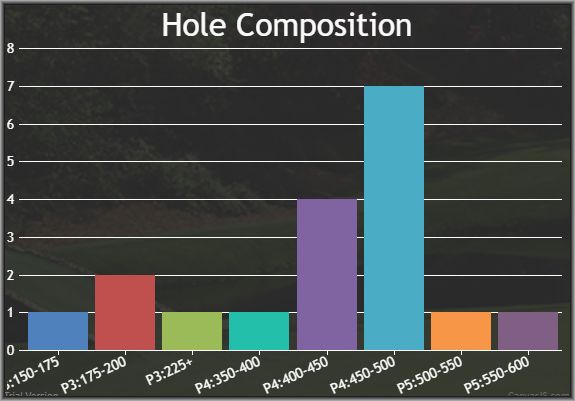 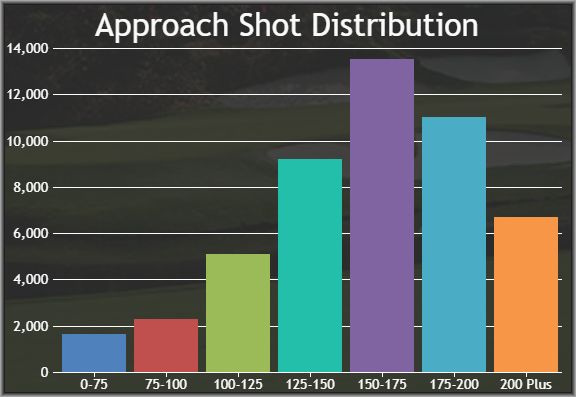 I could have easily placed Daniel Berger in this spot this week but decided to go another route as he is the most obvious course history target ever this week having played here twice winning both times. Instead, I will turn to Phil Mickelson who missed the cut in his first to TPC Southwind back in 2001 and wasn't much better(T59) in his second trip in 2009 but has been on fire over the last five years. He finished 9th last season and has come in T11 or better in five straight trips with three Top 5's on his resume. Looking at the last 24 rounds data from Fantasy National, Mickelson is also second to only Dustin Johnson here at TPC Southwind in DraftKings scoring and ranks #1 in Strokes Gained: Total, #3 in Strokes Gained: Ball Striking and #1 in both Strokes Gained: Short Game and Strokes Gained: Putting. Despite missing two cuts in 14 events this season, he is in fine form with a win at the WGC Mexico to go along with six Top 10's and 10 Top 25 finishes.

There is a case to be made for going stars and scrubs this week and one lower-end player I will be targeting is Australian, Matt Jones. It definitely hasn't been his best season on Tour as he has missed the cut in half the stroke-play events he has entered(6/12) but he does come into this week with back to back Top 20 finishes at the AT&T Byron Nelson and team formatted Zurich Classic and now returns to TPC Southwind where he has excellent course history. He missed the cut in his first to trips back in 2012 and 2013 but has since reeled off a T3 in 2015, T26 in 2014, and a T18 in last years event. The approach shots are concerning as he ranks 89th in that area but he does stand out in a few key areas including 14th in Birdie or Better %, 36th in Scrambling, and 7th in Strokes Gained: Around the Green. He is also 27th in the field in DraftKings scoring over his last five events. I don't think we need to go here in cash games, but he makes a nice target in GPP's at a low cost.

Dipping down into the second tier in pricing this week, we have Tony Finau who has been one of the more consistent fantasy options on Tour this season. He has missed just two cuts(Valspar, WMPO) in 16 stroke-play events and has finished runner-up twice(Safeway Open, Genesis Open) with four total Top 10's and 10 Top 25's. He is making his first trip to TPC Southwind for the St. Jude Classic and while his 120th rank in driving accuracy does raise a red flag, he makes up for it in other areas. He ranks 8th in Strokes Gained: Approach, 11th in Strokes Gained: Around the Green and is Top 10 in both Birdie or Better % and Bogey Avoidance. Finau also ranks fourth on my sheet in average DraftKings scoring(79.3) over his last five events. The lack of course history has me going in other directions for cash games but I will have plenty of exposure in GPP formats with his huge upside.

Since missing five cuts in his first 10 events this season, Dahmen has been playing pretty darn good considering the low price. He has made the cut in seven straight stroke-play events and comes into this week with three straight Top 20 finishes at the Fort Worth Invitational, AT&T Byron Nelson, and Wells Fargo Championship. He also stands out in a big way when looking at his stats over the last 24 rounds(via Fantasy National Golf Club) as he ranks 28th in DraftKings scoring, 9th in Strokes Gained: Total, and 13th in Strokes Gained: Ball Striking. He also has some course history on his side as he played here for the first time last season and impressed with a T18. He makes a fantastic GPP play, especially if making stars and scrubs lineups and the best part is that he has an average ownership of .6% this season with his highest owned week at Byron Nelson at 2.7%.

Stenson is #1 in my stats model this week and stands out in a ton of areas. He ranks 1st in Strokes Gained: Approach, Strokes Gained: Ball Striking, Driving Accuracy, GIR, Bogey Avoidance, and Par 4 Scoring. He also ranks Top 10 in Good Drive %, Proximity from 150-200+ yards, Birdie or Better %, Scrambling, and Sand Save %. He only ranks 13th in my overall model this week but that has a lot to do with the course history as he hasn't played here over the last five years. He has played here twice, missing the cut in his first trip back in 2009 and but then returned in 2012 and posted a T13. Outside of the missed cut at the Valspar back in March, it has been a very good season for Stenson who has six Top 25's and four Top 10's in seven stroke play events. His game fits the course and he comes in with form making him a top play in all formats this week.

His form is kinda in the dumps at the moment having missed the cut in three of his last five events but he has a game that fits the course stats model this week. On my sheet, he ranks 9th in Strokes Gained: Approach, 10th in Strokes Gained: Ball Striking, 2nd in Driving Accuracy, 3rd in Par 4 Scoring, 20th in Birdie or Better %, and 6th in Bogey Avoidance. That game has worked for him here at TPC Southwind in the past as he has played here three times in the last five years with finishes of T27 in 2013, T12 in 2015, and a T4 last year. When he finds his groove he is one of the most consistent players on Tour as he has shown by making 22 straight cuts made prior to the Valspar Championship this season. At his current price on DraftKings, I think we can even consider him in cash games this week and most definitely in GPP formats.