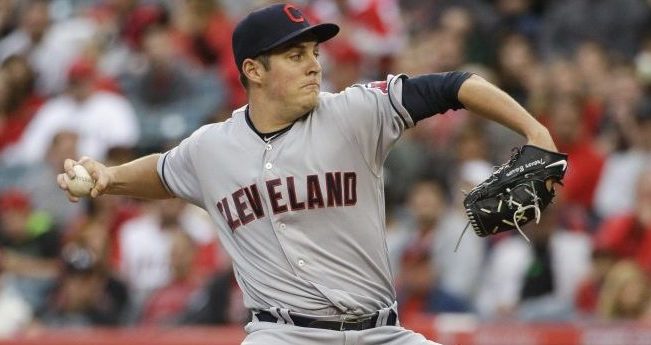 We have two elite aces on the mound at the top of the salary tonight and neither has an elite matchup as both the Athletics and Reds rank Top 10 in hitting against right-handed pitching. Let's start with Verlander who sits with the fourth-best ERA(2.15) in the league and after giving up nine earned runs in two starts to the Rays and Jays, he bounced back in a big way holding the White Sox to four hits and two earned runs while striking out 10. Over the course of 19 starts, he has provided a very high floor holding opponents to two or fewer earned runs 14 times but he has also given us big upside striking out over 11 per nine with an elite 13.1% swinging strike rate.

Dipping down into the mid-range of pricing we find Garrett Richards who made his return from the DL on July 4. He was restricted to 80 pitches but looked good holding the Mariners to four hits and two earned runs while striking out eight and walking just one. The general rule for pitchers working on pitch counts is a 10-15% increase per start which means he is very likely to see 90+ pitches and back to his regular workload. On the season, he has made 15 starts and has held opponents to two or fewer earned runs in four straight and six of his last seven starts and sits with a 3.42 ERA and 3.48 xFIP with a 10.51 K/9 and 11.6% swinging strike rate. For the Mariners, they sit Top 10 vs. right-handed pitching but have struggled a bit lately with swings and misses sitting with a 23.8% K rate over the last 14 days. All things considered, I think Richards makes a nice mid-range SP2 on DraftKings and low owned GPP option on FanDuel allowing you to stack the bats.

There are a lot of big bats to pay up for tonight and my top one at first base is Paul Goldschmidt as the Diamondbacks start a series in Coors Field against the Rockies. He got off to slower than normal start to the season with a .209 average through the end of May but has come on strong since hitting .381 with a .476 on-base percentage and crazy 1.224 OPS. More good news as he crushed left-handed pitching to the tune of a .452 wOBA, 186 wRC+, and 1.093 on the season. He will go up against Tyler Anderson who has not surprisingly been worse at home giving up a .344 wOBA(.284 on road) and 1.71 HR/9(0.99 on road). If playing stars and scrubs in cash games, he is worth every penny and if using the value pitcher approach in GPP make sure to play some D-Backs stacks.

If you are looking to go with a little more of a balanced approach in cash games, I suggest riding the hot streak with Yuli Gurriel. He went into Monday night with hits in six straight including three multi-hit efforts, three doubles and two home runs pushing his average to .303 on the season. While he doesn't walk much(4.2%), he doesn't K much either(10.6%) which is a good recipe for cash games. He will go up against Sean Manaea who started the season on fire holding opponents to two or fewer earned runs in each of his first six starts but has struggled since with a .476 ERA and 4.63 xFIP in his last 12 starts while giving up an average of a home run per game and striking out just over five batters per nine. Not only is Gurriel a nice cash play tonight, he makes a nice GPP one-off or part of an Astros stack that could be lower owned with so many other teams in great spots.

The DFSR projection system has never seen a day it didn't like Brian Dozier at second base and tonight might one of the times I agree with it. He has been better as of late as he went into Monday night with hits in three straight and six of his last eight games including three doubles and two long balls. He has been better against lefties for his career but it has been much closer this season and the wash comes as Ian Kennedy has some reverse splits giving up a .350 wOBA to righties with a 4.80 xFIP and 11 of his 15 home runs. Overall, Kennedy has been pretty bad giving up a home run per start with a 5.11 ERA, 4.58 xFIP and 38.7% hard contact. All things considered, it may be a perfect time to load up on the Twins and Brian Dozier.

The price on DraftKings is nothing to write home about but on FanDuel, Nunez is a near lock if you are playing either of the big two pitchers tonight. He not only comes with a value price but has been red-hot with hits in four straight and 12 of his last 13 games going into Monday night and has reverse splits on the season with much more success against righties. The only knock is that he hits down in the order but I am willing to throw that out the window as he gets a nice matchup against Gallardo who has given up 15 earned runs in his last four starts with four home runs.

Going back to Coors for another D-Backs pick as Nick Ahmed has spent more than half his games in July in the two-hole and comes at a bit of a value considering the park and matchup. He has struggled overall as he enters tonight with a .226 average but has been better as of late with hits in nine of his last 11 games with three doubles, one triple, and a home run. More good news as Ahmed has strong splits vs. lefties with a .280 average, .346 wOBA, and 133 wRC+. The value goes down a bit if he is back down at the bottom of the order but if he is back near the top he is a great play in all formats.

Going down into the value range at shortstop we have Brad Miller who has bounced around the lineup hitting sixth at times and has also spent some time in the leadoff spot. He is hitting just .269 on the season but since being traded to the Brewers in early June, he is hitting .319 with a .378 on-base percentage. While the park in Miami is not a hitters park, the Brewers do get a plus matchup vs. Pablo Lopez who has struggled in his first two major-league starts giving up seven earned runs in 11 innings with three long balls(30% HR/FB rate) a 40% hard contact rate. He is in play in all formats on FanDuel as a shortstop and is either first or second base on DraftKings.

The Indians are at the top of my list of teams to target tonight as they sit with the third-highest implied runs in a great matchup vs. a struggling Sal Romano and the Reds. Over his last three starts, Romano has given up 11 earned runs in 15 innings pushing his ERA to 5.40 on the season. He also gives us a ton of upside when targeting against him as he has given up four long balls in those three starts and 17 on the season for a 17.7% HR/FB rate and 36% hard contact. My top target for the Indians is Jose Ramirez who leads the team in batting against righties with an elite .433 wOBA, 179 wRC+, and a 1.049 OPS. He has also been terrific lately averaging 15.8 FD/12.2 DK points per game over his last 10 games.

Beckham is nothing more than a punt play to help get an elite pitcher into our lineups, especially on DraftKings where he is right at the top of the PTS/$ rankings. Don't get me wrong, Beckham is not a great player but as long as the prices are cheap and he continues to hit leadoff I will continue to use him as a one-off play. He has been decent since taking over that role as he went into Monday night with hits in six of his last eight games. The matchup is not great vs. Tanaka but he is making his return from the DL and has a 4.58 ERA on the season. You can do much worse for a punt play tonight.

I mentioned the terrific matchup the Indians have tonight but what I didn't mention is that Romano has been much worse against lefties giving up a .382 wOBA, .517 SLG %, and 41% hard contact to lefties. For Brantley, he sits third on the team against righties with a .379 wOBA, 141 wRC+, and a .894 OPS with eight home runs. He is exactly what we are looking for in a cash game play as he has been consistent all season with a .306 average, .351 on-base percentage, and has struck out just 8.8% of the time. He also comes at a big discount from his teammates Lindor and Ramirez.

I know, I know, the Twins have let us down many times this season and DFSR is in love with them but I will continue to target them for GPP's in these upside matchups. Tonight, it's against Ian Kennedy who has allowed 11 earned runs(5 HR) in his last three starts and is averaging a home run per start(13.9% HR/FB rate) and sits with a terrible 5.11 ERA and 4.58 xFIP. For Rosario, he has been the teams best hitter this season with a .301/.342/.536 slash line with 18 home runs, 53 RBI, and 58 runs scored. He has also destroyed right-handed pitching to the tune of a .399 wOBA, 155 wRC+, and .948 OPS. He makes a great start to a Twins stack and is also a nice one-off play in cash games.

We haven't talked a whole lot about Dickerson this season as he has been hitting down in the order but he was moved up to the leadoff spot last night, making the optimal lineups and not disappointing going 2 for 5 with a triple, RBI, and two runs scored. That effort helped push his season average up to .309 and if he is back in the leadoff spot again tonight, he is a great play in all formats. He and the Pirates get a plus matchup against Jeremy Hellickson who has given up 16 hits and 11 earned runs in his last two starts with just six K's. He has done well in shutting down righties(.275 wOBA against) but has struggled against lefties with a .342 wOBA and .478 SLG % against. Also consider Dickerson's outfield partner, Gregory Polanco who is heating up with hits in four straight and 10 of his last 12 games.