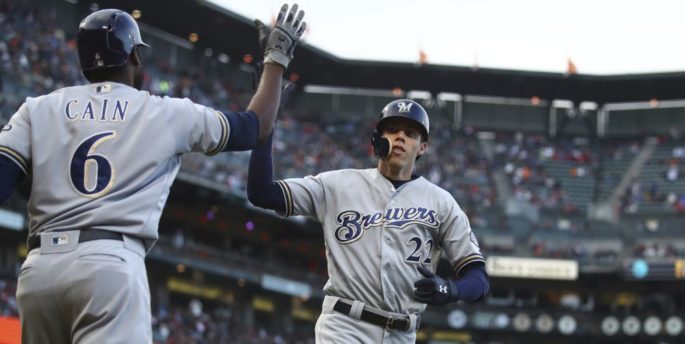 While Verlander may be the best pitcher based on pure talent on the slate, he is not my top pitcher for cash games tonight at that lofty price plus his up and down form lately(you might, however, find him in the GPP article). I will instead be turning to Mike Clevinger of the Indians as my top pitcher from a PTS/$ perspective. He has been good all season and even better in the second half giving up just 13 earned runs over eight starts(2.42 ERA) while striking out over 10 batters per nine with a 12.3% swinging strike rate. The Indians are also big favorites(-210) facing a Royals team that has scored the second-fewest runs on the season and they also rank 24th in wOBA(.307) and wRC+(91) against right-handed pitching. All things considered, Clevinger is a great play in all formats tonight.

If you need the extra savings tonight, don't be afraid to turn to Rich Hill. The pitch count was a concern early in the season but since the All-Star break, Hill has gone at least six innings in six of his eight starts while impressing with 2.47 ERA/3.66 xFIP while striking out over 10 batters per nine with an 11.6% swinging strike rate. That is tremendous news for the Dodgers who are in a dogfight in the National League West Division as they sit in first place but only by a game over the Diamondbacks and Rockies. The even better news is the matchup as they will face the Mets who rank 24th in run scoring on the season and also rank dead last against southpaws on the season with a .282 wOBA, 78 wRC+, and 24.8% strikeout rate. While I prefer Clevinger, there is most definitely a case to be made for Hill in cash games and if Verlander/Clevinger command a ton of ownership Hill makes a tremendous GPP pivot tonight.

The SP2 options are nothing to write home about tonight but one that stands out above the rest is Wade LeBlanc of the Mariners. He and the M's are early -180 favorites against the visiting Orioles who rank near the bottom of the league in runs scored(26th) on the season and have been worse against left-handed pitching with a .287 wOBA, 77 wRC+ and 21.9% strikeout rate. For LeBlanc, it has been a serviceable season as he has posted a 3.71 ERA and 4.43 xFIP and outside of a couple hiccups he has been better in the second half holding opponents to two or fewer earned runs in five of his eight starts. He has a good shot to make it six in nine in this plus matchup tonight which not only makes him a viable SP2 option on DraftKings but also a punt GPP option on FanDuel.

As always, there are a lot of top end plays at the first base position but with some tougher matchups, I will be turning to Jesus Aguilar as my play. He has been consistent all season with a .275/.356/.556 slash line and comes into tonight with hits in six straight and eight of his last 10 games. He has also provided a ton of power with 31 home runs and 93 RBI  and gets a plus matchup vs. lefty Mike Montgomery who doesn't strike many out(15.1% K rate) which is good news for Aguilar who sits with a 24% K rate on the season. At his current price on DraftKings, he is likely best utilized in GPP formats but is still a good play in all formats on FanDuel.

From a PTS/$ perspective, it will be tough to avoid Joey Votto at these prices even though he is only a couple games removed from injury. It may not be his best season to date but he has been solid with a .282 average and still boasts an elite .420 on-base percentage which gives him tons of opportunities to score runs hitting in front of Gennett and Suarez. He and the Reds also get a plus matchup against Joe Musgrove who has struggled in his last two starts giving up nine earned runs(four home runs). The Reds are underdogs in this game but considering Votto's price has been consistent in the mid $4K-$5K range on DraftKings and $4K+ range on FanDuel, I think he makes a nice option in all formats tonight in the second tier of pricing.

The fact the Reds are underdogs here probably has more to do with their own pitcher than the Pirates as I mentioned above Musgrove has struggled lately making this a nice matchup for the Reds. I also talked about Votto above being in a good spot to get on base and score runs and one of the bats that has been doing the damage is Scooter Gennett who has been en fuego with multiple hits in four straight and six of his last seven games pushing his season average up to .319 while adding 19 home runs, 81 RBI, and 79 runs scored and is just below last season's career-high OPS(.862 this season). If you are paying up at the position, it's Scooter all day for me and he may be a bit lower owned in GPP with LeMahieu and Dozier both cheaper and in great situations as well.

Gurriel has been struggling since coming back from injury with just five hits in his last 40 at-bats but the talent is there as he proved before where he had multiple hits in 11 straight games before hitting the disabled list. Despite the recent struggles(small sample), he is still hitting .285 on the season and best of all he comes at value price on both sites which puts him near the top of the PTS/$ rankings and a great punt play in all formats to help pay up for pitching and get some top bats in your lineup.

With our first trip to Coors Field in the article, I will be targeting Trevor Story who is transforming his game right before our eyes. After back to back seasons with a 30%+ strikeout rate he has brought it down to 25% in 2018 which has resulted in a career-best(by a long shot) .293 average and he has also been getting on base at a high .350 rate as well. While we got used to only targeting him against lefties that is a thing of the past as he is hitting .282 this season against righties with a .355 wOBA, 108 wRC+, and .839 OPS. The matchup isn't elite as Dereck Rodriguez has been good in his rookie season with a 2.47 ERA but is only striking out just over seven per nine and if you aren't striking out batters in Coors Field you are most times going to get yourself into a heap of trouble. Fire up Story in all formats tonight.

Turner is right in the same price range as Story on DraftKings making Story the obvious play in Coors but on FanDuel, he comes at a big discount and is still underpriced for the talent and is in play in all formats. The average has dropped off a bit this season and sits at .270 coming into tonight but he has been better lately with hits in five straight and 11 of his last 13 games. He has also shown a little more power this season with a career-high 16 home runs and adds even more upside with his speed as he has 35 steals on the season. The matchup doesn't jump off the page but he hits at the top of the Nationals lineup right in front of Bryce Harper and Anthony Rendon.

Turner's price on DraftKings is likely where it should be for the value he has provided but on FanDuel it seems like a bit of a steal that he is priced as the 10th most expensive at the position. He got a late start to the season due to injury but has been near elite in his 77 games with as he comes into tonight with a .312/.408/.517 slash line with 11 home runs. Like I have mentioned in articles past, the best part is that he has destroyed left-handed pitching to the tune of a .448 wOBA, 189 wRC, and 1.060 OPS this season and while Vargas has been decent in his last two starts, he has struggled to a 6.56 ERA/4.62 xFIP with a 16.9% HR/FB rate. All things considered, I think we can consider Turner a top play in all formats on both sites, especially on FanDuel.

At the time of writing this, there are conflicting reports on who is starting for the Jays but whether it's Gaviglio or Borucki I am in on the value with Duffy at the third base position. He provides little to no upside with just one home run on the season but has been a consistent play considering price as he enters with a .297 average and .355 on-base percentage. He is in play in all formats as a salary relief option but is a slightly better play if he faces Gaviglio as he has been slightly better against righties.

The Brewers have been red-hot winning five of their last six games and have taken a 1.5 game lead in the NL wildcard race. During that stretch, they have also scored 36 runs and it all starts at the top of the lineup with Cain and Yelich. While all the attention has been paid to Yelich who is coming off his second NL Player of the Week award, I will lean to Lorenzo Cain in cash games tonight for a couple reasons starting with the fact he comes at a sizeable discount on both sites. He has also been a picture of consistency in 2018 as well with a .307 average and elite .397 on-base percentage while scoring 72 runs. For GPP, I love fitting in Yelich who could be avoided by some due to the lefty/lefty matchup but don't make that mistake as he actually has an average 33 points higher vs. southpaws with a nearly identical wOBA, wRC+, and ISO.

McKinney is a former first-round pick of the Athletics that jumped around to the Cubs and to the Yankees and is hoping to find a stable home with the Jays since coming over in the J.A. Happ deal. He has made a good impression so far with hits in 11 of his first 14 games in with Toronto good for a .381 average and .471 on-base percentage and has played over half his games in the leadoff spot. The Jays will face a Tampa Bay bullpen game but given his price on both sites, McKinney makes a nice play in all formats should he be back in the leadoff spot and still garners our attention in GPP formats if not.