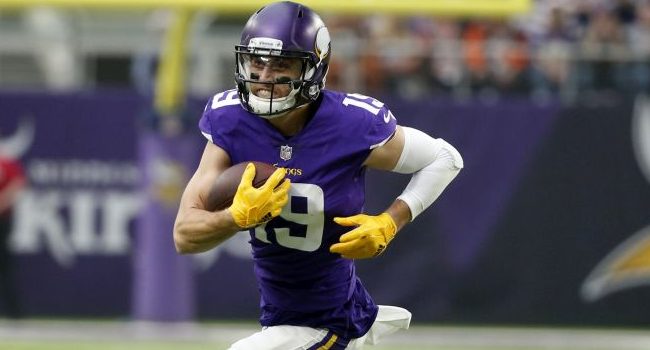 Welcome back football fans. Week 9 brings us another smaller main slate of games(10) as six teams(CIN, IND, NYG, PHI, ARI, JAX) are on bye weeks. We already went over our top plays for cash in our weekly Cash Game Article so let's now jump in and take a look at some of the top stacking options for GPP formats.

There are three games this week with 50+ Vegas Totals including the Saints/Rams game which has a season-high 60! You can bet all of those QB/WR combos are going to be chalky this week so I am going to go in a bit different direction with my first stack. The Vikings are at home as 5.5 point favorites vs. the Lions who do rank Top 10 in passing yards per game given up but also rank 30th when looking at DVOA against the pass. The matchup isn't what stands out, however, it is the Vikings and their leaning on the passing game this season. They are third in the league in pass vs. rush % and have totaled 78% of their total yards and 76% of the teams offensive touchdowns through the air.

Kirk Cousins is one of just five quarterbacks who is projected for 40 or more pass attempts this week but is the only one of those who is completing over 70% of his passes for the season. He is also second in the league with 2,521 yards and sixth in touchdowns with 16. He is also elite when breaking down matchups for his wideouts and while it was Stefon Diggs getting most of the target share last week catching 10 of his 11 targets for 119 yards and a touchdown(30.9 DK/22.9 FD points), Thielen caught all seven of his targets for his record-tying 8th straight 100+ yard game. This week I am looking to stack Cousins with Thielen almost exclusively as Diggs is going to see a heavy dose of Darius Slay on the outside leaving Thielen to get the MUCH better matchup against a combination of Nevin Lawson and Teez Tabor. You can almost guarantee Cousins knows all about the record and will do everything in his power to get Thielen past Calvin Johnson and no better time to do it than against Megatron's old team.

Cam Newton has been a heavy topic of conversation this week as he was written up in the Cash Game Article and talked about on both the Cash Game Podcast and Game by Game Podcast. I am going to pile on here as I also think Cam is a terrific GPP play this week whether you want to run him naked(no stacking options) or as a part of stack with an upside wide receiver. Like I mentioned on the Mega Podcast with Doug, Cam has hit 3x value on FanDuel and 4x value on DraftKings in three straight weeks yet hasn't thrown for more than 300 yards once. That is a testament to his running ability as he has rushed seven or more times in six of his seven games with 40 or more rushing yards in five of those games with four touchdowns and while the passing yardage hasn't been there, he has tossed multiple touchdowns in six straight weeks. He now gets an elite matchup against a Bucs team that has given up the second-most passing yards per game(318.4) and rank dead last in fantasy points given up to the quarterback. Pairing Cam with a Devin Funchess or Greg Olsen is tough as the targets are few and far between and his goal line rushing ability takes away some of their upside and they are both fairly high priced. This has me leaning towards rookie D.J. Moore who is coming off his best game of the season as he caught five of his six targets for 90 yards and they also utilized his explosive speed(4.42 40-yard dash) giving him two rushes for an additional 39 yards. While his price did go up, he is still very cheap compared to the upside he brings to the field and the Panthers offense.