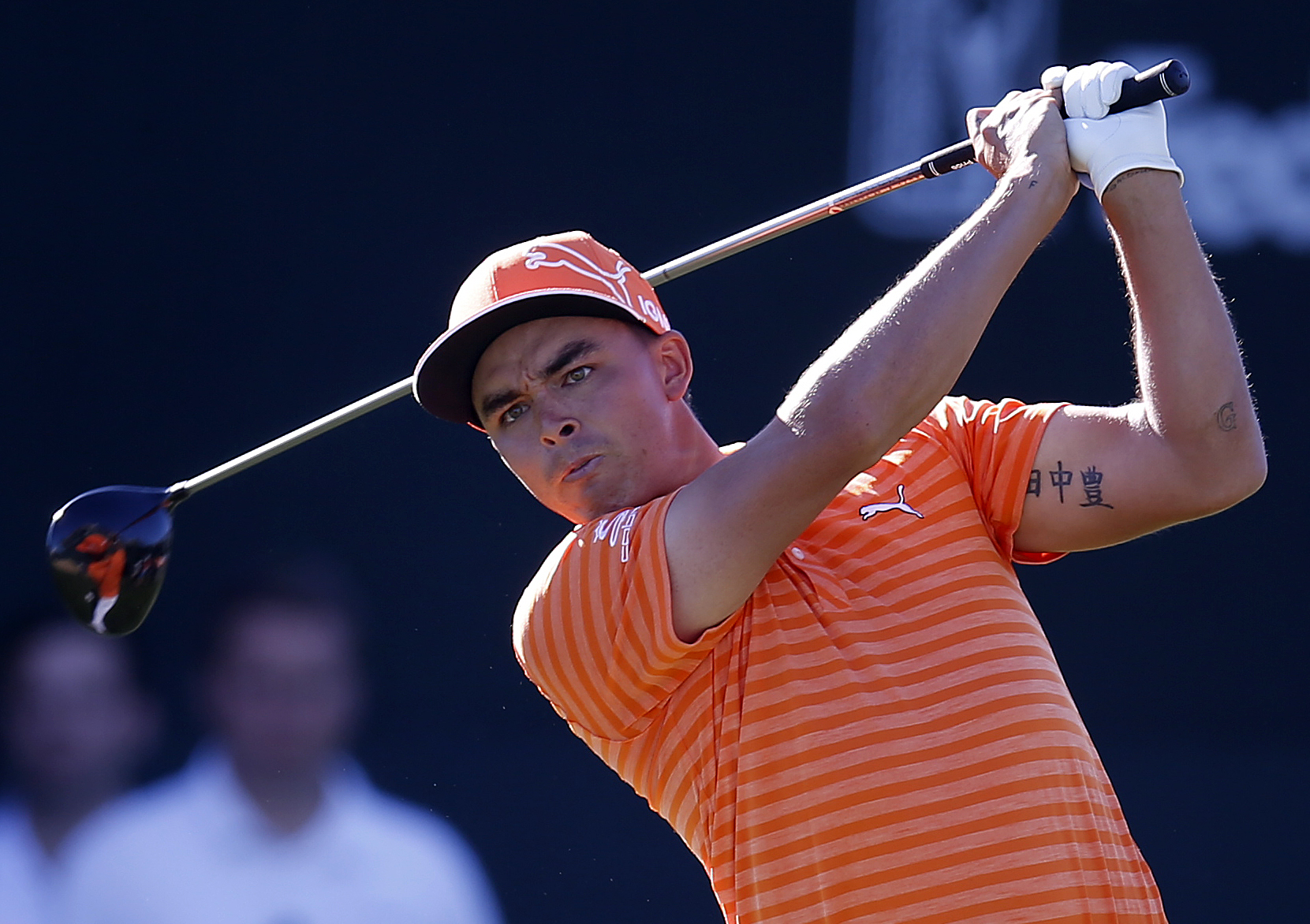 Chris will be bringing you weekly PGA picks, analysis, and breakdowns to help you cash on DraftKings and FanDuel. As every week in DFS PGA changes with the course setup, field of players and weather, Chris will be providing a range of different picks for cash games as well as upside plays for tournaments. If you have any questions to lineup lock you can reach him a variety of ways. Leave your question/comment below in the comments section, find him in the DFSR Chat room or hit him up on Twitter(@Jager_Bombs9). Chris is also providing his DF PGA Weekly cheatsheet where he provides stats, course history, current form, fantasy points, and much more. Grab your copy today and edge out the competition.

This week the PGA Tour heads back outside the US for a trip to the El Camaleon Golf Course in Playa Del Carmen, Mexico for the Mayakoba Golf Classic. The field isn't great but is headlined with Rickie Fowler(9th in OWGR), Jordan Spieth(14th in OWGR), and Tony Finau(15th in OWGR) as three of the Top 10 players in the Official World Golf Rankings teeing it up this week.

The course is a shorter Par 71 that stretches out just under 7,900 yards and with that lack of distance and emphasis hitting the fairways, we will likely see a lot of golfers clubbing down to 3-woods or irons. This would be the reason why the average fairways hit (62-65%) is higher than you would expect with smaller landing areas. Looking at the hole breakdowns, there is a very short Par 3 and two average length Par 3's and where the course gets difficult is on the Par 4's as five of 11 of them are between 450 and 500 yards and have played as the hardest holes on the course over the last five years, by far. I will be looking closely at performance from this range using the Fantasy National Golf Club tools as the players can separate themselves from the field on these holes. The other thing I will be weighing along with Birdie or Better %(low winning scores) is Par 5 scoring as around 35% of all birdies will come on these three holes. 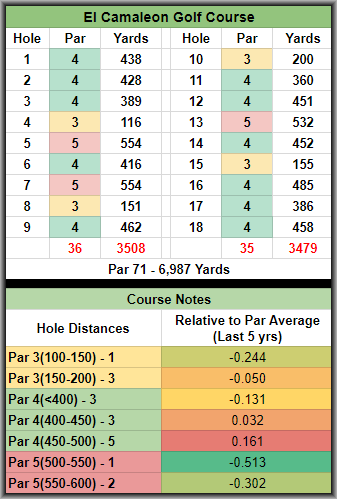 **Click the pic above to link to a hole by hole breakdown from PGATour.com**

I wrote up Fowler last week as an upside play in the top tier and he didn't let us down shooting four rounds in the 60's, making two eagles, 21 birdies, and ended up finishing with the fourth most DraftKings points(123). The injury seems to be a thing of the past as he has reeled off three straight Top 10's going back to the BMW Championship and in that time he ranks 5th in SG: Total, 6th in Birdie or Better Gained, 16th in SG: Par 4 from 450-500 yards, and 7th in fantasy scoring. At this point, I just don't trust Jordan Spieth at his price or Finau with all the travel and playing so many weeks in a row so I will be loading up once again with Fowler in GPP formats.

There are some excellent targets if you are on team Course History this week with Emiliano Grillo and Charles Howell III who both have back to back Top 10's here. I like both but will be going in a different with Si Woo Kim who comes in with the better form of the three. He withdrew from this event in 2016 but finished T17 in 2015 and T3 last year. He has also had an excellent start to the year with a T10 at the CIMB Classic, T23 at the CJ Cup, and came in T15 last week. He finished T3 for the week with 24 birdies but what stood out the most was his third round where he started with five straight birdies but gave them all back with a 9 on the Par 4, 6th hole. It will be hard to trust him in cash games at this price given his ball striking has been all over the place but he has clearly displayed huge upside for GPP's.

The mid-range is where I will be loading up for cash games this week and it starts with Chez Reavie. He had some issues near the end of last season missing five straight cuts but finished strong making three of his last four(T12, T20, T38) and has also started this season off fairly consistent(T33, T43, T7) outside the WGC HSBC Champions where he finished with a 73/75/74 to finish T35 in the no-cut event. He also returns to the Mayakoba Golf Classic with some nice course history having finished T14 and T4 in his last two trips. At his price with his consistency, he makes a nice core piece in cash game formats.

Piercy was another player that didn't let me down last week as he collected 18 birdies, an eagle, and just six bogey's all week and ended up ranking 9th in Strokes Gained: Tee to Green. Since missing the cut at the Safeway Open to open the season, Piercy has trended in a big way with a T27 at the CIMB Classic, T5 at the CJ Cup, and T10 last week at the Shriners Open. In that time, he ranks 7th in SG: Total, 24th in SG: Ball Striking, 18th in Par 4 scoring, 22nd in Par 5 scoring, 23rd in Birdie or Better gained, and 19th in fantasy scoring. I love players that check off all the boxes and he completes that checklist with course history as he has finished T4 and T16 in his last two trips to the Mayakoba Golf Classic. Fire up Piercy in all formats once again this week.

Party Marty comes in at #10 in my overall rankings this week and is the only golfer in the sub $8K range on DraftKings that ranks Top 25 in all four categories in my model. It starts with his form as he has been consistent to start the 2018-19 season with a T46 at the Safeway, T7 at the Sanderson Farms Championship, and T28 at last week's Shriners Open. His ball striking hasn't been great in those tournaments as he ranks 100th in this field in SG: Off the Tee but has been better on the Approaches ranking 48th but where he has stood out is in Par 4 scoring(11th) and birdie or better %(12th).  Now he returns to the Mayakoba Golf Classic where he finished T40 in 2015 and T13 in 2016. All things considered, he is in play in all formats for me this week.

If you are looking for a cheap value play on both sites this week consider McDowell who won this event back in 2015 and followed that up with a T24 in 2016 and T34 last season. I don't think he has winning upside this week but at this price, I would take a made cut as a floor and Top 20 for upside. He hasn't been great to start the season but he hasn't been bad either with back to back T41's at the CJ Cup and Shriners and looking at the last 12 rounds data(via Fantasy National), he ranks 20th in SG: Ball Striking(58th OTT, 9th APP) and 33rd in SG: Putting. 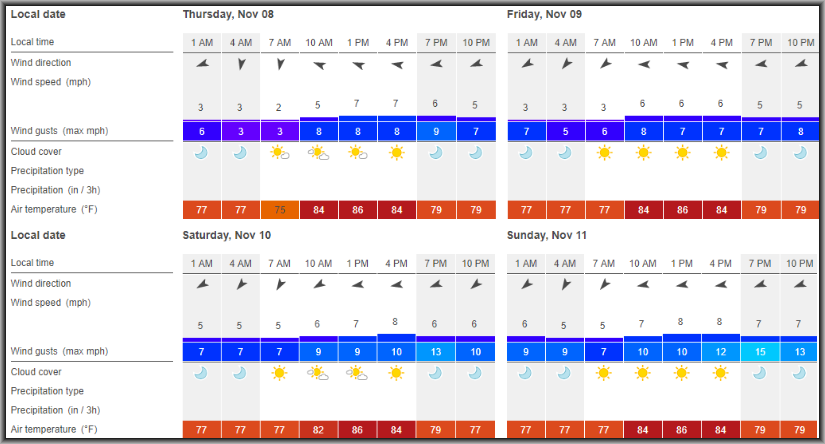