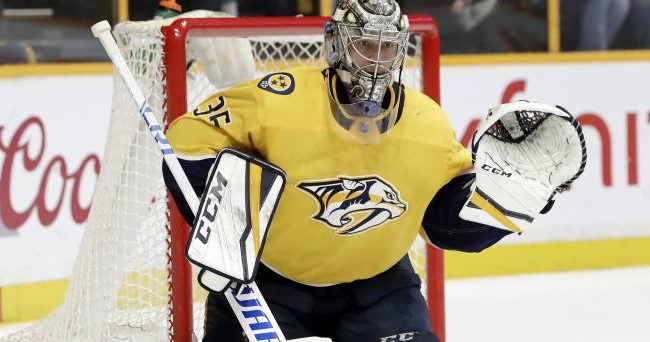 Welcome back hockey fans. The NHL has a bit of a weird schedule this week with Thanksgiving and gives us a huge 14-game slate tonight where all but three teams will be playing. That leaves us a ton of options at each price point so let's dig in and take a look at some of the top plays at each position.

There are a ton of options at the goalie position tonight but some of the top guys have had their struggles lately. That has not been the case for Rinne who continues to be an elite option as he has gone 7-1-1 over his last 10 games(relief appearance for Saros in one) with a .947 save % and two shutouts. He leads the league in both GAA(1.69) and save %(.942) and is a huge reason the Preds rank #1 in defense this season. Tonight, he and the Preds are -185 favorites at home facing a Blues team that has been worse on the road scoring just 2.4 goals per game and have lost four of their last five games. Fire up Rinne in all formats.

Second in line for me tonight is Semyon Varlamov and while he struggled losing five straight at the end of October/start of November, he has bounced back nicely. He has now won two straight over the Oilers and Bruins improving his record to 6-5-2 on the season but more impressive is the .926 save % despite those recent struggles. He now gets a terrific matchup on the road against a Kings team that has scored over two goals just once in the last six games and rank dead last in offense on the season scoring just an average of 2.00 goals per game. The Avs are only small -115 favorites as of writing this so I will be using Varlamov primarily in GPP formats tonight.

Also Consider: Devan Dubnyk(MIN) in GPP formats as a huge -240 favorite at home vs. the Senators

With 14 games on this massive Wednesday slate there are a ton of top centers(MacKinnon, Seguin, Tavares, Malkin) and if you can afford them definitely go that direction. From a PTS/$ perspective, I will be going a different direction and building a more balanced lineup, especially for cash games. It starts with Jack Eichel who is on pace for a career-year in the NHL with 24 points in 21 games which leads his team and has him inside the Top 10 overall. Not only is there huge upside but Eichel is also providing an elite floor averaging over four shots per game with a 19.4 iCorsi/60. Making things even more appealing tonight is the matchup against the Flyers who rank 29th overall on defense allowing 3.6 goals per game. Fire up Eichel in all formats tonight.

Another mid-tier center who is performing at a career-high level is Brayden Point. He leads the #1 ranked offense in Tampa Bay with 26 points which is even more impressive considering they have Steven Stamkos and Nikita Kucherov on the roster. He also comes in red-hot with three straight multi-point games and has seen an uptick in shot volume with 27 over his last 10 games. The matchup also jumps off the board as the Bolts face a Panthers team that has allowed 16 goals in their last three games and now rank 26th overall on defense. All things considered, Point is in play in all formats and makes an excellent pairing with Eichel as your top two centers in a balanced lineup.

Also Consider: Mathew Barzal(NYI) as an upside GPP play that comes in cheap on both sites

If I told you the Habs traded two of their best offensive players in Max Pacioretty and Alex Galchenyuk in the offseason and would be in the top of the league in scoring at this point you would probably call me crazy. Well here we are and the Habs rank 12th in scoring with 3.24 goals per game and Drouin and Tatar have played huge roles in that. They sit tied for second on the team in points(17) and have done so in a very balanced way as Tatar has nine goals and eight assists and Drouin has seven goals and 10 assists. I list them together tonight as the Habs are in a great spot facing a struggling Devils team that has dropped 11 of their last 15 games while allowing 3.8 goals per game and sit 22nd in overall defense. Tatar and Drouin are split up on the top two lines and powerplay units and pairing them together gives you exposure to a large portion of their offense that could explode tonight. Both also average over 2.5 shots per game so this stack works in all formats.

I have mentioned Smith before as a value cash play as he is averaging over three shots per game with a 19.4 iCorsi/60. He hasn't shown much upside so far this season with just 10 points but that could start to change as Viktor Arvidsson has been placed on injured reserve and Smith has taken over his spot on the top line with Filip Forsberg and Ryan Johansen. The Blues have been better defensively on the road early in the season but at these prices with his new opportunity, he is a great play in all formats.

The sites are finally catching up on Giordano's value but still not fast enough as he is the 7th(DraftKings) and 9th(FanDuel) most expensive defensemen on this giant slate yet is averaging the fourth-most fantasy points per game. He has been even better lately with 11 points, 30 shots, and 23 blocks good for an average of 5.0 DraftKings/17.9 FanDuel points per game. The matchup is a bit tougher tonight against a Jets team that is 3rd in overall defense but considering his price and that he checks every box, Giordano is in play in all formats.

Like Giordano, Cole is a player I have mentioned several times early in the season and while his DraftKings price is starting to adjust his FanDuel price continues to hover in the sub $4K range. The upside is limited as he has just seven points on the season but does provide excellent PTS/$ value with shot blocking alone. He has 32 blocks over his last 10 games and is second(62) to only Kris Russell over the course of the season and is averaging 2.9 DraftKings/9.8 FanDuel points per game.