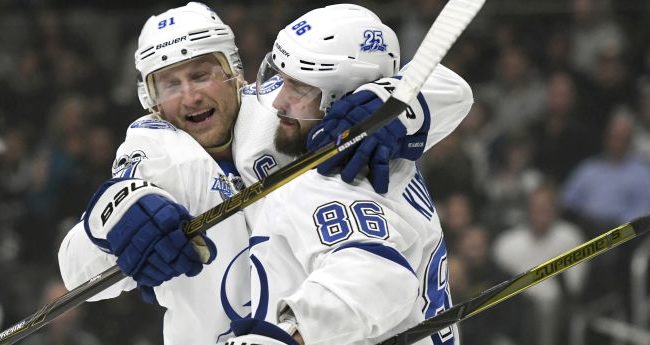 Happy Saturday hockey fans or as we like to call it North of the border, Hockey Night in Canada. We have a huge 11-game slate so let's jump in and take a look at some of the top plays in all formats then grab a copy of my NHL Cheatsheet and put it all together with the DFSR NHL Optimizer.

I will be paying right up at goaltender tonight as Connor Hellebuyck has everything going his way. He has been terrific lately winning seven of his last 10 games with a .914 save % and is a huge -220 favorite at home tonight where he and the Jets, as a team, have strong splits on the season(Helle is 14-6-1 at home and Jets are 19-6-2). He now gets an elite matchup vs. a struggling Ducks team that has lost 14 of their last 16 games and has scored two or fewer goals in 11 of those games. Hellebuyck isn't just a safe cash play but also has upside as he has faced north of 34 shots per game over his last 10. All things considered, Hellebuyck is a great pay in all formats tonight.

At this point, Lehner is slightly edging out Hellebuyck in our raw points projections and it makes sense. He has been outstanding lately going 8-1-1 with a .949 save % and two shutouts over his last 10 starts and now leads the league in both GAA(2.02) and save %(.931). Tonight, he and the Islanders are -170 home favorites against a Kings team that ranks dead last in offense and the only team to average under two goals per game on the road. I am picking on the California team tonight but I think both Hellebuyck and Lehner are great plays tonight.

I wrote up Larkin last night and will be going right back to the well tonight as his price remains in the sub $7K range on both sites. He once again checks off every box and it starts with the safety as he is averaging over 21 minutes of ice-time per game on the season with an above average 10.4 shots per 60 and 17.6 iCorsi/60 which has shown as he has 38 shots in his last 10 games. While he does play on a back to back tonight, so does his opponent who also ranks dead last in defense on the season allowing 3.7 goals against per game. Get Larkin into your lineups in all formats.

There are definitely some top-tier centers(Tavares, Matthews, Crosby) tonight that show up on my radar but I will once again be going the value route, at least in cash games. O'Reilly comes in red-hot with points in six straight and eight of his last 10 games(12 total points) and is not only providing upside but has 34 shots in that time giving us a high floor as well. He skates on the top line with Tarasenko and Schenn and also gets a plus matchup against a Blue Jackets team that has lost four straight while giving up 15 goals and rank 19th overall on defense. O'Reilly is a core play for my tonight in all formats.

Also Consider: Sidney Crosby(PIT) who should once again get added usage with Evgeni Malkin out or Eric Staal(MIN) who has been hot lately with 10 points in his last 10 games and faces a Blackhawks team who ranks 30th on defense

What stood out first when looking at the wingers was that the league leader in points was fifth in salary on DraftKings tonight. Kucherov put up a monster 100-point season last year and is currently on pace to crush that this season with 79 points in his first 50 games(1.58 per game) and also leads the league in powerplay points with 29. The shot volume isn't elite(8.6 shots/60 & 17.1 iCorsi/60) but he is getting over 21 minutes of ice-time per game and gets a plus matchup against a Rangers team that ranks 26th in defense. I don't think it's necessary to pay up for him in cash games on FanDuel but I will have shares in all formats on DraftKings.

The Arizona Coyotes have played some excellent defensive hockey this season ranking inside the Top 10 overall but the value with Meier is too much to pass up tonight. He comes in hot with 11 points(3 on the PP) in his last 10 games with 29 shots on goal and gets a ton of opportunity skating on the top line and second powerplay unit. When looking at my cheatsheet, the advanced stats really jump off the page as well as he enters tonight with an elite 11.4 shots/60, 20.5 iCorsi/60 while also averaging over 14 scoring chances per 60, 6.8 of them coming in the high danger area. At these prices, I will have exposure to Meier in all formats.

Also Consider: Vladimir Tarasenko(STL) on DraftKings at only $6K or Dominik Simon(PIT) as a value play in the low $4K range on both sites and skating top line with Sidney Crosby

While I would consider using him on both sites, Edler's biggest value by far comes on FanDuel where he is still down in the low $4K range. He doesn't give us a ton of upside but does have four points in his last 10 games but where he stands out is the elite floor as he has 28 shots and 25 blocks in those 10 games helping him to an average of 3.6 DraftKings/12.2 FanDuel points per game. He is my top cash game D-man on this FanDuel slate.

For value tonight on both sites, I will be loading up on Ryan Murray. He has provided a high PTS/$ floor with four or more combined blocks/shots in three of his last four games and has also shown some upside with seven points in his last 10 games. The block potential comes from heavy minutes on the penalty kill and while he isn't listed on the powerplay(looking at line combo sites) he has been getting some opportunity which does boost the upside a bit.

Also Consider: Thomas Chabot(OTT)  for GPP formats or Victor Hedman(TB) who has been in beast mode lately with five points, 20 shots, four blocks in his last four games