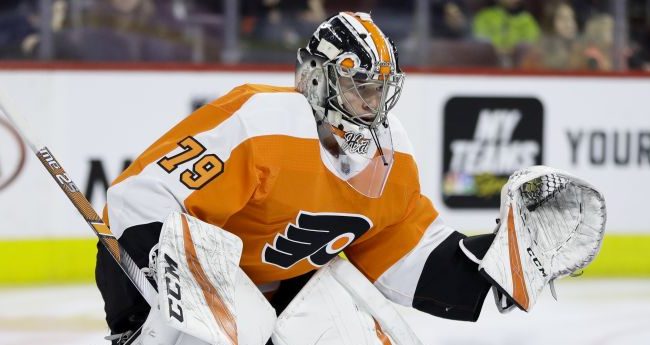 Welcome back hockey fans. After just one game on Friday night, we have a monster slate on Saturday that includes 14 games in total. The day starts with an early seven-game slate followed by a six-game main slate with one game in the middle that is only included on the all day slate on FanDuel. Let's jump in and take a look at some of the top plays at each position.

Not only has Carter Hart earned his place among the top rookies but he is also looking like one of the best goalies in the league lately. He comes into this afternoon's matchup having won seven straight and eight of his last nine starts while posting a .935 save % while facing an average of 35.8 shots per game. The price is rising fast but I am willing to pay up today in a terrific matchup against the Ducks who have lost six straight and 18 of their last 20 games while scoring two or fewer goals 14 times. Fire up Hart in all formats.

Also Consider: Tuukka Rask(BOS) who has been equally as good lately winning eight of his last 10 starts while posting a .947 save %

Goalie is a lot tougher on the main slate with Fleury, who I love at home, in a tougher matchup against the Blue Jackets, Holtby is the most expensive option and hasn't been great lately(.901 save % last 10), and Vasilevskiy faces a Crosby-led Penguins team. Instead, I will turn to David Rittich who has been terrific(20-4-4/.916 save %)  for the Flames who lead the Western Conference standings. While he doesn't face a ton of shots(30 shots/60) but has been consistent in holding opponents to two or fewer goals in 17 of his 32 starts this season. At the slight discount and plus matchup against the Canucks, Rittich is my top goalie on the slate in all formats.

There is a nice selection of top-tier centers today but most of them have tougher matchups so I will be loading up on a DFSR favorite, Jack Eichel. He was slow out of the gate after returning from an upper-body injury on January 11 but has since heated back up with points in six of his last seven games with 27 shots on goal. He should be able to keep rolling tonight in a matchup against the Red Wings who rank 22nd on road defense allowing 3.5 goals per game. All things considered, he is my top center on the afternoon slate and safe in all formats.

Also Consider: Mark Scheiffele(WPG) who has been consistent lately with eight points in their last 10 games with 26 shots and gets an elite matchup against the Sens who rank dead last in defense allowing 3.7 goals per game

If you have been reading the articles this week, you have likely been reaping the rewards of Kuznetsov and while the price is going up he is still the 11th and 8th priced center on DraftKings and FanDuel respectively. He comes in with points in five of his last six games including four multi-point efforts and 21 shots on goal. He skates on the second line but jumps up on the top powerplay unit with Ovechkin, Oshie, Backstrom, and Carlson adding a ton of value and now get a plus matchup against the Panthers who rank 29th in overall defense. Fire up Kuznetsov in all formats.

Also Consider: Tomas Hertl(SJ) in all formats or William Karlsson(VGK) as a salary relief value play in GPP formats

JVR isn't having the return to Philadelphia he had hoped for with just 25 points in 38 games and has also been limited by injuries. The good news is that the price is down, especially on DraftKings, and is currently slotted in as the top line left winger alongside Claude Giroux and Travis Konecny. More good news as he has been better as of late with nine points in his last 10 games(three multi-point efforts) and has also provided a stable floor with three or more shots in eight of his last 10 games. At these prices, JVR is a good play in all formats today.

Also Consider: Blake Wheeler(WPG) in an elite matchup against the Sens if you are paying up or Marcus Johansson(NJ) as a value play who has seen season-high ice-time on the top line with Taylor Hall out of the lineup

Kane is right at the top of the PTS/$ rankings tonight and it makes sense as he has been in beast mode lately and checks all the boxes. Since the beginning of the new year(14 games), Kane has tallied 19 points while skating mostly on the third line and even more impressive is the shot volume as he has averaged 4.9 shots per game in that time giving him an elite floor for cash games as well. The Sharks are on the road tonight but it hasn't mattered as they rank 2nd in road offense averaging 3.5 goals per game and come in red-hot winning four straight scoring 18 goals. Kane is my top PTS/$ play on the slate.

Also Consider: Valentin Zykov(VGK) as a punt play if he is back skating to line for the Golden Knights

The Jets are a great team to target all around today and I list all three of these D-men together as you really can't go wrong with either. Each player last 10 games stats:

Each player provides a nice PTS/$ floor for cash games and Byfuglien and Trouba have also provided some big upside. All three get an offensive boost this afternoon facing a Senators team that sits at the bottom of the Conference and rank dead last in defense. I wouldn't even be against stacking two of them in a lineup today but would roster any of them separately in all formats.

Also Consider: Rasmus Dahlin(BUF) in the mid-range as he has been consistent lately with eight points, 26 shots, and 12 blocks over his last 10 games

If you are a premium member you have probably noticed the trend with early season lineups using the optimizer. It absolutely loves stacking two high-end defense and it makes sense as players like Burns and Gio, at their prices, provide such elite floors for cash games as well as elite upside for GPP's. Tonight they are both on the slate and, at least on DraftKings, the lineups are liking stacking them here as there is a ton of value in other areas. Personally, I will likely be going with just one of the two Norris Trophy candidates. Burns comes in with 12 points in his last 10 games with a whopping 47 shots and 23 blocks while Gio who is slightly cheaper on both sites has tallied 14 points in his last 10 games with 29 shots and 17 blocks. You can't go wrong with either.

Also Consider: Travis Hamonic(CGY) who has minimal upside but is pretty much hitting value on a nightly basis lately with blocks alone. He has 18 over his last five games and 33 over his last 10 games