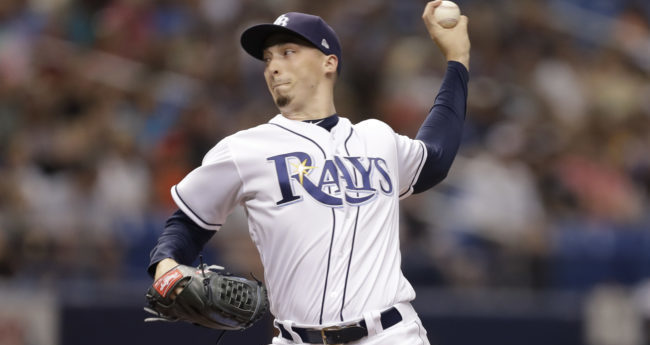 Snell is back ahead of schedule after breaking his toe and with the nature of the injury, I am not at all worried about the ace pitcher. After getting blasted on Opening Day by the Astros, he has been back on CY Young form allowing just one earned run over his last three starts with 33 strikeouts(50.8%!!!). After winning a CY Young, it is tough to find an area to improve but Snell has done it walking just 4.5% of batters through four starts and if that continues, he is going to be in the running once again. The matchup also stands out as the Royals have really struggled against lefties early in the year ranking 28th in both wOBA(.263) and wRC+(60) while striking out 26% of the time. Build around Snell in all formats today.

This is a case of trusting the much larger sample size(career 5.18 ERA, 4.27 xFIP, 16.4% K rate) or the hot start to the 2019 season. Lyles has been a pleasant surprise for the Pirates this season allowing just one earned run(.53 ERA) in three starts(17 IP) while striking out 18 at a 29% K rate. There is definitely regression coming as he sits with a 3.77 xFIP but that in itself is still very solid. The biggest difference for Lyles has been the curveball and changeup which he has started to use more since the start of last season. While his overall swinging strike rate is just 9.3%(league average) he is producing a 15.6% and 17.7% swinging strike rate on the curve and change. While the Diamondbacks sit Top 10 in runs scored this season they have been better against lefties and are just league average against righties while striking out just over 24% of the time in the split. From a PTS/$ perspective, Lyles is at the top of my list today.

The price has taken a big jump on both sites which is somewhat relative to the size of the slate but is also warranted with recent play. He went into Tuesday night with hits in nine straight and 11 of his last 12 games and is slashing .381/.509/.738 in that time with four home runs and 13 RBI. He is a switch hitter and has been pretty even when looking at the splits but gets a boost against Pomeranz who has really struggled against righties giving up a .403 wOBA and 1.9 HR/9 since the start of last season. Fire up Smoak in all formats.

It has been a roller coaster ride early in the season for Abreu who came out of the gate hot with hits in seven of his first eight then went cold with hits in just three of his next 10 games. He appears to be heating back up as he went into Tuesday night with six hits in his last 15 at-bats with two doubles and a home run. he now gets a plus matchup in easily his best split as he has hit lefties to the tune of a .402 wOBA, 157 wRC+, and .971 OPS since the start of the 2017 season. His opponent, John Means, has gone back and forth from rotation to pen so I am not expecting a long outing and that is more good news as the O's bullpen ranks second to last with an ugly 6.81 ERA and 21.9% HR/FB rate. The price is getting up there on DraftKings making the decision a bit tougher in cash games but on FanDuel, he is my top PTS/$ option in all formats tonight.

Santana is now with his third team in as many years and is picking up some extra playing time with Rougned Odor still out of the lineup. He has only appeared in eight games to this point but when in the starting lineup has hit second in five straight games. The price on DraftKings makes him a GPP only play with Merrifield just a couple hundred more but on FanDuel, he is another player that should get attention in all formats in the sub $3K range.

With a Verlander/value SP2 mix on DraftKings, we have options tonight at every position. Cano fits the balanced lineup approach as he comes at a sub $4K price tag on both sites. I am not too worried about the slow start(.235/.286/.412 slash line) as there are signs of a breakout. He comes into tonight with hits in four straight and eight of his last nine games with six extra-base hits. On top of that, he sits with a 42% hard contact rate on the season and just over 50% against righties. I like him best in cash games but will also have Mets stacks mixed into my GPP pool as well.

Also Consider: David Fletcher(LAA) if he is hitting leadoff

For his price, Marcus Semien has been a very consistent bat for both the A's and for fantasy owners. Through 25 games, he is hitting .309 and getting on base at a .377 clip thanks to a low 11% K rate and above average 10.4% walk rate. There is more good news as he is operating with a below average 17% line drive rate and if that were to get back even close to his career average(21%) his numbers could be even better. Considering the price on both sites and matchup against a struggling Drew Smyly, Semien will be a core play for me in all formats.

Also Consider: Freddy Galvis(TOR) if he should get the start near the top of the order against the lefty

I have Bogaerts and Correa very close at the top of my main slate ranks tonight but lean Bogearts for a couple of reasons starting with the discount on both sites. He has also been more consistent overall with a .276 average and .364 on-base percentage. The counting numbers(RBI, runs, HR) are down as the Red Sox offense has struggled to start the year but there is just too much talent throughout the lineup for that to continue much longer. Their opponent, Tyson Ross, has been decent to start the year with a 3.38 ERA, 4.32 xFIP but he has given up 42% hard contact rate which has led to four home runs against(21.1% HR/FB). All things considered, he is my top play at the position on the main slate.

Just like last year, Matt Carpenter has gotten off to a slow start but also like last year he is turning it around. He has hits in five of his last six games including two multi-hit efforts, four walks and two doubles and will continue to get a ton of opportunities hitting leadoff in front of Paul Goldschmidt. After the Rockies at home in Coors, the Cards are bunched together with a couple of teams in that next tier when looking at implied runs on the early slate and this feels like a buy-low for a talented player who appears to be catching fire.

The Pirates get a plus matchup on Wednesday against rookie Merrill Kelly who is walking over 10% of batters and sits with an ugly 1.46 WHIP. Moran continues to get a ton of playing time as a utility player for the Pirates and has been solid with a .289/.386/.526 slash line. He struggles against lefties but has been terrific against righties with a .346 wOBA, 119 wRC+, and .812 OPS in the split since the start of last season. For cash games, it is probably wise just to pay up a bit on DraftKings for a player with much more upside but on FanDuel, in the mid $2K range, Moran is one of my top PTS/$ plays.

While the righty-heavy A's have been much better against left-handed pitching for the season, they are still near the top of my list of teams to target on the early slate. They will face Jess Chavez who will be making a spot start with Drew Smyly being placed on the 10-day IL. He has come out of the pen this season and struggled giving up 15 hits and 10 earned runs in nine innings(9.31 ERA). I don't expect him to go deep here and that is music to the A's hitters ears as the Rangers have the fifth-worst bullpen ERA(5.06) and a 20.5% HR/FB rate.

My top target is Khris Davis who despite the low average(.244) and OBP(.299) has already hit 10 home runs and driven in 21. He has pretty even splits for his career but has shown big reverse splits since the start of the 2017 season with a .369 wOBA, 135 wRC+, and massive .301 ISO. mark Canha is always thought of as a lefty masher(overstating a bit) but he has been slightly better again righties early in the year and both home runs have also come against righties. If he is in the lineup, he is an excellent value on both sites.

I have somehow made it all the way to the end of the article without mentioning the Orioles who get one of the better matchups on the slate. They will face Ervin Santana who has gotten into trouble walking six and striking out just four over his first two starts and that has led to 10 earned runs with five long balls and a 41% hard contact rate against. That alone makes paying up for Trey Mancini worth it and adding to it is the fact he has been easily been their best player. He enters tonight with an elite .347/.406/.642 slash line and leads the team with six home runs and 22 runs scored and has also driven in 14. That is even more impressive considering the lack of talent around him. If you have the salary, he is most definitely in play in cash games but is probably best for GPP formats, especially on DraftKings where he has reached the $5K price range.