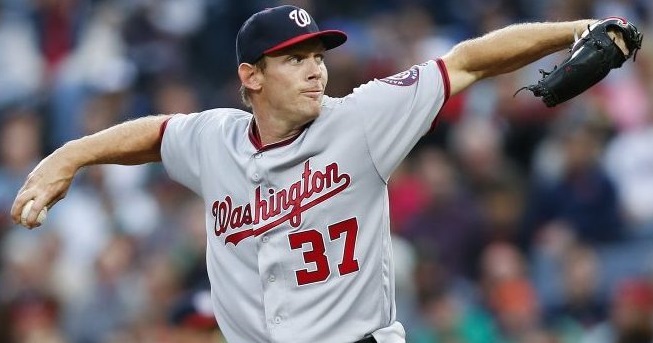 We have another wacky Thursday of baseball action with a six-game slate starting at 12:10 ET. Despite the smaller slate, pitching is not that bad and it starts with Strasburg who has been close to dominant since his rocky start to the season where he allowed 4+ earned runs in three of his first four starts. In six starts since then, he has held opponents to two or fewer earned runs in five starts(2.13 ERA) while striking out 59(34.2%) and walking just nine(5.7%). Today, he gets a matchup vs. a Mets team that does sit mid-pack in many offensive categories but have been worse against righties(.308 wOBA, 97 wRC+, .152 ISO, 24% K rate) and have struck out as a team 26% of the time over the last week. All things considered, Stras is my top pitcher in all formats.

If you are looking for an upgrade on your bats in cash games, Tanaka makes a ton of sense today as well. He is sub $10K on both sites and while he has given up five earned runs twice, he has been very consistent giving up just 10 combined in his other eight starts for a 3.09 ERA/3.79 xFIP. He doesn't have the same upside as Strasburg striking out just 22.7% of batters but gets the better matchup against an Orioles team sits with a .308 wOBA, 84 wRC+, and .164 ISO against right-handed pitching. There is a strong chance I run both Stras and Tanaka on DraftKings as there should be enough value with six games and on FanDuel, he is in play in all formats if you want to upgrade your bats.

Bell is easily one of the top pay up options tonight at any position. He is on an absolute torrid pace and has at least thrown his name into the conversation for NL MVP. He went into Wednesday night hitting .325 with an elite .396 on-base percentage with 14 doubles, 14 home runs, and a league-leading 44 RBI. On top of that, he is a switch-hitter and while he has been solid from the right side, he has been dominant from the left side with a .468 wOBA, 201 wRC+, .392 ISO, and 53% hard contact rate. While Senzatela has been better overall on the road, he is walking 12% of batters and sits with an xFIP(5.14) over two runs higher than his ERA(2.95).

The early season struggles are a thing of the past for the Red Sox as they sit third overall in runs scored over the past month. Today they get a matchup against Clayton Richard who is making his debut coming off a knee injury and while he will be limited, there is an opportunity to strike early on a pitcher coming off back to back seasons posting a 5.33 and 4.79 ERA while giving up 43 home runs. If paying up for catcher on DraftKings, Vazquez is my top PTS/$ option as he has always been better against lefties throughout his career and has been even better early in 2019 with a .466 wOBA, 193 wRC+, and .351 ISO. I also love the value on FanDuel in the mid $2K range considering you can play him in one of two spots(C/1B or UTIL). Both he and Sany Leon played the entire 12 inning game last night so be sure to check the lineups before plugging him in.

I was all over the Yankees in yesterday's article and I am going right back to the well again tonight. Hard not to as they went into last night scoring double-digit runs in three straight games and as I write this they have already put another seven on the board. Like yesterday, I will start with LeMahieu who leads off for the Yankees and has been very consistent with a .325 average and .368 on-base percentage. Today, he and the Yanks face Dylan Bundy who has been one of their better starters(better not great with a 4.66 ERA/4.93 xFIP) but is only going about five innings per start. That plays right into the Yankees hands as the O's are one of two teams with a 6.00+ ERA out of the bullpen. LeMahieu is a great play in all formats.

Middle infield is a great spot to find value and if you can't quite afford LeMahieu tonight, Frazier makes a nice pivot. He is nowhere near as safe as LeMahieu but does hit at the top of the lineup and stands out a bit more tonight in a matchup against Senzatela who is walking over 9% of batters overall while only striking out 15%. This should lead to more opportunities tonight and the discounted price(from other players at the position) should help get some bigger bats at other positions.

Torres was in my also consider spot last night at shortstop but today he is my main focus at the position on this slate. There are not many hitters who have been better lately as he is coming off a two-homer night last night and has hits in 11 straight and 23 of his last 24 games with eight home runs including three multi-homer games! That makes my mouth water as he faces Bundy who has given up multiple home runs in four of his nine starts and 11 total(18.6% HR/FB). There should be more than enough value at other positions to fit Torres in your lineups in all formats.

Neither of these two are everyday players, by any means, but with so many pay-ups on this slate, I will 100% be punting one or two positions tonight. I don't love the matchup against Lester whatsoever but this is a risk/reward play as both hitters have thrived against left-handed pitching.

They both have sample sizes attached to those numbers this year but it is consistent if we open up that sample size further. I won't be touching Kingery on DraftKings at his price but will play either on FanDuel in all formats.

I am going back to the Yankees at third base and will have a ton of Gio Urshela coming off a rest day. The 27-year-old never really did anything with his opportunities with the Indians or Blue Jays across three different seasons but is making the most of his new opportunity in pinstripes with Miguel Andujar being ruled out for the season. Over 38 games, he is hitting .336 with a .387 on-base percentage and even hitting down in the order, he has 17 RBI and 16 runs scored. I will have exposure on both sites but his best value is on Fanduel in the sub $3K range.

If you have the salary or plan on stacking Nationals Anthony Rendon is in a great spot vs. a homer-friendly Steven Matz but for cash, there is more than just Urshela I am targeting. Here is what I wrote about Vladdy yesterday:

After a very slow start to his long-anticipated major league debut, Vladdy struggled in the early going with just six hits in his first 41 at-bats. Manager, Charlie Montoyo then moved him up to the two-hole and that seems to be the point where it all turned around as he now has 12 hits in his last 41 at-bats(.292 average) with five walks and a .417 OBP. He has also flashed the upside we have all been waiting for with four home runs, three of which were absolute no doubters. While the price is starting to rise again, this feels like a buy-low against a struggling Rick Porcello, especially considering Vladdy has been much better against righties with a .397 wOBA, 151 wRC+, and 49% hard contact rate.

He didn't let us down and while he only had two hits in six at-bats in the marathon, he did connect with his 5th home run of the season. The price went up making Urshela the clear PTS/$ favorite for me on DraftKings but on FanDuel I am fine with both and will probably end up splitting them.

It has been a struggle for Betts against left-handed pitching this season but I am not at all concerned about the reigning MVP who has posted a .337 average, .439 wOBA, and 176 wRC+ combined over the 2017 and 2018 seasons. Overall, Betts is hitting just .289(low for his talent level) ut is walking 15% of the time and sits with a .398 on-base percentage which has also resulted in 40 runs scored which is tied for third in the entire league. He provides value in every area possible and while we can't play all the top priced plays, Betts is in consideration for cash and a leads my core when stacking Red Sox in GPP formats.

I couldn't pick just one other outfielder so I want to go over a few that are on my radar and will be in my player pool today. I mentioned the Pirates and their matchup and will be looking at Gregory Polanco and Starling Marte who hit in the two and three hole behind Adam Frazier. Speaking of Frazier's, I will also be targeting Clint Frazier(NYY) in GPP formats in my Yankee stacks with his .362 wOBA, 126 wRC+, and .266 ISO against righties. While I am not at all fond of the matchup against Aaron Nola, Kyle Schwarber(CHC) is a nice value considering he has power upside and has been leading off for the Cubs lately. More values could arise as lineups are released so stay tuned to our projections and lineup tool.