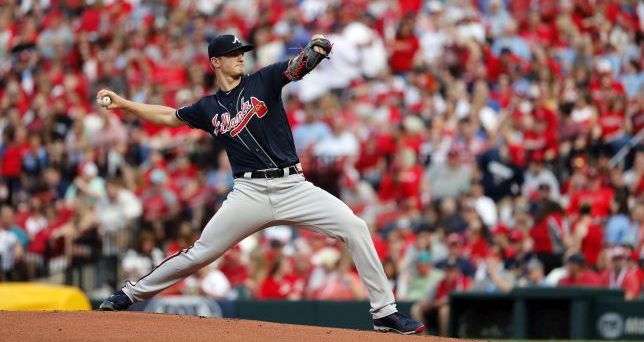 Wednesday brings us another full day of baseball. Let's look at core plays for the eight-game main slate.Now’s your chance to get DFSR PRO, which will give you access to our MLB and NBA optimizers and our new player lab! Get started for free by clicking the button below.

Verlander is clearly the most talented pitcher and top option from a raw points perspective on this slate despite the bad matchup against the Brewers. Verlander has been terrific since joining the Astros and while he is not quite on the same level as last season(outlier), he has still been great this year posting a 2.40 ERA, 31% K rate, and 15% swinging strike rate coming into tonight. The one argument that could be made against him is the xFIP(3.67) that is just over a run worse than the ERA which can be correlated to his minuscule .172 BABIP(.282 career BABIP). Digging deeper using baseball savant data, he sits with an xwOBA(.267) that is actually 17 points lower than his wOBA given up so I don't think he exactly fits the regression mold like other pitchers. Verlander has also been dominant against left-handed batters(2.99 xFIP, .183 wOBA, .250 SLG) and the Brewers are lefty-heavy so all in all, I Verlander in all formats on tonight's slate.

Doug and I talked about Soroka on the podcast last Friday and I made a strong case(in my opinion) for why the regression would not be as sudden for Soroka who is second overall with a 1.38 ERA. The xFIP(3.50) is just over two runs higher than the ERA and he is operating with a very unsustainable .219 BABIP but he also generates an elite 59% ground ball rate and a very low 85.3 mph average exit velo which is Top 10 among all starters. Pitchers who can generate that kind of ground ball rate and so little hard contact can definitely live with a higher xFIP. His composure at 21 years old is what stands out the most to me as nothing seems to ever get to him. Like Verlander, Soroka doesn't exactly get the best matchup tonight against a Pirates team that is better against righties but I am not worrying too much as overall, they are just league average in that split. With Verlander only a touch more expensive tonight, I think Soroka could once again come in under-owned as well. Either way, I like him in all formats.

Lucchesi is coming off a bad start where he walked a season-high three batters but it wasn't as bad as it looks. He only gave up four hits to the Nats but they came at the right times and Lucchesi helped them out with a season-high three walks. The good news is that he only gave up 6% line drives and over 50% ground balls and with the matchup tonight, I feel this is a great-bounce back spot. He and the Padres are -140 favorites against a Giants team that ranks dead last against lefties with a .270 wOBA, 67 wRC+, and .113 ISO while also struggling to a 74 wRC+ overall in the last 14 days. All things considered, Lucchesi is my top SP2 tonight in all formats on DraftKings and a terrific GPP pivot on FanDuel.

I normally only target the Orioles against lefties but tonight is different as they get a plus matchup against Edwin Jackson in a game with a Vegas total(11) that rivals those in Coors Field. It makes sense as Jackson has been BAD since returning to the big leagues with an ugly 11.90 ERA and while that isn't sustainable the xFIP(5.99) isn't much more promising. He has given up at least six hits and at least one home run in each of his five starts while giving up an average exit velocity of 92.5 mph with a 48% hard contact rate. Mancini is the only bat I am looking at for cash games and it comes at a position where the other top options on the slate have tougher matchups. Like many O's hitters, Mancini has also been better against lefties but unlike the others he has also been good against righties(.361 wOBA, 128 wRC+, .230 ISO). Fire him up in all formats.

It has been a long time since I wrote up Miggy as he is on the wrong side of 35 and definitely not the MVP he once was. The good news tonight is that he checks a lot of boxes starting with a value price on both sites which helps you to get a top pitcher with some other top bats. Overall, Miggy has actually been fairly consistent with a .296 average and .364 on-base percentage but lacks that 30+ or 20+ home run upside. He has also been better against lefties with a .488 wOBA and 214 wRC+ although a smaller sample size. All in all, I prefer him in cash games tonight but will have some exposure with a few Tigers stacks.

Also Consider: Mitch Garver(MIN) as a pay-up at catcher with elite splits vs. lefties or Justin Smoak(TOR) who is a switch hitter with plus splits against righties in an elite matchup

This game opens with a monster 11 Over/under and it makes sense with a matchup featuring Edwin Jackson and David Hess. The next thing that stands out, at least for the Jays, is that the DraftKings seems to have priced them accordingly with the matchup/vegas total while FanDuel has priced them according to their bottom three offensive ranking. With the expensive options at pitcher, I love the value tonight and it starts at the top of the lineup with Eric Sogard who has been the primary leadoff hitter this season. He really hasn't been more than average this season with a .273/.346/.453 slash line but the matchup and opportunity wins out here. He is GPP only on DraftKings but in play in all formats on FanDuel.

While he has struggled, the Phillies seem to be content with allowing him to work his way into the leadoff role and that is enough for me at these prices to consider a punt in the middle infield tonight. I also feel better knowing he was hitting .284 with a .342 OBP before being moved so it likely we see some regression to the mean. Opportunity is key and he gets that hitting in front of Harper and Hoskins and should be considered in all formats allowing you to load up at the power positions.

Also Consider: Brandon Dixon/Ronny Rodriguez(DET) who both have positive splits vs. lefties

We definitely aren't getting any discounts with the rookie shortstop who is fresh off an injury that caused him to miss a month. He picked up right where he left off upon his return and has hits in four of five games with a double and two home runs and is pushing his way back into the rookie of the year talks. He faces another rookie in Shaun Anderson who unlike Tatis, has struggled striking out just over five per nine with a 4.18 ERA and 4.37 xFIP over five starts. Tatis is my top shortstop and in play in all formats.

Also Consider: Adalberto Mondesi(KC) in GPP's with his price tag and worse splits against lefties or Yairo Munoz(STL) as a punt if back in the leadoff spot

The Twins are in a great spot tonight and open as big -230 favorites and top the Blue jays and Orioles with their 5.8 implied run line. At third base, a tough position to fill tonight, I will turn to whoever gets the start here and there is even a possibility they both start. Marwin has been a decent replacement while Sano was out but an even better value against lefties with his .353 wOBA and 121 wRC+. Since his return in mid-May, Sano's numbers look very familiar as he is striking out over 35% of the time but providing big upside with a six doubles, six home runs and a 142 wRC+ in those 17 games.

It is unclear if Hunter Dozier will return to the Royals lineup tonight and if he even if he does there is a chance Cuthbert gets another start. He has impressed in his limited time back in the bigs with hits in nine of 10 games including three home runs(not sustainable). He has also been better against lefties this season and throughout his limited career. If he starts, he will be one of my top PTS/$ plays at a tough position to fill tonight.

Like I mentioned with Sogard, the Blue Jays are priced with two completely different models tonight when looking at FanDuel and DraftKings. Another player who stands out is Lourdes Gurriel Jr. who has been terrific since getting called back up in late May posting a .327/.373/.727 slash line with five home runs over 15 games played. He has been much better against lefties but still above average(111 wRC+) against righties and I don't expect Hess goes deep here and the O's boast the second-worst bullpen ERA(5.67) in baseball. Same story as with Sogard, GPP only on DraftKings, all formats on FanDuel.

Castellanos is the other Tigers bat I am looking at building around tonight and for almost the same reasons as I mentioned with Miggy. While he hasn't been near as consistent(.262/.313/.443 slash line) as Miggy, he has been just as good against lefties with .371 wOBA, 134 wRC+, .237 ISO, and 51.5% hard contact rate. Add in the matchup against a struggling Danny Duffy(10 earned runs last two starts) and you have a nice value play in the outfield that can be considered in all formats.

Also Consider: Nelson Cruz(MIN) who went into Tuesday night with a home run in four straight and has strong splits vs. lefties to start the season(.443 wOBA, 182 wRC+, .424 ISO)