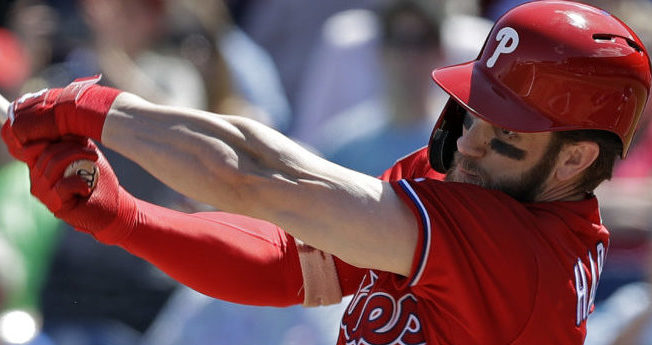 It isn't the most desirable slate for pitching and the gap in talent is huge at the top so I will be riding with former Cy Young/MVP winner, Justin Verlander. While it has been eight years since those awards, he has since finished runner-up in the Cy Young three more times and since coming to Houston has been one of the elite arms in the league. He comes into tonight with a 2.99 ERA(fourth-best in AL) and supporting 3.63 xFIP but where he really stands out is with his slate-high 32% K rate and 15.7% swinging-strike rate. The A's have been league average in terms of wRC+(100) against righties but this is no ordinary righty and JV showed this when he faced the A's back in June going eight innings, limiting the A's to four hits, one earned run, and struck out eight batters. Verlander is easily my top pitcher in all formats on both slates despite having to value shop at other positions.

For a value SP2, I will be looking to pair Verlander with Vince Velasquez. Despite having a rough start to his season(4.87 ERA, 4.74 xFIP), he has struck out over 26% of batters and faces a Tigers team near dead last in all offensive categories including a K rate just over 26%.

On the main slate, we have two plus options at the top of the salary in Shane "don't call me Justin" Bieber and Noah "Thor " Syndergaard and while I will have exposure to both tonight, I lean Bieber in cash games. He is #1 in my model tonight and second in raw points behind Verlander on the entire day. He is coming off one of his worst starts of the season against the Royals but has rebounded beautifully this season when giving up 4+ earned runs as he has followed each of those four starts with 9, 15, 7,  and 12 strikeout performances. Overall, he enters Wednesday night with a tidy 3.69 ERA and even better 3.14 xFIP which is fourth-best among all qualified starters in baseball and now faces a rebuilding Jays team that has been well below average against righties this season(.301 wOBA, 86 wRC+, 24% K rate).  All things considered, he is my top pitcher in all formats.

Keep in mind here that Santana is listed 2B/OF on DraftKings but I am not really recommending him there anyway. What stands out here is the price differential as he is just $3,400 on FanDuel while over $5K on DraftKings and while it's a small sample size he has been terrific since the All-Star break with hits in seven of nine starts with six multi-hit efforts. Miek Leake has been up and down all season and is coming off a complete-game shutout of the Angels but the Rangers have had his number with 21 hits and 14 earned runs in two previous starts this season. Fire up Santana on FanDuel in all formats.

The Dodgers are easily my top team to target on the main slate for a couple of reasons starting with their monster 5.6 implied run line. The park is not great but they get a terrific matchup against Jaime Barria and while his 7.60 ERA is due to drop, the 4.70 is not great and what I like the most is that he sits with a slate high(by a mile) 1.64 WHIP. Pederson doesn't provide a ton of safety with a .240/.329/.528 slash line but is still somewhat underpriced on FanDuel considering his opportunity at the top of the Dodgers lineup and provides a ton of upside with 23 home runs on the season. I will have a ton of Dodgers, starting with Pederson, in all formats.

Also Consider: Carlos Santana(CLE) on DraftKings where his price has dropped to $4,100(13th most expensive on the slate)

The Phillies top the implied run projections on the early slate(5.7) and also provide us with some much-needed salary relief. It starts with the matchup against Jordan Zimmerman who has been terrible lately allowing six or more earned runs in three straight starts pushing his ERA up to 7.51 on the season and the xFIP(5.39) is not that much better, all things considered. He doesn't give up a ton of home runs but neither of these guys is targeted for their power. Cesar is a switch hitter who has much better splits against righties with a .299 average, .341 wOBA, and 110 wRC+(.230 avg, 235 wOBA, 40 wRC+ vs. LH) and went into Tuesday's game with hits in four straight and 11 of his last 13 starts(big bump if hitting leadoff). Miller provides little to no upside but has been a decent punt averaging 6.0 DK/8.4 FD points per game over his last five and correlates nicely in the bottom half of the lineup is he and Cesar are hitting back to back.

Also Consider: Eduardo Escobar(ARI) if paying up or Robel Garcia(CHC) if looking for another value play
Main

I am going to carry over the middle-infield value strategy to the main slate and roll with Kolten Wong. I like targeting him and Dexter Fowler as top values when facing righties who really struggle against left-handed bats and Lyles smashes that profile. He has struggled to a 4.91 ERA/4.32 xFIP overall but has been so bad against lefties with a 5.11 xFIP and giving up a .408 wOBA, .591 SLG, and over two home runs per nine. Take the value in all formats and load up elsewhere.

Also Consider: Jonathan Schoop(MIN) as a GPP play with upside vs. a lefty prone to the home run

I really try to avoid the Orioles at all costs against right-handed pitching but Villar checks too many boxes today. He is one of the few O's with stronger splits against righties as he entered Tuesday night with a .327 wOBA and 103 wRC+ in the split and while that is barely above average, it matches up well tonight. He faces Taylor Clarke who has been knocked around in his rookie season as he enters with a 6.50 ERA, 6.01 xFIP and has given up 11 home runs in 10 starts(17.7% HR/FB rate). Hitting out of the leadoff spot, Villar is my top PTS/$ paly at the position on the early slate.

Shortstop is tricky tonight and will require some lineups to come out before any concrete decision can be made. With that said, Francisco Lindor(CLE) stands out at the top as he has been much better against righties(.36 wOBA, 126 wRC+, .246 ISO) and his teammate, Mike Freeman, makes a decent punt on FanDuel if he gets another start. I don't love the matchup as Stroman is an elite ground ball pitcher but the pickings are slim. Dansby Swanson(ATL) stands out much more on FanDuel in the top tier at a $1,000 less than Lindor and hits second in a powerful Braves lineup facing a pitcher in Brad Keller who is prone to the blowup game now and then(4.93 xFIP). Corey Seager(LAD) stands out as a top PTS/$ option as he has heated up since returning after the ASB with hits in six of his last seven starts.

I am not a fan of paying up at third base on the early slate as the top guys have less than intriguing matchups so I will just go all the way down and punt. Solano is one of the top PTS/$ plays, at least on FanDuel, which makes me feel better and adding to that feeling is the fact he entered Tuesday with hits in eight of his last nine games. I am not overthinking it here. If we are paying up for Verlander on the early slate we need a few punts to make it work so let's ride with one who has been decent lately.

With all the injuries to the Cardinals, utility player, Tommy Edman, has gotten a ton of playing time and while the price has caught up on DraftKings, he is still a terrific value on Fanduel. He doesn't walk(2.2%) really at all which keeps his OBP(.293) in the "cover your eyes" territory but he is getting a ton of opportunity hitting leadoff in front of a finally heating up(?) Paul Goldschmidt. More good news as he has been better lately with hits in five of his last six games going into Tuesday night. The decision is tougher on DraftKings but at his price on FanDuel, he is in play in all formats.

I talked about the plus matchup against Zimmerman above and the other Phillies bat I am locking in on today is Bryce Harper. I get he has been underwhelming once again with a .258 average and career-high 26.5% K rate but he has been much better as of late with a .306/.395/.528 slash line since the All-Star break that includes five multi-hit efforts. He is also coming a bit on the low end of his salary trend, especially on DraftKings where he is one of the top PTS/$ plays in the system. I will have exposure in all formats.

Also Consider: Domingo Santana(SEA) as a GPP pivot with strong splits against lefties or Nomar Mazara(TEX) as a value play

The Dodgers are my top team to target tonight and have two very affordable options in the outfield. It starts with A.J. Pollock who saw his season shortened by 2.5 months due to injury but has been terrific since returning with hits in six of nine games(.406/.459/.813 slash line) since the All-Star break with five of those multi-hit efforts and the power is back as well as he has four home runs in that time. Verdugo comes quite a bit cheaper on FanDuel and also gets a boost hitting second in the lineup behind Pederson and in front of Turner, Bellinger, and Muncy. Both players are top plays in all formats.

Also Consider: Dexter Fowler(STL) as a value play against Jordan Lyles who struggles against lefties