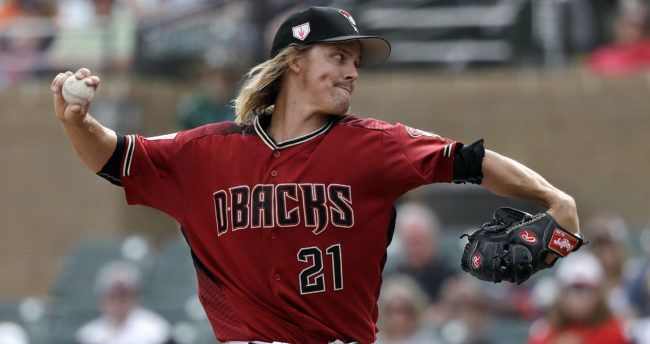 After a couple of wild games on Thursday, let's get into another awesome Friday slate. These are always the best of the week, with everyone playing night games. That's a DFS players dream and it makes it so much easier on us because all the lineups tend to be out and the weather is much more predictable. Early forecasts look good right now but be sure to check again prior to submitting lineups.

Was there any question that Greinke would be in this article? We're talking about one of the best pitchers in the game facing arguably the worst lineup in the most pitcher-friendly park in baseball. That's a recipe for success and it would be hard to imagine Grenike not throwing a quality start here. Since a bad start against the Dodgers in the opener, Greinke is pitching to a 2.54 ERA and 0.91 WHIP over his last 20 starts. Those are Cy Young caliber numbers and it really makes him an intriguing option against an offense who ranks bottom-three in runs scored, OPS and xwOBA. Not to mention, the Marlins are projected for just 3,5 runs, with Greinke entering this game as a -180 favorite.

The 4.69 ERA is not going to make anyone run to their computer to select Wheeler but he's been much better than that number would indicate. In fact, Wheeler's 3.66 FIP and 26 percent K rate tells us that he has some positive regression headed his way. While we're not really getting a discount in terms of price, we love that he gets to pitch at Citi Field against this weak offense. Not only does Citi Field rank as one of the three-best pitcher's parks in the Majors, the Pirates also sit 28th in runs scored and 25th in OPS since the All-Star break. That's why Wheeler enters this matchup as a -185 favorite.

Thames continues to be disrespected by these DFS sites and it really doesn't make any sense. Since joining the Brewers, he's done nothing but obliterated right-handed pitching. Since 2017, Thames has a .524 SLG and .882 OPS against right-handers. That's why he typically bats in the heart of this potent lineup and that's really scary considering this team is projected for five runs here. It's the price that keeps us coming back though, as he should be well above $3,000 on FanDuel and closer to $5,000 on DK.

This price has actually risen quite a bit and it's finally getting to a point where it should be. With that said, we still love Pederson anytime he faces a right-hander. Not only does he bat leadoff atop this dangerous lineup against righties, Pederson has all 23 of his homers this season with the platoon advantage in his favor. That's led to a .561 SLG and .910 OPS against righties, which is awesome for someone in this price range. While Anibal Sanchez has been better the last two years, he still ranks top-five in dingers allowed dating back to 2015.

Kipnis continues to be undervalued on these sites and it's really hard to understand why when looking at his recent form. Over his last 31 games, Kipnis is hitting .304 while generating a .487 SLG and .847 OPS. That's all you can ask for from someone in this price range, especially when they have a career OPS just shy of .800 with the platoon advantage in their favor. Jakob Junis is not a pitcher we're worried about either, with the Royals righty pitching to a 4.83 ERA and 1.39 WHIP this season.

We took a break from recommending Cano after a terrible slump but here we are again. That three-homer game kept us coming back for more and we're hopeful that this is the start of a big run. The simple fact is, this is a former All-Star who has a career ISO approaching .200 and a .360 wOBA for his career. That's huge from a guy who's always been better against right-handers and we have to hope that three-homer game is the start of something. It's the price that we really can't overlook, as someone with this much potential shouldn't be priced this cheaply.

This is the first of many Angels and it's easy to understand why when you see that big BAL next to their names. This is simply the worst pitching staff in the Majors and one of the worst all-time. That's evident by their 5.56 ERA, as they're well on their way to smashing a record for most dingers allowed. That puts all of the LAA bats in play and Simmons is one of the few guys you can actually get for cheap. The stud shortstop is actually hitting .281 this season while providing a .700 OPS. That's nothing special but it's good enough from a player this cheap in such a quality matchup. We'll go over that matchup more in our outfield write-ups.

This is the first time that I've written up Baez this season and it's easy to see why when looking at these prices. What we can't overlook is this matchup though, as Baez is in a great spot to succeed. The splits are the reason we love Baez, as he has a .619 SLG and .988 OPS against lefties since 2017. His numbers this season are even more absurd, generating a .370 AVG, .767 SLG and 1.180 OPS with the platoon advantage in his favor. Those are bonkers statistics and it definitely puts him in play against a guy who has a 3.84 ERA and 1.34 WHIP dating back to 2016 in a hitter's haven like Miller Park.

Guerrero has been a huge disappointment this season but the good news is that we're playing DFS. None of that mattered before and if anything, it makes us want to use him even more today. The reason for that is because his price is getting so cheap. I honestly believe we'll look at his price tag at this time next season and see it $1,000 higher on each site. This is a dude who's projected for 30-homers, 100-RBI and a .300-average. What we like here is that he gets the platoon advantage in his favor, with Guerrero posting an OPS north of 1.100 against lefties at the minor league level.

Yeesh, third basemen on this slate are tough. We shouldn't just dismiss Frazier though, as he's quietly had a resurgent season for the Mets. In fact, The Todd Father has .462 SLG and .807 OPS since May 22. That's an extended hot streak and it's really not indicative in this price. While Agrazal's season-long numbers are pretty good, his 12:10 K:BB rate and 6.14 xFIP indicates that he's been very fortunate so far this season.

We foreshadowed this in our Simmons write-up and we truly feel that the Angels are the best stack on the board. Facing the Orioles is a treat for anyone and that's why they're projected for more than five runs. While Asher Wojciechowski may end up being their best pitcher, a 6.02 career ERA and 4.74 career xFIP indicates that he's nothing special.

We really don't need to tell you why to use Trout, as he's simply the best player in the game. Let me say this though, Trout has 11 homers and 24 RBI over his last 14 games en route to an absurd 1.000 SLG. Ohtani has always proven that he can rake against righties, generating a .374 OBP, .618 SLG and .992 OPS against them for his career. While Upton has struggled this year, he's simply too good of a hitter to be priced at $3,900 on DraftKings. Any hitter with a .209 career ISO is worth a shot in this price range, particularly in such a tasty matchup.

Now that we got those Angels out of the way, let's talk about one of the breakout players of the year. We're talking about one of the best talents in the game, who's providing an .873 OPS. That's huge from a player in this price range, as Meadows was $500 more on each site not long ago. What we like here is that he gets to face a weak righty, with Meadows generating a .944 OPS against right-handers so far this season. This happens to be a bad righty too, with Waguespack pitching to a 5.50 ERA and 1.51 WHIP dating back to the start of last season, with most of those ugly numbers being accrued at the minor league level.