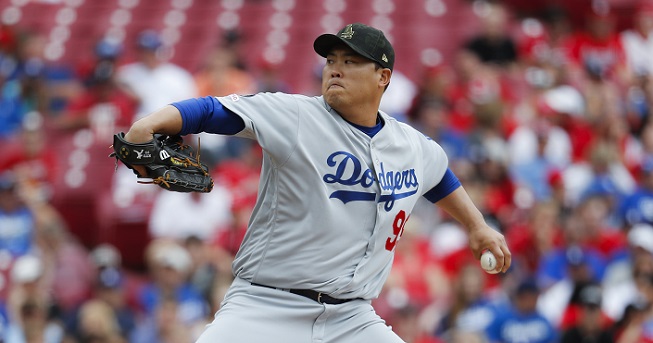 Hyun-Jin Ryu FD - P 7700 DK - SP 10400
Opponent - COL (Chi Chi Gonzalez) Park - LAD
FD - 35.94 DK - 19.76
After a tough stretch for Ryu where people were asking if he was cooked for the season, he rallied back with a masterful 7 IP 6K 2H 0BB 0 ER performance against the Mets in his last start. Now we are grabbing him at prices that assume he is done. It's funny how the clustering of certain instances can color our opinion of a pitcher. While the 4 BB start against Colorado was legitimately bad, the other two "bad" starts were mostly Ryu getting BABIP'd to death and getting chased from the game as a result. This is also a fantastic match-up. Don't let the Rockies' season long stats vs. LHP fool you - they have been the second worst team in all the Majors against left handed pitching this season when on the road, and this should be a spot where Ryu can thrive.

Jose Berrios FD - P 9400 DK - SP 10900
Opponent - KC (Glenn Sparkman) Park - MIN
FD - 38.02 DK - 20.17
Pitching is just a little rough on the main slate today, but Berrios is still a plenty playable option here. He hasn't replicated last year's K numbers, but he's still going for more than 6 IP a start with almost a strikeout per inning. That's plenty of production on these prices, especially in a solid match-up with KC. The Royals have been the 5th worst team in terms of wOBA against righties this season, and that was before they filled the bottom of their lineup with underqualified minor leaguers. Berrios is also an astounding -310 favorite, making him an excellent option for any format here.

Yasmani Grandal FD - C 3200 DK - C 4400
Opponent - PIT (James Marvel) Park - MIL
FD - 12.56 DK - 9.37
"James," you might be wondering, "Who on Earth is James Marvel?" Truthfully, I had absolutely no idea before I started writing this article. What I learned was that he was a 26 year old non-prospect in the Pittsburgh farm system that was flexing a 5.04 xFIP in AAA this season before being called up and being much worse than that in his 9 Major League innings. All this to say, I like grabbing one of baseball's best switch-hitting catchers on the better side of his platoon.

Christian Walker FD - 1B 2600 DK - 1B 3700
Opponent - SD (Cal Quantrill) Park - SD
FD - 9.23 DK - 7
The slugging D-Backs first baseman isn't an obvious play against a right handed pitcher in San Diego, but first base is pretty rough here and this is quite an attractive price. Walker has actually been a slight reverse platoon split guy this season, with an OPS about .030 points better against northpaws. He's got the kind of explosive power that doesn't really worry about park dimensions - if he gets into one, he can drive it over every fence. As for Cal Quantill, he's one of those righties you can't be too afraid of. He's fairly similar to James Marvel, actually. He's a 24 year old nearly non prospect who had a near 5 xFIP in the minors before repeating that futility in the Majors. He's probably a better pitcher on balance than Marvel, but he's still a guy we're happy to target for DFS purposes.

Vogelbach's season has followed a similar trajectory to Walker's this season, as a late-blooming power-hitting first baseman that ultimately didn't quite deliver on the promise that he flashed earlier in the season. Still, he's amassed 25 home runs against right handed pitching this season and he's facing a pitcher in Wojciechowski who is one of the most homer-friendly pitchers in the Majors. The O's righty has allowed exactly 2 home runs per 9 innings this season, which is a number he flashed in the minors as well. I love Vogelbach's upside here and honestly I can live with the floor when you take his walk rate into account.

Cesar Hernandez FD - 2B 2700 DK - 2B 4100
Opponent - CLE (Zach Plesac) Park - CLE
FD - 9.84 DK - 7.62
Hernandez found himself in the leadoff spot Friday night, and if that's where he's going to be against right handed pitching, he's almost a must play against Zach Plesac here. The 10/10 power speed profile isn't anything to write home about, but the sheer number of .340 OBP plate appearances he brings to the plate against Plesac are worth these bargain basement prices on their own. Hernandez's OPS has been .270 points higher against righties this year, and Plesac's 5.10 xFIP is a far cry from his 3.64 ERA. Given his lack of strikeout stuff, the Phillies are one of my favorite stacks of the main slate today.

Ozzie Albies FD - 2B 3500 DK - 2B 4200
Opponent - SF (Johnny Cueto) Park - ATL
FD - 10.22 DK - 7.9
We all know that Albies is a solid hitter who's much better against left handed pitching, so why grab him against Cueto here? Well, it's mostly because of who Cueto is. If you haven't followed his recent goings on, he's been pretty damned awful for the last two years, putting together a 4.51 xFIP and a sub 6 K/9 in the process. Don't be scared by Cueto's name - the Braves are a great stack in their own right today.

Jorge Polanco FD - SS 3600 DK - SS 4700
Opponent - KC (Glenn Sparkman) Park - MIN
FD - 15.09 DK - 11.69
Jorge Polanco is just flat out underrated at this point, both as a real-life player and a DFS option. His 22 homers and .850+ OPS are just elite for the position, and you can still get him at very affordable prices. As for Sparkman? Well, I'd roast him, but my mom told me not to burn trash. Okay, I have to admit that I stole that line from my 9 year old, so I guess I should still roast him. The 5.90 xFIP is just so comically bad that it hardly seems sporting to make fun of it, but let's just say that, if he qualified, the difference his number and the second worst number is the same as the difference between the 2nd worst and 14th worst. Sparkman is otherworldly bad. Just stack against him whenever you can.

With all of these bad pitchers going today, I feel like I should write "you should totally stack against this guy!" for almost all of them. Chi Chi Gonzalez is no exception. This guy's stats are almost exactly as bad as Glenn Sparkman's, except his walkrate is almost twice as high. His xFIP is .02 points "better" because of a higher ground ball rate, but I mean, you're happy to see any of these excellent Dodgers' bats in your cash game lineups. Seager, meanwhile, has recovered from his earlier season woes to currently sit at an .843 OPS against righties. I love him in any format.

Matt Chapman FD - 3B 3600 DK - 3B 4000
Opponent - TEX (Brock Burke) Park - OAK
FD - 13.61 DK - 10.26
We've made it to third base and haven't even mentioned Brock Burke yet, so you know today is just otherworldly great when it comes to stackable pitcher targets. The Rangers' young left hander hasn't managed to strike out 5 batters per 9 innings this season, and he's right there with Gonzalez and Sparkman as one of the worst pitchers on the slate, and also the entire Major Leagues. Chapman has wrecked left handed pitching for an .883 OPS this season in spite of an absurdly bad .223 BABIP against them, so he's a lefty-killer of the highest order. I love him in any format.

Sano is an absolutely hilarious player, to me. He's two years younger than Christian Walker, and has 5 more home runs than him in 156 fewer plate appearances this year. His Achilles Heel is well-documented, but man, grabbing him against these guys who literally couldn't strike out my three year old son just seems like an absolute no brainer. You can never call Sano safe, but the upside against a gas can like Sparkman is just nuts here.

Eddie Rosario FD - OF 3500 DK - OF 4800
Opponent - KC (Glenn Sparkman) Park - MIN
FD - 15.41 DK - 11.86
More homer-heavy Twins against the terrible Sparkman. Nothing to see here. Rosario's lack of walks will always make him a questionable floor option, but honestly the absurd upside you get in exchange at these reduced prices is well worth it against Sparkman today.

Khris Davis FD - OF 3100 DK - OF 3500
Opponent - TEX (Brock Burke) Park - OAK
FD - 11.82 DK - 8.8
We've finally exhausted the write-ups about all these terrible pitchers, so you know the drill by now. Davis is part of a huge grop of guys today whose main weakness (striking out) is mitigated greatly by a terrible pitcher who doesn't strike anyone out. With all of this insane value, I'm just backing up the truck in big tournaments today, and going for the gold.