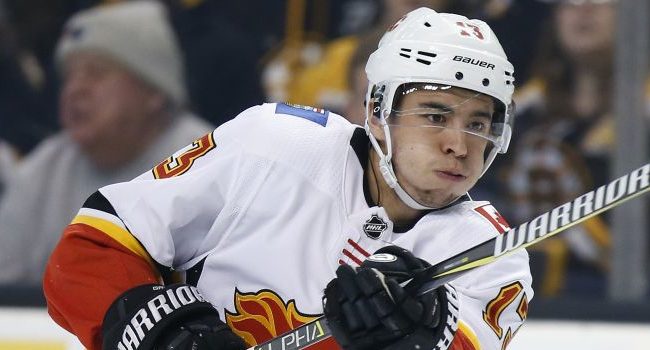 Welcome back hockey fans. Tuesday brings us a ton of action with eight games on the slate so let's dig in and take a look at some core plays at each position. After that make sure to check out the projection system and lineup optimizer where you can construct up to 50 lineups using the filters available.

After a terrible opener where he allowed four goals to the Avs in Colorado, Rittich bounced back in a big way saving all 34 shots he faced against the Canucks tallying the shutout in his home opener. He now gets another plus matchup as a -210 home favorite against the Kings who finished 30th overall in offense last season(2.43 goals per game) and while they scored five in a losing effort in Calgary, the lineup didn't see much turnover from last season leading me to believe they will once again be just an average at best offense this season. As the most expensive option on DraftKings, I am likely going another direction for cash games but on FanDuel under $8K, he is a great play in all formats.

The Red Wings definitely aren't a team on the immediate rise so it was quite a shock on opening night when they went into Nashville and beat the Preds 5-3. Howard allowed three goals but still made 39 saves and with Detroit's less than stellar defensive depth I see the shot volume for the goalie's continuing all season which gives them a high floor in advantageous matchups. One of those is tonight at home as the Wings are -130 favorites against the Ducks who finished last year ranked dead last in offense but are healthy and have started off the season 2-0 but have scored just five goals. When you factor in the sub $8K price on both sites, he is right near the top of the PTS/$ ranking and in consideration in all formats.

Monahan has had a great start to the year for fantasy scoring in both games and recording 11 total shots. That shot volume is especially important this season on DraftKings with the new bonuses available in their scoring system. He and the Flames now get a plus matchup against a Kings team that didn't just struggle offensively last season but defensively as well ranking ner the bottom in goals against(3.16 per game) and opened the season with a 6-5 loss in Edmonton. The decision is a little tougher on DraftKings where Monahan is the second most expensive option(at the position) but on FanDuel he is the 10th most expensive center and a near lock for me in all formats tonight.

The Hurricanes are one of the most balanced teams in the league and the first to three wins. They have also done so without their scoring leader from a year ago having recorded a point but don't worry as the volume is there as he has tallied at least four shots in each game and backed it up with an 18.4 Corsi per 60 and the scoring chances have also been there(12.6 per 60). Tonight Aho and the rest of the "Bunch of Jerks" get a plus matchup against the Panthers who have given up eight goals and an average of 32.5 shots per game in their first two contests. At these prices, you can fire up Aho in all formats.

Also Consider: Kyle Turris(NSH) who isn't getting Top 6 ice-time but gets opportunity centering the 2nd powerplay unit and comes in very cheap on both sites

The Predators are in a great spot tonight at home against a Sharks team that has been a dumpster fire both offensively(3 goals for) and defensively(12 goals against) to start the season. One of my favorite two-player stacks in cash games is Forsberg and Arvidsson as both provide a high floor with shot volume as each have nine shots through two games and back it up with a 25+ Corsi/60 as well. They have started the season skating on separate lines and I am ok with it for a couple of reasons starting with the fact it spreads out the exposure to one of my top team targets and they skate together on the top powerplay unit. Fire up one or both in all formats tonight.

I will be monitoring this situation closely when Penguins morning skate info comes out as Dominik Simon makes an excellent punt play on both sites if he is back up on the top line with Crosby and Guentzel. He didn't get on the scoresheet last game in terms of points but did get just over 17 minutes of ice-time and tallied three shots on goal. He isn't going to see many looks on the powerplay at this point but the price still makes him one of the top PTS/$ wingers on this slate and a terrific cash game play as a one-off or as a part of a Penguins top line stack in GPP.

Also Consider: Nikolaj Ehlers(WPG) if he remains on the top line with Wheeler & Scheifele. His best value is on FanDuel at just $5K

Once again on a larger slate, there are a ton of high-end defense options but I lean Hamilton here simply due to his PTS/$ floor over on FanDuel as he is still in the low $5K range. He is coming off a season where he provided a very high floor for fantasy averaging a combined 4.3 shot/blocks per game and from an advanced stat perspective, ran a high 9.6 shots/60 and 20.2 iCorsi/60 overall. He has picked up where he left off with nine shots and four blocks through three games and has also already recorded two multi-point efforts. He is a great play in all formats.

The middle tier is where I love to make my home on defense and Schultz stands out in a big way as his price is still down in the low $4K range on both sites. He dealt with injuries last season and now healthy, will be looking to get back to the 40 point level and with his situation, it should be attainable. He doesn't get the huge ice-time but is skating over 20 minutes per game and has provided a very high floor with 10 shots on goal already backed up by an elite 20.6 iCorsi/60. The upside is most definitely there as well as he gets time on the top powerplay unit with the big boys and face a struggling Jets defense. Fire up Schultz in all formats.