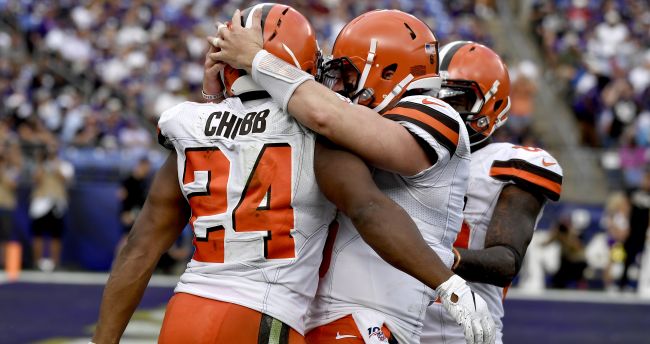 Welcome back football fans. Earlier in the week, Doug went over the top cash game plays and then he and James broke down every single game on the Mega Podcast. I will take a look at some possible leverage plays in GPP formats that should come with low ownership.

The mid-range is where a lot of people will be going for running backs this week and it makes sense as the tier is loaded with talent in plus situations. The chalk in this range is most definitely going to flow to Leonard Fournette and Le'Veon Bell who both have 20+ tags on FanShare at the moment. After those two, I think ownership then falls on Mark Ingram in an excellent matchup. Projecting things out, there is then a fairly big gap of ownership that I think we can take advantage of with Nick Chubb who is likely going to be sub 10% owned in GPP formats.

Like Fournette and Bell, Chubb gets a ton of volume sitting 5th overall in touches per game(21.8) and has made the most of them as he is also 4th in overall scrimmage yards per game(119.2). The Browns are a small home underdog(+1.5) against the Seahawks who have allowed the 4th fewest rushing yards to running backs but also the 2nd fewest attempts resulting in a mid-range 16th rank in DVOA against the rush. With the focus on Odell Beckham and Jarvis Landry in the passing game, Chubb is also not going to see a lot of loaded boxes to shut him down. In no way is Chubb safe in this spot or safe for cash games but at half or a third of the ownership as others in the same range, I will take a shot with his enormous upside.

Like I mentioned above, the mid-range running back tier is going to be popular this week which automatically pushes the masses to the top tier wideouts. Adding to this in Week 6 is the fact those wideouts(Julio Jones, DeAndre Hopkins, Cooper Kupp) all have plus matchups almost guaranteeing they are the Top 3 in ownership at the position this week.

My pivot up top($7K+ on DK, $7.5K+ on FD) will be with Amari Cooper who ranks out as a Top 10(pushing Top 5) wideout early in the season. He doesn't get the huge volume(8.6 targets per game) overall but is getting just over 26% of his team's target share and has been very efficient catching 74% of those targets. He not only has a nice floor and could be considered for cash games but also has the upside for GPP already with three receptions of 40+ yards(3rd most) and eight receptions of 20+ yards(6th most). The matchup is also a good one for Cooper this week as outside of slot corner Brian Poole who has been elite, the secondary hasn't been that good and has allowed the 10th most fantasy points per game to wide receivers.

Looking at things on Saturday morning, it appears there will be a good bit of ownership on Michael Gallup and D.J. Chark who both have 20+ tags at the moment. I am going to go down a bit further and get some exposure to Metcalf who will likely be 2-3% owned in GPP's and most definitely has the same upside as those wideouts.

He hasn't been efficient early in his rookie season catching just 12 of 26 targets(46%) and he has also yet to record a 100-yard game but that breakout is coming. He gets a ton of usage in the red zone with 11 red zone targets through five weeks(8th most in the league) and Wilson loves targeting him on deep routes as he has a ridiculous 17.8 average depth of target(6th highest). He now faces a tough Browns defense that does rank 11th in DVOA vs. the pass but with their struggling against the run everyone will be concentrating on Carson which should open up multiple play-action opportunities for Metcalf and Lockett downfield. Take the ultra ownership and huge upside and get Metcalf into some of your tournament lineups.

Other possible leverage plays: Patrick Mahomes(KC) could possibly be the 3rd or 4th highest owned QB on Sunday which presents an excellent opportunity considering his huge upside, Case Keenum(WSH) who could be a sub 1% option against the Dolphins dreadful defense, or Derrick Henry(TEN) at sub 10% ownership facing a Broncos defense that has given up the 6th most fantasy points per game to running backs