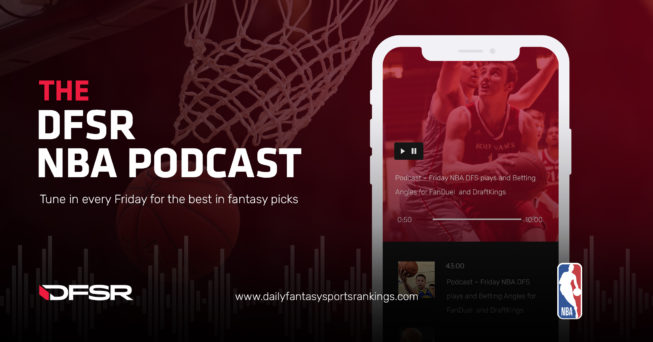 Basketball is almost back baby and the DFSR crew is already in midseason form with their DFS NBA Podcast for FanDuel and DraftKings.

Now’s your chance to get DFSR PRO, which will give you access to our NBA, NFL and NHL optimizers and our new player lab! Get started for free by clicking the button below.


With FanDuel and DraftKings releasing early pricing, the guys thought it a great chance to begin looking at the upcoming NBA season and give some insight into how they produce their projections and what this year will mean with such massive turnover in the NBA.

It’s a season unlike anything we’ve seen before with so much superstar upheaval and it could make for some interesting theories on projections especially early on. The guys use the first night’s games, a two-game slate, to give an inner look at how they think about things like usage, playing time and opportunity for players in new situations.

They discuss the new-look Pelicans, a Raptors team without their Finals MVP, how the Lakers will use their big-two and of course the Clippers who now have Kawhi Leonard but will be without Paul George to start the season.

Then they roll through some over/under season win totals on MyBookie.ag (Promocode: Overtime) with some thoughts about teams compared to last year and what it means to bet in this current iteration of the NBA.

You can also read some of our team betting previews where we've covered the New York Knicks and how we liked the over on their wins. We also covered the Brooklyn Nets and their prospects this season. And finally we took a look at the Portland Trailblazers.