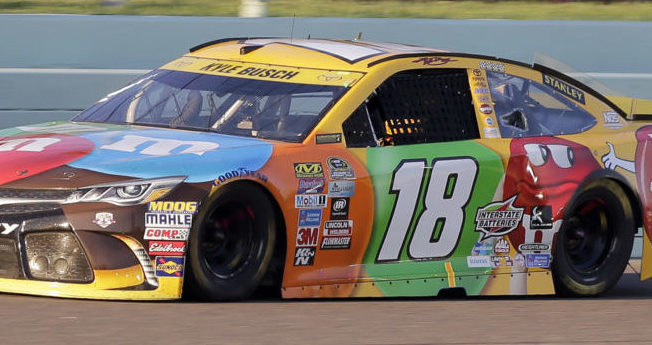 The Monster Energy NASCAR Cup Series heads to ISM Raceway this Sunday for the final elimination race of the season as four drivers will race for the Championship next week at Homestead. With wins in the previous two races in this round, Kevin Harvick(texas) and Martin Truex Jr.(Martinsville) have already locked up their spot at Homestead leaving just two spots for the other six drivers. Kyle Busch(+22) and Joey Logano(+20) are in the best positions to advance but, by no means, are safe will need solid races to hold off Denny Hamlin(-20), Ryan Blaney(-23), and Kyle Larson(-23). The only driving needing a win to advance is Chase Elliott who is 78 points behind.

ISM Raceway(formerly Phoenix International Raceway) is a one-mile flat track that not only got a new name to start the 2018 season but also seen a reconfiguration. The start/finish was moved from the backstretch to the old turn 2 right at the start of the dogleg which creates some crazy restarts. This will be the fourth race with the new setup. Let's jump in and take a look at some track and track-type history, playoff form, and then dive into the core picks.

Since the reconfiguration of ISM Raceway, no driver has been nearly as dominant as Kyle Busch who has finished 1st, 1st, 2nd in the three races. He has also led 100 or more laps in each of those races and is averaging a ridiculous 110.1 DK/88 FD points per race.

Kevin Harvick won the 2018 Spring race and is one of just three drivers with a Top 10 in all three races since the reconfiguration. His track history also goes much deeper as he leads all active drivers with nine career wins at the one-mile flat track with a very impressive 9.3 average finish. Harvick's teammate, Aric Almirola, is the only other driver with a Top 10 in each of the three races and he returns with back to back Top 5's at the track.

Teammates Martin Truex Jr. and Denny Hamlin join the above-mentioned drivers as the only five drivers with two Top 5's in the three races. Hamlin has been much better here over the longterm with one win, 12 Top 5's, and an 11.3 average finish over 28 races.

Kyle Larson struggled here in the 2018 Spring race but has rebounded with a 3rd and 6th place finish in his last two trips to ISM Raceway which is good news as he is over 20 points below the bubble. Ryan Blaney is also behind the 8-ball going into Sunday's race and will be looking to duplicate his success here in the Spring where he won the pole and finished 3rd after leading 94 laps.

Martin Truex Jr. and Kevin Harvick have already locked up their spots in the Championship Four and sit with an identical 6.2 average finish over the first eight races. Truex leads all drivers with three wins(Las Vegas, Richmond, Martinsville), 654 laps led, and an average of 83.5 DK/77.7 FD points per race. Harvick has just the one win last week at Texas but has finished Top 10 in seven of the eight races with four Top 5's.

Joey Logano and Kyle Busch are above the cutline going into this race which has much more to do with the points they banked in the regular season. Both drivers have been very up and down in the playoffs and sit 6th(Logano-13.0) and 7th(Busch-13.4) in average finish through the first eight races. The good news for both drivers is that they are coming off Top 10 finishes at Texas and Logano has Top 10's in both races in this round.

Denny Hamlin is 20 points behind the cutline after a 28th place finish at Texas last week but he still enters this race with the 3rd best average finish(9.8) during the playoffs.

Kyle Larson and Ryan Blaney both collected their first wins of the season in the last round and sit 5th and 6th respectively in average finish over the first eight races in the playoffs.

The Round of 8 has been a disaster for Chase Elliott and the #9 team and with finishes of 36th and 32nd is now 78 points behind the cutline and in need of a win to keep his Championship hopes alive.

Hard not put Kyle Busch at the top of the ranks this week. He returns to ISM Raceway with two wins and a runner-up since the track was reconfigured and he has also led 100+ lap in each of those races. He will now start from the pole and have another excellent opportunity to lead the most laps and win a third in a row. Fire him up in all formats.

In the mid-range, I am looking at Ryan Newman who has two career wins here at ISM Raceway and has been solid since the reconfig with finishes of 12th, 11th, and 11th. He hasn't shown very promising speed in practice but he will start 20th and gives us some cheap place differential upside and I am confident they find speed by race end.