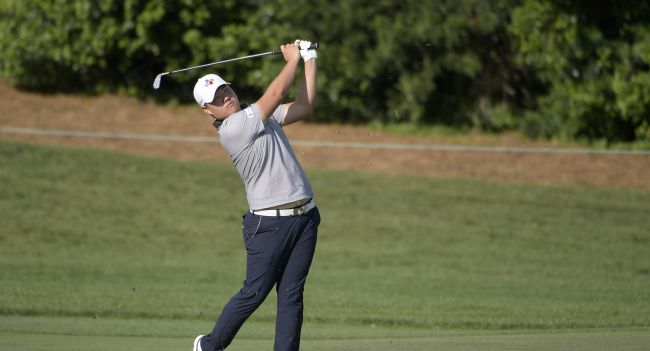 After an exciting Hawaii swing that saw both Justin Thomas(Tournament of Champions) and Cameron Smith(Sony Open) win in a playoff, the PGA Tour heads to La Quinta, California for The American Express. The event has taken on a new sponsor this year and you may be more familiar with one of its many former names(Desert Classic, CareerBuilder Challenge, Humana Challenge, and Bob Hope Classic). With the combination of this being a Pro-Am event and the Abu Dhabi HSBC Championship on the European Tour, we get a weaker field that includes just 11 of the Top 50 players in the world.

With a large amount of players on the course due to the Pro-Am, this event is also a three-course rotation with each player/Amateur getting one round on each course(La Quinta Country Club, Nicklaus Tournament Course, Stadium Course). The cut of Top 65 and ties will be made after Saturday's third round with all players making the cut playing their final round on the host Stadium course. All three courses are Par 72 setups and while all three have consistently ranked outside the Top 30 in difficulty, the Stadium Course is the hardest of the three. Either way, I will be keeping my model fairly simple this week and concentrating more on the approach shots and iron play when breaking down the ball striking metrics and looking for players who excel on the Par 4's, especially from 400-450 yards. Par 5 scoring and overall birdie or better % will be weighted very high as well with an average winning score of -23 over the past five years.

With the three-course rotation, we do have some interesting strategies we can employ for both tournament contests as well as the showdown contests. For starters, on the full week contests, I will be looking very closely at players who will be playing the Stadium course on Saturday giving them(if they make the cut) back to back rounds on the harder course which has shown to be advantageous in the past. Also, for Showdown contests try and focus most of your core(at least 4 of 6 players in lineup) on the players playing on La Quinta CC which is the easiest of the three courses.

With all that said, let's jump in and take a look at some core plays in each price range.

As of Tuesday morning, Sungjae leads all golfers in tags on FanShare and will be Top 5 in ownership this week but he is a tough fade as he checks almost every single box. He finished T12 here in his first trip to the event in his rookie season and comes into this year ranked #1 in my model. That is driven by form as he has already tallied five Top 25 finishes in his first seven events including a runner-up(Sanderson Farms Champ) and T3(Zozo Champ). He is also 1st in my custom model on FNGC ranking 8th in SG: Off the Tee, 10th in SG: Approach(8th in Proximity), 4th in Par 4 Scoring, and most importantly 1st in Birdie or Better gained. Put it all together and Im is easily my top play in the top tier this week and also worth an outright bet at 16-1 and is on my final list for one and done this week.

Despite not having any course history here, Scheffler comes in at #11 in my model this week on my sheet and Top 5 in my custom model on Fantasy National. After winning twice on the Korn ferry Tour last year, he has catapulted to the top of the PGA Tour rookie rankings through seven events with three Top 10's and five Top 25 finishes. Since the start of the season, he ranks 4th(in this field) in SG: Off the Tee, 21st in SG: Approach, 2nd in Par 4 Scoring and, 2nd in Birdie or Better %. The price is rising but still only at its third-highest point of the season and in this field, he is one of my favorite PTS/$ plays on DraftKings and FanDuel.

Since missing the cut at the season-opening Greenbrier, Knox has been very consistent making six straight cuts with just one finish outside of the Top 35. The upside has been capped early in the season as he ranks(in this field) 80th in Birdie or Better gained but I am not too concerned as he ranks 8th in Opportunities gained and is also 8th in SG: Approach, 5th in Proximity, and 8th in Par 4 Scoring. He also returns to this event with some course history having finished T29 and T18 in his last two trips. At these prices, Knox is in play for me in all formats and is another strong candidate for One and Done this week.

English is another player who stands out in multiple areas this week starting with his course history as he returns having made the cut in all seven career trips with two Top 20 finishes and is 6th in SG: Total here over the last 50 rounds. Despite a missed cut at The RSM Classic, he finished the fall portion of the season with some nice form having five of six cuts including four Top 10 finishes. Since the start of the season, he ranks(in this field) 6th in SG: Approach. 1st in par 4 scoring(3rd from 400-450 yards), 2nd in SG: Off the Tee, and 4th in Birdie or Better gained. All things considered, English will be in my player pool in all formats.

Looking at the cheatsheet this week, it appears it won't be too hard to stack multiple top tier players as about half of the Top 50 come in the sub $7,500 range on DraftKings. One of those is Cameron Tringale who comes in 5th in my model on the sheet and 8th in my custom model. he has struggled at this event in the last three years(T51, MC, MC) but comes in with much better form this time around having made all six cuts in the fall portion of the season with three Top 25 finishes. That success has come from his tremendous ball striking as he ranks(in this field) 21st in SG: Off the Tee and 5th in SG: Approach since the start of the 2019-20 season.  The PTS/$ floor and ceiling are there this week making him my favorite value play and I will also be placing a bet on him for a Top 20 finish.

Ryder isn't exactly a "safe" play for cash games making just 50% of his cuts in the fall season through eight events but he is intriguing for GPP formats in a stars and scrubs lineup build. He opened up his 2020 portion of the season at the Sony Open last week and after gaining almost four strokes ball-striking, he ended up with a T28 and tied for 30th in DraftKings scoring. He doesn't exactly stand out in the stats model but he does rank inside the Top 30(in this field) in SG: Approach this season.