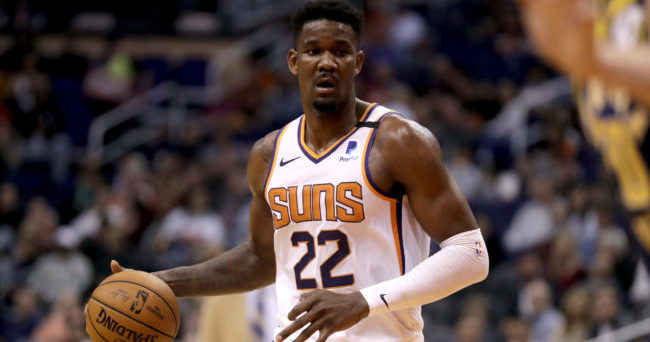 Super Bowl Sunday hangover? No worries because we've got the remedy. It's a bunch of NBA cash game picks for FanDuel and DraftKings.

Reggie Jackson FD - $4500 DK - $4700
Opponent - MEM
Proj Pts FD - 30.59 DK - 31.64
This play is dependent on a couple of different things. The first is that Derrick Rose sits Monday’s game out. He left early in the Denver game on Sunday because of a sore right groin and didn’t return. Th other factor is if the Pistons really have removed the minutes restrictions on Reggie Jackson going forward. I’m a little nervous that Jackson played 34 minutes in the overtime game against the Nuggets but I’m also encouraged that Jackson played 34 minutes in the overtime game against the Nuggets. He led the team with 18 shots and would be one of the slate’s very best bargains on both sites if the two factors above came to fruition. As it stands, I would probably only need to know Rose was out to feel comfortable playing Jackson at these price points.

Elfrid Payton FD - $6400 DK - $6500
Opponent - CLE
Proj Pts FD - 36.11 DK - 35.65
Payton sat out Saturday’s game after being suspended because of his role in the scuffle between the Knicks and Grizzlies on Wednesday. But he’s been the running the majority of the point guard minutes for New York, going 32 or more in each of his previous five games with an 11-point, 10-assist, six-rebound average in that timeframe. Because he’s able to add so many different stats across the line, he makes for a safer cash game play in this price tier with a matchup against a bottom third defensive team to boot.

If 27+ minutes is the new norm for Dejounte Murray (FD $5300 DK $5200) then he’s starting to look like a cash game play as well with real upside because of the defensive stats.

Spencer Dinwiddie FD - $7100 DK - $8000
Opponent - PHO
Proj Pts FD - 38.44 DK - 39.94
Kyrie Irving suffered what looked, at first, to be a major knee injury on Saturday night against the Wizards. But early reports were positive and it looks like only a knee sprain that will keep him out a week or so. We’ve been down this road before and know that when Irving is off the court Dinwiddie has an elite 33% usage rate. He gets to the rim and has shot a ton in this role when Kyrie missed two months. The price jumps a little but Dinwiddie is a high floor play against the Suns who are on the back-to-back after playing Sunday.

Also, he’s been pretty bad of late, but we should see more minutes and shots out of Caris Levert (FD $4100 DK $4700) who’s coming very cheap now on both sites.

Devonte' Graham FD - $6400 DK - $7500
Opponent - ORL
Proj Pts FD - 34.94 DK - 36.76
The last three games have been a problem for Graham. He was nearly ruled out Thursday against the Knicks because of an illness following the trip to France and he’s been ultra-bad in the short term. The shooting has been a particular issue, going 5-25 from three and 8-24 in total from the field. Nothing is dropping except for his price on both sites. He’s a complete bargain now because of some of this run-bad but is specifically a value on FanDuel at only $6400. The Magic don’t represent a great DFS matchup because they are slow and decent on defense, but I do think we’ve reached something of a breaking point with Graham on the salary.

Taurean Prince FD - $5000 DK - $5100
Opponent - PHO
Proj Pts FD - 26.43 DK - 27.56
Prince struggled through some early parts of this season, but he’s pulled it (mostly) together over the last couple of weeks. Last terrible game aside (we’ll get to that in a second) he’s been something of a fantasy revelation with a 17 point, six rebound, two assist line over the last three games. I do think with Kyrie out of action we see the minutes in the lower 30’s because of the cascading effects on the injury rotation piece. Prince is coming too cheap here for the usage and minutes bump and should see heavier ownership.

Kelly Oubre Jr. FD - $6700 DK - $7100
Opponent - BKN
Proj Pts FD - 37.82 DK - 37.63
Oubre’s such an interesting fantasy piece because his value is wrapped so much in the minutes of course, but he’s also increased the usage considerably since coming over to the Suns. Dude’s taken more than 15 shots per game over the month+ and has even jacked up 20 threes in the last three games. That should seem hard to do when sharing the court with Devin Booker, but it hasn’t appeared to be an issue. In a matchup against the Nets, Oubre should have plenty of opportunity here and is a good cash game play.

Draymond Green FD - $6200 DK - $6500
Opponent - WAS
Proj Pts FD - 33.67 DK - 33.23
Draymond wasn’t all that conventional a play on Saturday but he ended up going off against the Cavaliers and finishing with eight points, seven rebounds and a whopping 16 assists in just 26 minutes. On Monday he’ll get a chance to face another garbage defense when the Warriors take on the Hawks. Washington offers basically the best DFS matchup available considering they play a top-6 pace with the worst overall defensive efficiency in the league. This is a smash spot for Draymond as long as the minutes are there. The volume of possessions should be through the roof and there will be plenty of opportunity for the Warriors to score.

Kristaps Porzingis FD - $8000 DK - $7000
Opponent - IND
Proj Pts FD - 39.13 DK - 38.92
Zinger was given something of a maintenance day on Saturday considering it was the second half of a back-to-back. But we got to see what his stat lines can look like going forward with Luka Doncic on the shelf in the short term. Porzingis took 20 shots (the most on the team) and finished with 35 points and 12 rebounds in 36 minutes. The matchup against the Pacers isn’t quite as juicy, but Staps price hasn’t come up enough with the new opportunity. He’s especially enticing on DraftKings in the mid-$7K range. Strongly consider Nemanja Bjelica (FD $5600 DK $6000) against the Timberwolves.

Deandre Ayton FD - $8300 DK - $7700
Opponent - BKN
Proj Pts FD - 45.07 DK - 45.61
The Nets haven’t been outright bad against centers like they were last season, but this is still a fine matchup to target for Ayton. The big winner Ayton is the minutes floor being about as high as you’ll see for a traditional center. It wasn’t the case on Sunday because of the blowout to the Bucks, but when the game is close dude just runs. In the Suns last six games that weren’t obvious blowouts Ayton’s 35 minutes or more in all of them. He’s had eight double-doubles in the last 11 games and has defensive stat upside as well. He looks like an almost clear-cut cash game play against the Nets on Monday.

Jonas Valanciunas FD - $7200 DK - $7100
Opponent - DET
Proj Pts FD - 42.1 DK - 44.07
He’s tougher to trust than Ayton simply because of the run. From a points-per-minute standpoint these two aren’t really all that dissimilar with Jonas filling it up almost anytime he’s on the court. Over the last month or so Chewie has averaged 16 points and 11 rebounds in just 27 minutes per game. In the short term with the Grizzlies actually making a playoff push and some inury/suspension pieces around other bigs he’s been pressed into more minutes. He’s probably appropriately priced but that’s fine because there’s still some upside on the minutes.