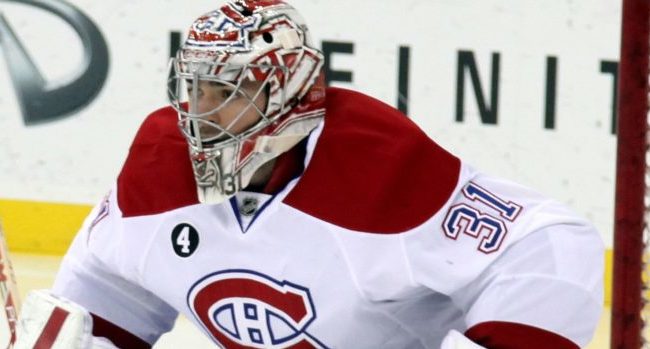 After a slow Wednesday on the ice, we are back with a huge 12 game slate on Thursday with no teams on a back to back and just one team(FLA) playing a third game in four nights. Let's dig in and take a look at some core plays for DraftKings and FanDuel at each position.

For a while, it appeared the Habs would not win another game(joking mostly) but they have bounced back in a big way winning seven of their last 10 games. Not only has the offense stepped up, Price has been terrific posting a .940 save % and two shutouts in his last 10 starts for an average of 19.4 DK/24.9 FD points per game. Tonight the Habs are at home as big -185 favorites against a Ducks team that ranks 28th in road offense scoring just 2.3 goals per game. The Price is right is tonight and he is a go in all formats.

Speaking of teams rising fast in the standings on the back of a hot goalie, the Flyers come into this one with a 7-2-1 record over their last 10 games. Elliott has been getting the lion's share of the work between the pipes lately with Carter Hart injured and comes into this one with shutouts in two of his last three starts and has won four of his last five. Like Price, he also gets a plus matchup against a Devils team that has lost six of their last seven games and rank 25th in road offense on the season scoring just 2.4 goals per game. I prefer Price in cash games on DraftKings but the decision is a little closer on FanDuel given Elliott comes at a $800 discount.

Also Consider: Semyon Varlamov/Thomas Greiss(NYI) in a plus matchup at home vs. the Kings 27th ranked road offense

There is definitely no shortage of elite centers on this slate and but what stands out right away is that McDavid is third in pricing no DraftKings. Sign me up! Not that MacKinnon or Eichel are bad plays but McDavid checks all the boxes tonight starting with his recent form having tallied 15 points and 38 shots in his last 10 games for an average of 17 DK/21.4 FD points per game. He now gets an elite matchup against the Sharks who have given up an average of 3.8 goals per game in their last six road games and rank 28th in overall defense on the season. If you need the couple hundred dollars on FanDuel, I am ok with building around Eichel as well but on DraftKings, McDavid is my favorite center in all formats.

The Flyers offense checks every box tonight and it starts with their home/road splits as they have scored just over a goal more per game on home ice this season. They now get an elite matchup against a Devils team that has given up an incredible 4.3 goals per game over their last 12 and rank second to last overall on defense for the season. If you have the salary and plan on going a more balanced route overall, I prefer Sean Couturier who centers the second line and powerplay unit and comes in hot with 11 points over his last 10 with 28 shots on goal. For value, in a more stars and scrubs build with McDavid/Eichel, I prefer Hayes who has also been solid lately with eight points in his last 10 games with 23 shots on goal and while he centers the third line, he also centers the top powerplay unit. Both Flyers centers are in play in all formats tonight.

Also Consider: Elias Lindholm(CGY) who has been outperforming his price for a while now with points in four straight and eight in his last 10 games

The Vegas Golden Knights sit second overall in the league in shots per game(34.1) and a large percentage of that can be attributed to these two wingers. Let's start with Pacioretty who may only have five points over his last 10 games but has added an insane 60 shots on goal and backs that volume up with a league-leading 25.8 iCorsi/60(shot attempts) on the season. If you need more savings at the winger position, you can also consider Marchessault who has 35 shots over his last 10 games and comes in with points in five straight and eight of those 10 games as well. These two skate on separate lines for the Knights but face a Florida team that has allowed the 8th most shots against and rank 23rd in defense on the season. Both players are in play in all formats tonight.

From a PTS/$ perspective, Joel Armia is right near the top of the list tonight on both sites. It starts with the floor he produces with shot volume and since making his return from injury, has three or more shots in six of seven games and is getting 18+ minutes of ice-time as well. He also provides us with some upside skating on the second line and powerplay unit and despite time lost to injury, is on pace to set career-highs across the board. At these prices in a plus home matchup, Armia is in play in all formats.

Also Consider: Gabriel Landeskog(COL) skating top line with MacKinnon, has points in five of his last seven games and 30 shots over his last 10. Best value is on FanDuel in the mid $6K range

I am going back to the Golden Knights for my top D man tonight. Shea Theodore checks almost every box and it starts with his mid $5k price on both sites despite near-elite floor as he comes in with 32 shots over his last 10 games while also adding eight points. He has also seen an uptick in ice-time(24.2 per game) over his last 10 games while skating on the second pairing and top powerplay unit. He is in play in all formats.

It's been a while since I mentioned Dumba being too cheap on FanDuel and to my surprise, that is still the case. He has been absolutely crushing value lately with eight points and a combined 48 shots/blocks over his last 10 games for an average of 11.5 DK/12.9 FD points per game. Even at nearly $5K on DraftKings he is creeping up on the PTS/$ rankings and because of this and a plus home matchup, he is in play in all formats.