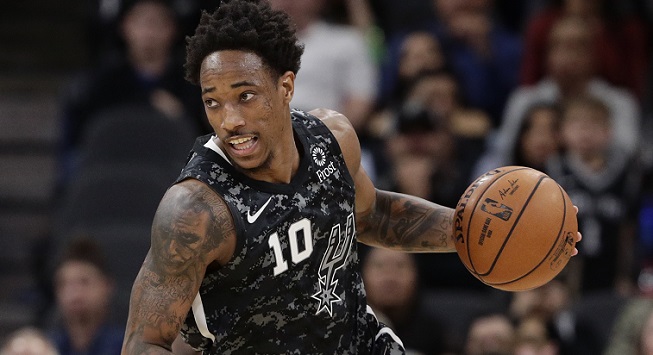 After a wild trade deadline on Thursday, this is one of the first slates with these new-look teams. The good news is that we don't have a whole lot of the trade participants on this slate and that should make it a little easier to figure it out. There is one day-game between the Bucks and Magic though and we'll go ahead and skip that since its not part of the main slate. That leaves us with eight games, so, let's go ahead and get into it.

When Kyrie Irving is out, Dinwiddie is always one of the best options on the board. If you look at the first 32 starts that Dinwiddie made for Irving, he averaged 38.4 fantasy points per game. That's no surprise when you see that he led the team in usage rate (29 percent) and minutes played (35), as the focal point of this offense. While he's struggled in the last two games without him, a 32-game sample size is obviously way more reliable than a two-gamer. That recent slide has lowered his price to a number we can't overlook either, as Dinwiddie was $2,000 more on FanDuel in the midst of that expanded role.

Jackson has established himself as the Pistons go-to player. The reason for that is because Blake Griffin, Derrick Rose and Luke Kennard are all injured while Andre Drummond is now playing in Cleveland. Recently Jackson has led the team with 16 shots per game and 29 percent usage rate. He's averaged 29 fantasy points per game since his return from injury, after dropping a season-best 48.3 DraftKings points on Wednesday. The best part of all of this might be the matchup though, facing a Knicks team who sits 22nd in defensive efficiency.

Jamal Murray is coming off a 31-point gem in his most recent game and gets a good matchup against Phoenix here.

The shooting guard selections on this slate are hard to trust but DeRozan is easily one of the most reliable options out there. That floor is really evident when you see that he has at least 29 fantasy points in 22-straight games while averaging 43.2 DraftKings points per game in that span. That's more indicative of a player closer to $9,000 and it's hard to understand why these DFS sites are keeping him in this price range. We also really like the matchup against Sacramento, with the Kings owning a 22nd OPRK against shooting guards according to DK.

LeVert is in the same boat as Dinwiddie, stepping up his game with Irving off the floor. While he didn't ball out too much earlier in the year with Irving out, LeVert is one of the league leaders with a 36.3 percent usage rate since Irving's most recent injury. That led to him scoring at least 39 DK points in both of those starts, making him one of the best values out there in the $6,000-range. While Toronto is a tough matchup, these price tags take away any most of that risk.

R.J. Barrett just returned from injury and is in consideration below $5,000.

LeBron is always one of the most reliable options out there. Amazingly, King James has at least 42 DraftKings points in 40-straight games while averaging 51.7 fantasy points per game in that span. That 42-point floor is the real treat here and there's simply no one else in the league with that sort of floor, especially with him averaging 55 fantasy points per game for the season. Reaching that should be no problem against a defense like this, with Golden State ranked 25th in defensive efficiency. That was on full display when James dropped 52.5 DK points in his one meeting with the Warriors earlier this season despite playing just 26 minutes. That limits the inevitable blowout risk.

When Luka Doncic is away, the rest of the Mavericks get to play. More importantly, they get to shoot and that's big news for a guy like THJ. In the last six games without Doncic, Hardaway has taken at least 13 shots in all of those while posting a 25 percent usage rate. That has led to him scoring at least 25 DraftKings points in all but one of those games and it's clear that he's a go-to scorer in Doncic's absence. The icing on the cake here is the matchup though, with Charlotte sitting 27th in both defensive efficiency and fantasy points allowed to SFs.

Jarrett Culver and Josh Okogie should play 30+ minutes for Minnesota with Robert Covington and Andrew Wiggins gone and that puts them squarely in play.

If you think THJ has an expansive role because of Doncic's absence, wait until you see these Porzingis' stats. Coming into Friday, KP had at least 45 DraftKings points in the eight fixtures that Doncic missed. That's really no surprise when you see that he's posting a 30 percent usage rate in those fixtures while bumping his rebounding rate by 25 percent. He didn't quite reach that total on Friday but foul trouble can end an impressive stretch like that. Porzingis getting to play center here is also big news, with the Hornets allowing the most fantasy points in the league to opposing centers this season.

Stepping into expanded roles for injured players is a major theme in this article and Ibaka is surely one of those guys. It's the absence of Marc Gasol that's really added to his value, with Ibaka stepping into starting center duties in his absence. If you look at the 17 games that Gasol has missed this season, Ibaka is averaging just shy of 35 fantasy points per game. He's carried over that form in Gasol's most recent absence, scoring at least 30 fantasy points in seven-straight headed into this matchup while averaging 37 DK points per game in that span. Getting to face the Nets is simply a bonus, with Brooklyn owning a 28th OPRK against opposing centers according to DraftKings which is where we expect Ibaka to play most of his minutes.

Anthony Davis against Golden State is obviously a good play.

It's a tough match-up for Ayton, and it's a tough night at center in general. But he's also playing 38-40 minutes in close games, and got a rest on the front end of the back to back as the Suns shocked the world by blowing out the Rockets. The Suns will need his size against Jokic, and a mid 40s fantasy total looks like a very safe bet here.

We offered up some higher-end guys like Porzingis and James earlier, so, let's give you a couple of cheap centers. While Turner has been having a down year by his standards, he's simply too good to be priced this cheaply. We're talking about a guy who's averaging 26.8 DraftKings points per game for the season which is more indicative of a $6,000-player. While he's not a great value, facing a Pelicans team who sits 24th in defensive efficiency and 28th in points allowed certainly sweetens the deal.

Looney is certainly risky but he has a ton of upside in this price range. This is a dude who was flirting with $7,000 in last year's playoffs and many people expected him to have a breakout year this season. While injuries have obliterated any of those notions, a season-high 18 minutes and a season-best 24 DK points on Wednesday against Brooklyn would indicate that he's close to full health. Some of the trades also indicate that GS thinks he's close, shipping off Omari Spellman and Willie Cauley-Stein at the deadline. That leaves a thin frontcourt absolutely dismantled and there's plenty of opportunities for him to succeed if he can just stay healthy. If this doesn't work today, keep an eye on Looney for the next few weeks.

Derrick Favors has been playing limited minutes but remains a solid choice against an Indiana team that surrenders the fourth-most fantasy points to opposing centers.