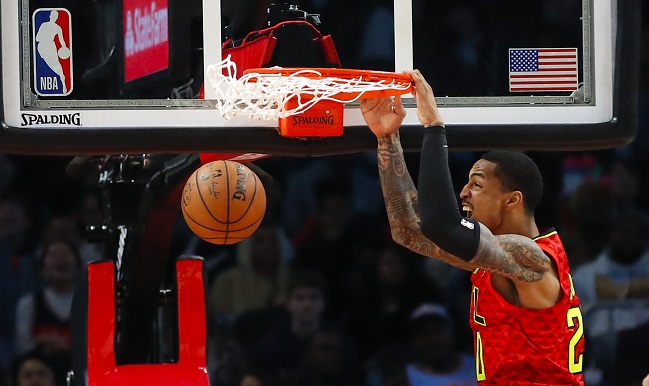 Kendrick Nunn FD - $4900 DK - $5600
Opponent - POR
Proj Pts FD - 27.08 DK - 27.92
With Butler already ruled out, the Heat are all very much in play again today. Nunn saw reasonable cash game play last game, and while he didn't knock your socks off, he did put together a perfectly respectable 25.7 FanDuel points. And honestly, that looked like his floor. Nunn shot just 6 of 19 from the field and his teammates left a few of his assists on the table as well. Nunn is a good shooter, and Portland's back court isn't exactly known for their defense. I think he bounces back and is an excellent cash game play here.

JA Morant FD - $6200 DK - $6300
Opponent - WAS
Proj Pts FD - 36.41 DK - 37.5
Your run of the mill DFS players will look at Morant's game log and proclaim that he has been "struggling recently," and elect not to play him. Not this DFS writer. Morant has been involved in literally 5 straight blowouts, and we know that in normal game scripts he gets a 32-34 minute rotation. He's $1,000 cheaper than his peak prices, and going up against a Washington team that represents literally the league's best DFS match-up is a great way to get back on track.

Keep an eye on the Trae Young situation. If he sits both Teague and Goodwin would be squarely in play.

Kevin Huerter FD - $5000 DK - $6100
Opponent - NY
Proj Pts FD - 31.78 DK - 32.82
This play is mostly fueled by Trae's potential absence, but has plenty of legs even if Trae plays. Huerter has been playing 36-42 minutes in close games, and while blowouts are always a risk for the terrible Hawks going up against a terrible Knicks team that also lost one of their best scorers certainly makes this a little bit more appealing. You can't play Huerter on DraftKings if Trae plays, but on FanDuel I think he's a great option either way.

With Kawhi likely sitting on the second half of this back to back, Patrick Beverley likely sitting again, and Paul George still on a minutes limit, the rest of the gang is in a great position to do a little work in a great match-up with the Cavs. Williams has seen a reduced role as of late, but this amount of opportunity means Lou Will is likely 20% too cheap. The starting minutes the Clips are leaving on the table also make this game a little closer, which can only benefit Williams as well. He's looking like a great FanDuel cash option.

Harris saw huge cash game ownership in the Sixers last game against Memphis, and rewarded his owners with his second straight 41+ FanDuel point performance. With Embiid questionable for this one (and absolutely not himself regardless), and small forward being very shallow, I think Harris will be highly owned again. This is a classic value play, where Harris has basically been worth this price all season and now gets a plus spot thanks to the match-up with the Bulls and Embiid and Richardson being banged up.

From here, there are a bunch of options that all look pretty similar to me. Cheap plays, with big question marks. Chandler Hutchison could be great if he gets his full run against the Sixers, but how likely is that given the skill gap between the two teams? Eric Gordon has been okay at times with Westbrook out, but will Covington take too much away from him? Both Carmelo and Ariza are playable, but are they exciting? How about Joe Ingles in a pace up match-up with Houston? Can we finally trust Deandre Hunter to perform in a nice match-up with the Knicks?

At this point I can't say I'm super confident in any of these options, and I'm hoping for more clarity to come (likely from players sitting) as we get closer to lineup lock.

Keep an eye on the Marcus Morris situation. If Kawhi sits and he plays on Sunday he'll be a great value for cash games.

John Collins FD - $7800 DK - $8700
Opponent - NY
Proj Pts FD - 47.31 DK - 48.62
In case you missed it, Collins has been absolutely putting on people recently, averaging better than 43 FanDuel points a game over his last six in spite of only recently flexing into his full 38 minute rotation. He's an incredible play if Trae misses, but honestly a great play either way. The Knicks are simply awful at defending power forwards as well, allowing the sixth most fantasy points per game to opposing fours this season. I love Collins in every format tonight.

Bam has essentially been a rich man's Collins recently, and while I slightly prefer Collins if Trae sits, I think Bam gets the nod if he doesn't. We already know Butler is out, and we also know that Bam has gone from shooting around 10-11 shots a game to 15-16 in his last couple. The increased usage and his across the board contributions give him one of the highest points per dollar floors at the position on any given night, and on a shorter Sunday slate we'll take that safety right to the bank.

Jonas Valanciunas FD - $7000 DK - $7100
Opponent - WAS
Proj Pts FD - 41.62 DK - 43.32
We never really need to worry about the per-minute performance when we consider Valanciunas, but the opportunity does seem to come and go based on how well he's performing. The good news? It's going to be pretty tough to underperform against the Washington team. Not only do they allow the 3rd most fantasy points per game to opposing centers, they also don't really have anyone that can get JV in defensive hot water (or foul trouble), leading me to believe that this will be a 30-33 minute game for him. I suspect he'll be by far the highest owned center on the slate as a result.