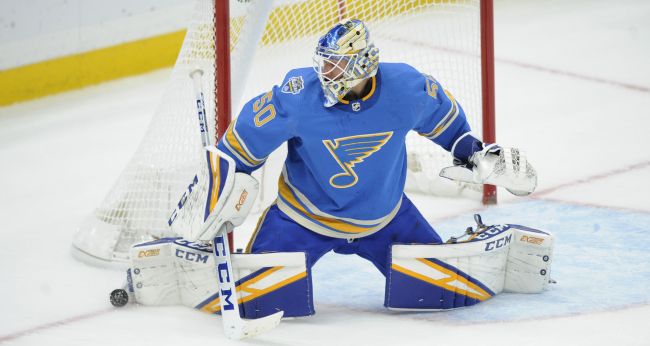 It is that time of the season where teams are separating themselves after the trade deadline to make a push for the playoffs. This creates some exciting hockey to watch and also ramps up the fantasy games as well. Thursday brings us 10 games so let's jump in and take a look at some core plays for DraftKings and FanDuel at each position.

Much like last night, the goalie position is a tricky one for multiple reasons and it starts with Vasilevskiy. I have talked about him and used him a ton lately but his hot streak came to an abrupt end as he has now dropped three straight while giving up 16 goals against. I am not too concerned tonight considering the quality of goalie combined with the matchup against a Blackhawks team that has dropped nine of their last 11 games and rank outside the Top 20 in overall offense on the season. I will have exposure to Vasilevskiy in all formats.

If you are at all concerned about Vasilevskiy(I am not), Jordan Binnington is most definitely in play tonight. He is coming off a game where he gave up five goals but still got the win which was his fourth straight giving him a 28-11-7 record on the season with a .911 save %. Tonight, he is in a plus spot at home as a -165 favorite against a struggling Islanders team that has lost five of their last seven games scoring just 13 goals and rank 29th in road offense overall. Fire up Binnington in all formats, especially on FanDuel in the mid $8K range.

There isn't much to get excited about this season if you are a Red Wings fan as they sit dead last in the standings but for fantasy, Dylan Larkin jumps off the page. It starts with his elite floor as he is averaging over three shots per game on the season with almost a block per game as well and has been red-hot lately with points in four straight including two multi-point efforts. He and Detroit now get a plus matchup at home against the Wild who have given up 14 goals in their last four games. It is a bit closer on DraftKings in that top tier but Larkin is easily my top PTS/$ play at the position on FanDuel.

There are more top tier centers(Matthews, Point, Pettersson) in play tonight but it will be very difficult to avoid the value with Backlund in the sub $6K range. He has been one of the hottest players in the league lately with 15 points in his last 10 games and it's not just the upside that stands out as he has also tallied 33 shots on goal in that time giving him a high PTS/$ floor. Despite this tremendous run, the price continues to stay in the $5K range making him a top PTS/$ play in all formats.

Also Consider: Brayden Point(TB) who centers Kucherov/Stamkos and gets a plus matchup against a struggling Blackhawks defense or Evgeny Kuznetsov(WSH) who has been moved to the top line with Alex Ovechkin

It has been a quick transition for Toffoli since the trade from Los Angeles to Vancouver as he has tallied points in all three games(five total) on his new team. Even more good news as the shot volume has seen a huge uptick since the end of December as he is averaging just shy of four shots per game over his last 22 with 4+ in each of his first three with the Canucks. Combine all that with a price right around the $6k mark on both sites and a terrific matchup vs. the Sens and you have an elite PTS/$ play in all formats.

This game is one of three where both teams rank outside the Top 20 in defense so let's go right back there with another top PTS/$ play. While they have struggled defensively, the Wild's offense has kept them in the playoff race and the core of that offense has been Kevin Fiala. He has not only provided huge upside for fantasy with 12 points in his last 10 games but also given us a sky-high floor with 43 shots on goal while skating over 17 minutes per game on the top line and powerplay unit. At these prices, he is in play in all formats.

I am very high on the Cancuks tonight in a plus matchup against the Senators and that doesn't change on defense. While Quinn Hughes has been extremely exciting to watch and has made an awesome GPP play, it's Alexander Edler who I want in my cash games tonight. He not only provides a very high floor with shots and blocks(combined 44 last 10 games) but he also comes in hot with points in three straight. He is in play in all formats on both sites, but his best value is easily on FanDuel in the mid $4K range.

The addition of Justin Faulk has not worked out the way the Blues had hoped as he is on pace for his worst offensive output since the 2012-13 season. While that doesn't exactly sound like a ringing endorsement, we have finally seen the price drop dramatically which does give some appeal, at least for cash games. He has tallied three or more combined shots/blocks in seven of his last nine games and has six or more in back to back games coming into tonight. He gets around 20 minutes of ice-time a night and still gets some opportunity on the powerplay but it's cash only for me tonight.

Also Consider: Shea Weber/Ben Chiarot(MON) or Roman Josi(NSH) if you want to pay right up at defense