Whether or not you made bank with betting or DFS last week, we were witness to one of the best finishes to a tournament in a long time. Dustin Johnson, looking for back to back wins, made an incredible putt on the 72nd hole to force a playoff then Rahm one-upped him with a 66-foot bomb on the same 18th hole in the playoff. It was a crazy four-day test for the Top 70 in the standings and DJ and Rahm were two of just five players to shoot under par for the event. If you missed out on viewing, here is a quick final round highlight package you NEED to watch.

The Top 30 in the FedEx Cup standings now head to East Lake Golf Club for the Tour Championship. For the second straight year, a new format will be used and you need to understand it before constructing any lineups. Essentially, the Tour wanted to get rid of the two leaderboards for the final event and complex formulas needed to track who has a chance and also limit the event to one winner. Dustin Johnson who earned the #1 seed will start the tournament with a score of -10 while Jon Rahm who is 2nd will start at -8. Again, to see what score all players will start at, check out the format and FedEx Cup Playoff info page.

What this type of setup gives us is a much different salary structure on both sites. The players starting outside the Top 20 will come very cheap as they have a lot more strokes to make up to get to the top of the leaderboard. My strategy will be the same as last year when I faded the top guy as he pretty much needs to dominate and stay in 1st place to pay off that huge cost. It worked out last year as Rory was the only player topping $10K in the optimal lineup even with JT(most expensive) finishing 3rd.

The course is a Donald Ross-designed par 70 listed at 7,346 yards on the scorecard. The fairways are narrow and tough to hit and it has shown as the field has averaged just 55% driving accuracy over the last five years. The rough isn't nearly as penal as it was last week but the difference in Greens in Regulation from the fairway vs. the rough is about 20-30% so hitting the fairways is definitely where players can separate themselves. Last year, Rory hit 64% of fairways which was 12% more than Xander in 2nd and 10% more than the field average for the week. This is also where Chez Reavie popped off leading the field in driving accuracy(76%) and jumping from T21 at the start of the week to finish T8 and a part of that optimal lineup.

Strokes Gained: Off the Tee with emphasis on accuracy is right near the top of my model this week. Right up there with accuracy off the tee is Strokes Gained: Approach with emphasis on Proximity which will ultimately give players much better opportunities to score and rack up fantasy points. The course is also a Par 70 meaning 12 Par 4's and only two par 5's so scoring on the Par 4's will be very important. Most of all, for these stats I am looking at not only a long term performance but also performance since the return of golf(stats for short term via Fantasy National Golf Club).

With all that said, let's jump into the picks after looking at some course info and trends. If you want a look at all my core plays for this week, make sure to grab a copy of my cheatsheet in chat or on the Chris's Sheets page. 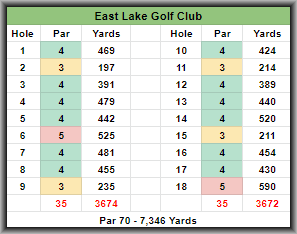 The decision at the top is fairly easy for me this week as Rahm is a whopping $2,500 cheaper than DJ on DraftKings($1,900 cheaper on FD) while sitting just two strokes back and four rounds to make it up. That isn't the only reason, however, as he is playing some of the best golf of his career with two wins since the return, both very tough tests that demanded an all-around game. Looking at the stats since the return, Rahm ranks 2nd tee to green, 6th in fairways gained, 10th in proximity, 2nd around the green, and 9th in birdie or better. I look for him to make it back to back wins making him the FedEx Cup champ.

Xander is in a very similar situation as last year starting seven shots back of the lead(6 back to start 2019 Tour Champ) and this puts his price right in that mid-range under $9K on DraftKings and in the mid $9K range on FanDuel. That is excellent value for a player who has excelled here at East Lake with a T2 last year, T7 in 2018 and won the Tour Championship in 2017. Since the return, he ranks(in this field) 5th tee to green(4th OTT, 20th APP, 8th ARG) and has also had a clutch putter ranking 9th gaining a half stroke per round. All things considered, X is my top PTS/$ play in the field and safe in all formats.

While Billy Ho may not be on the same level overall as Schauffle, both have been tremendous at East Lake Golf Club. Horschel has only made three Tour Championship in his career but has finished T2 in 2018, T7 in 2013, and won the event in 2014. He just snuck into this year season finale as the #30 seed and is 10 strokes back of DJ but also comes very very cheap on both sites and is a player I can see gaining ground over four days and even a Top 20 helps him crush value. He is my top value play this week.