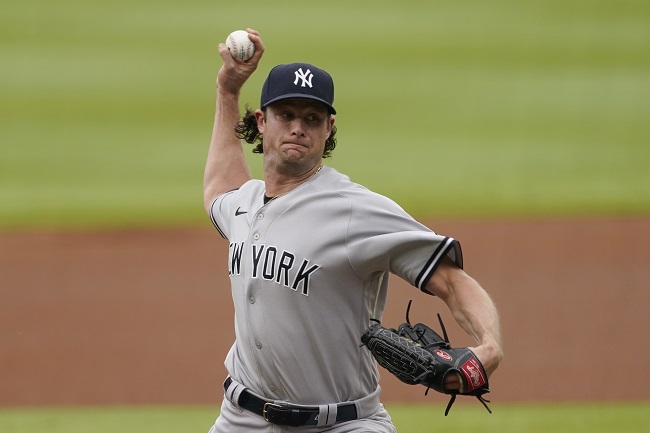 Sitting atop the projections on the early slate is Dylan Bundy who may seem expensive on DraftKings but is actually at his lowest price in four starts. He and the Angels are in a favorable spot today as -180 favorites against the Rangers who rank dead last in runs scored and wRC+(64) and have been slightly worse against righties. For Bundy, it has been a terrific start to the season with his new team as he enters with a 2.49 ERA, 3.79 xFIP, and has struck out 27% of the batters he has faced. He is the top pitcher in all formats on the early slate.

I am not going to lie. I am a little worried about all the home runs Cole has been giving up this season but there is also a lot to like and it starts with the price on DraftKings at remains in the low $10K range. Even when he is giving up home runs, he is still hitting his floor and comes with a ton of upside thanks to his elite swing and miss stuff(33% K rate, 15% Swinging Strike Rate). After two terrible starts in a row, he bounced back his last time out against these Orioles and I think he puts together back to back solid starts and easily hits his cash value tonight and has a ton of GPP upside at this DK price.

Also Consider: Chris Paddack(SDP) at his price is high in our PTS/$ rankings but which Paddack do we get? Josh Fleming(TAM) is an intriguing punt option for SP2 on DK as he has started his career with three straight wins posting a 3.52 ERA and backing it up with a 3.91 xFIP.

I am going to double down with Gurriel as I wrote him up last night. He hasn't been as consistent as years past but is still crushing left-handed pitching(.438 wOBA, 184 wRC+) and hitting near the middle of the Astros offense. The matchup may not be completely ideal but the price is in a great spot for a small slate putting Gurriel in the conversation as a top PTS/$ in all formats.

On the main slate, it's another PTS/$ play that stands out as Rhys Hoskins comes in red-hot and has been crushing these prices consistently. Over the past three weeks, he has tallied a .454 wOBA and 186 wRC+ with nine home runs and 17 RBI. He and the Phillies are now slight favorites against the Marlins and Sandy Alcantara who has been a roller coaster ride to start the year with a bit of a walk(10%) and home run(20% HR/FB) problem. At these prices, Hoskins is in play in all formats.

There is not a whole lot going on at second base today on the early slate so I am going back to La Stella who is hitting leadoff for the A's. Like I have mentioned in the past, he is not an upside guy but provides a solid floor with a .377 wOBA and 142 wRC+ against right-handed pitching. The A's are projected for over five runs on the early slate and my top play at the position in all formats.

We have a few more options at the position on the main slate but anytime the Rays face a lefty it grabs my attention. He has been very consistent overall with a .417 wOBA and 167 wRC+ and a lot of that comes from his performance against southpaws where he enters with an insane .432 ISO(isolated power). He is in play on both sites with his best value easily coming on FanDuel where he remains in the mid $2K range.

This play is all about price meeting opportunity creating an excellent PTS/$ situation. Simmons is not a sexy play at all but ha been placed into the leadoff role for the Angels and since the move has hits in six of eight games including five multi-hit efforts and best of all a .355 on-base percentage. That is all he needs to do with elite hitters like Trout and Rendon behind him. At these prices, he is my top shortstop on the early slate and safe in all formats provided he sticks in that leadoff spot.

I am going to double down on Rays in the middle infield tonight as the value against lefties is to hard to pass up considering the salary relief allowing us to pay up elsewhere. Looking at the stats, Adames and Brosseau has been practically the same player.

Like Brosseau, Adames has been extremely consistent overall(.385 wOBA, 148 wRC+) and has also been elite vs. left-handed pitching(.411 wOBA, 166 wRC+). They are my top PTS/$ two-man stack in cash games tonight.

Rendon continues to be one of the most underrated players in the game and after helping Washington to a World Series, is now a part of the Angels and hitting behind the one-and-only Mike Trout. He has delivered as expected early in the season and while the average sits slightly below .300, he comes in with an elite .412 wOBA and 166 wRC+ and has 20+ runs and RBI. He is the most expensive player at the position on FanDuel for the early slate but somehow only the fourth most expensive on DraftKings. Get him in your early lineups today.

This play at third on the main slate has more to do with the position overall than Anderson. If you have the salary, you are most definitely spending up on Manny Machado who is a multi-hit machine seemingly day in and day out. After him, things get blurry so we might as well just punt the position and spend up elsewhere. For Anderson, he has called off a bit since his red-hot start but does have five hits in his last two games and at least one hit in seven of his last nine. At these prices, I will have exposure in all formats.

On the smaller, early slate I will be concentrating mostly on FanDuel and the Braves are easily the top team to target. They are in a smash spot against Austin Voth who has given up five or more earned runs in four straight starts and a whopping five home runs over his last two.

Acuna comes with a premium price tag but is one of the best leadoff hitters in baseball with a .422 wOBA(.428 xwOBA) and also comes with huge power upside with nine home runs, an average 90.7 mph exit velo and .618 xwOBA on the season. If you are looking for some salary relief, Adam Duvall comes in under $3K and has been red-hot lately with hits in 10 of his last 12 games with three doubles and seven home runs. Lock and load in all formats.

Paying up at pitching or for a few elite bats is going to be quite easy tonight as there are a ton of mid-tier and lower value tonight. I will turn to the Dodgers for more of that value as A.J. Pollock has been scorching hot with hits in six straight(11 for 25 with 2 HR and six runs scored) and now faces a struggling Madison Bumgarner who has given up 15 earned runs over his last three starts including eight home runs. Fire up Pollock in all formats.