The PGA Tour fall season continues this week with a  trip to Shadow Creek Golf Course in Las Vegas for the CJ Cup. You may recognize the name as this event has been played in each of the last three seasons but in JeJu Island, South Korea. With travel restrictions due to COVID-19, the event had to be moved and was an easy transition with the Tour in Las Vegas last week, as well.

One thing that is the same this time around is the loaded field as seven of the Top 10 and 39 of the Top 50 players in the Official World Golf Rankings will be teeing it up in Vegas.

When it comes to the course and figuring out what stats are key, it is a bit of a guessing game this week as Shadow Creek has only been used once before for an event and it was the Tiger vs. Phil match. Looking at things strictly from pictures on PGA Tour site as well as the flyover with ProVisualizer, the course has narrow tree-lined fairways and presents a ton of risk-reward shots with bunkering(74 total) and water hazards(in play on 9 holes) mostly in the form of long creeks.

It does not appear to be a course the bombers can just let it rip without worry and should lead to more strategy and ball placement off the tee to have a shot at hitting the smaller-than-average Bentgrass green complexes. In my opinion, this brings more players into play which adds to the stars and scrubs strategy I was already considering at this no-cut event.

Most of all, with no course history I will be looking at players who are trending in terms of form and concentrating mostly on Ball Striking and Birdie or Better %. With all that, let's get into the picks. 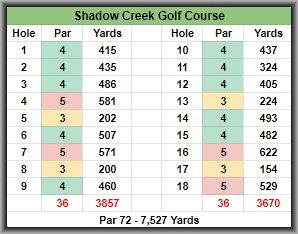 With an elite field like this, we are splitting hairs with the guys at the top so I will default to my model which has DJ at #1 this week. Despite missing two cuts, he leads all golfers with three wins(Tour Champ, Northern Trust, Travelers) since the return of golf and has two other runner-ups and six total Top 10 finishes in 10 events. While JT is the top name when breaking down no-cut events(new tab on sheet), DJ is right there with three wins, 10 Top 10's, and is third in average DK scoring(91.6) in 17 events going back to the start of the 2017-18 season. All things considered, he is my favorite DFS play this week in all formats.

With a smaller field and no cut, finding lower-owned leverage plays can be more difficult but this week I am all over Morikawa.  The low ownership should be driven by the fact Johnson, Thomas, Schauffele, and Wolff will likely all be over(or close to) 20% owned in the top tier combined with the fact he has missed back-to-back cuts for the first time in his career and was 24% owned last week. Despite being only 23 years old, he is already an elite player and ranked #6 in the OWGR so the fact we may get him in the 10% ownership range has me licking my chops in DFS this week. I will also be betting him outright, Top 10, and Top 20 this week.

Coming out of the COVID break, Louis was decent making four of five cuts but had no finish better than T46 in that time, largely in part to losing strokes on approach in four of those five events(-8 strokes combined). Then it was like a switch was flipped at the WGC Mexico where he gained 4.9 strokes ball striking and finished T6. He comes into this week having gained strokes on approach in seven straight including a whopping seven strokes over his last two events alone. On top of that, he is running a hot putter and is sitting nicely in the mid $8K range and is one of my top PTS/$ plays this week.

I am much more inclined to write up these risky leverage plays in a no-cut event and that brings us to Matthew Fitzpatrick. He has been very boom or bust lately missing three of his last four cuts with a T6 at the BMW Championship(no cut event) sandwiched in between. Speaking of no-cut events, he has T6 finishes in two straight and Top10's in three of his last four. Statistically, he is 25th in proximity, 16th in par 4 scoring, 25th in birdie or better, and 13th in DK scoring over the last 24 rounds. The price is high, he is always risky, but with that he has upside at a projected low ownership and will most definitely be a part of my GPP core this week.

Since missing the cut in the first two events back after the break, Si Woo has been terrific making 11 of 12 cuts with five Top 25's and two Top 10's, one of which came last week at the Shriners. Despite losing strokes on approach in three of his last four events, he still ranks 23rd in SG: App, 4th in Opp Gained, and 2nd in BoB % over the last 24 rounds. The other thing I like here is that if he struggles with his irons on these smaller than average greens he is near-elite around the green. At these prices, I will have exposure in all formats.

I talked about a heavy stars an scrubs strategy with it being a no-cut event and value plays like Si Woo Kim and Sebastian Munoz are exactly why it will work. Like Kim, Munoz comes into this week on a bit of a roll in terms of form having made seven straight cuts including Top 10 finishes at the Tour Championship and BMW Championship which were also the last two no-cut events. In this field, he ranks 13th in Par 4 scoring, 16th in opportunities gained, and 24th in birdie or better over the last 24 rounds. That is more than enough for e to go heavy on Munoz as one of my top value plays to tie my lineups together this week in Vegas.