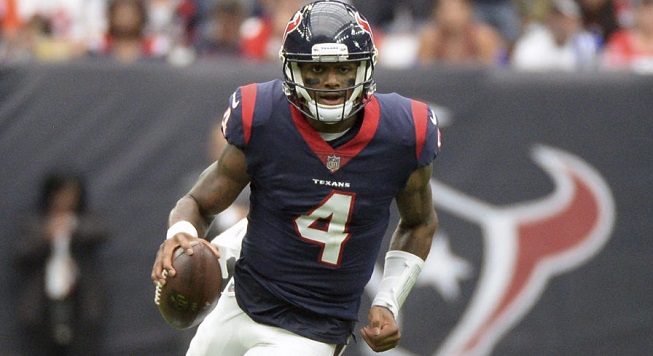 Watson is right back to being the fantasy-QB1 type we were used to last season. Since Bill O’Brien was fired after Week 4, Watson has been the fourth-highest fantasy scoring quarterback behind only Kyler Murray, Justin Herbert, and Patrick Mahomes. That’s rarified air, and he’s coming off his best week yet with 344 yards and two touchdowns through the air and another 36 yards and a touch on the ground against the Patriots. The Lions are the 25th-ranked defense on the season allowing opponents to do damage on both the ground and through the air. Watson is far and away the cash game quarterback on this slate and I suspect he’s chalk on both sites.

Since taking over for Kyle Allen 2.5 weeks ago Smith has returned to his previous efficient self, completing 71% of his passes. The touchdowns haven’t exactly followed with only two over the last three weeks as compared to four interceptions. But those picks are a little lumpy with three of them coming in the game against the Giants when he came in for Allen. The yards aren’t going to accumulate in big ways because he’s still reliant on under throws and doesn’t stretch the field all that much. But he’s facing the 20th-ranked defense this week and a team in the Cowboys who rank 21st in opponent plays per game. This is a pace-up matchup for the Redskins and Smith isn’t cost prohibitive.

Also consider Lamar Jackson whose price has continued to drop this season. With the running backs banged up and Baltimore in a precarious playoff position, it stands to reason we see Jackson get out in the run game more this week. The problem is the matchup against the Steelers who own the best defense in football through 11 weeks.

The Cowboys actually looked like a functional offense on Sunday, stealing a somewhat surprising win over the Vikings. Will it carry over? They face a Washington defense that’s been surprisingly good this season, ranking 7th in DVOA though is significantly better against the pass (5th) than the run (14th). Zeke carried the ball 21 times for 103 yards against Minnesota and added a couple of more targets through the air. In terms of big money, it’s pretty easy to fit salaries on both sites for this smaller slate and it sure seems like Zeke’s floor is high enough to support the pricing on FanDuel and DraftKings. It’s not a perfect situation, but that Andy Dalton was able to make things look competent in Week 11 is at least moderately comforting.

The good news is that Duke is the bell-cow back for the Texans now that David Johnson is out. He played 77% of the snaps in Week 11 against the Patriots and 95% of the snaps in Week 10 as well. So that’s the good part, he’s on the field a ton. But the production, at least on the ground has left a lot to be desired. Over the last three weeks, he’s averaging 13 carries per game, but only 2.75 yards per carry. That’s total garbage. He gets a good matchup here against the Lions who rank 27th against the rush, but you have to live with the inefficiency. Thankfully, Watson does look his way in the passing game and he has 10 targets in the last three games. The usage at these prices is enough to play in cash, but you have to live with the lack of overall yards.

It’s tough jamming running backs into this Steelers’ defense, but the Ravens are so thin at the position that Edwards is likely to play a ton here. Both JK Dobbins and Mark Ingram tested positive for COVID and are going to sit out Thursday evening. That should leave Edwards with the lion’s share of the carries. When he faces Pittsburgh in Week 6, Edwards got 18 carries and racked up 87 yards (5.4 YPC) even scoring a touchdown in the loss. The targets aren’t really going to be there in this offense, but I’m expecting the volume to make up for the price.

Brandin Cooks remains underpriced on both sites and should be a staple for cash games on this three-game slate. In the five previous weeks before Week 11, he has averaged more than nine targets per game from Watson and six or more catches in four of those. Week 11 saw *only* five targets but he still tallied 85 yards and had a touchdown catch called back. He’s still the primary target in the Houston WR corps with 73 on the season. The price has trailed some of the performance because the TDs haven’t been there consistently. But that still makes him a high floor play.

Meanwhile, Fuller is five targets behind Cooks on the season but leads the team in receiving yards (708) and receiving touchdowns (6). Stacking both of these receivers with Deshaun Watson and possibly Duke Johnson is probably the way to go in cash games on this Thanksgiving Day slate. With the highest implied total, we might be seeing a lot of points early before even sitting down for dinner.

Moving from Kyle Allen to Alex Smith hasn’t caused any issues in McLaurin’s performance or usage. Over the last three weeks, he’s been targeted an average of eight times and posted an average line of six catches and 98 yards. In fact, on the season McLaurin ranks third overall in yards with 871 behind only DeAndre Hopkins and Stefon Diggs. He’s an elite WR1with a new quarterback who is still throwing his way. I suspect, after a quasi-chalk showing in Week 11, will be one of the highest-owned WRs on this slate. It will be for good reason.

I hate the matchup but we also probably need to still consider Diontae Johnson here who has definitively emerged as the primary target guy from Big Ben in the Steelers’ offense. He’s had 10 or more targets in four of the last five weeks and is coming off back-to-back games of more than 100 yards receiving.

Over the last five weeks, Ebron is the fourth-most targeted tight end in football with 32 as the Steelers continue to lean heavily on the pass. In that stretch, he has 194 yards and is tied for first at the position with three touchdowns. This week isn’t going to require a lot of savings across the board because the pricing is pretty soft so rolling out Ebron here should work out.

Akins has seen three or more targets in five of his seven games which doesn’t sound like all that much until you remember that this is the tight end we are talking about. He’s coming off his best game of the season against the Patriots with five catches for 83 yards. He’s coming so cheap on DraftKings and you basically need to punt the position anyway so I don’t mind going in this direction. Again, tight end remains a stain on the fantasy football industry and this small slate is no different. But at least Akins has pass-catching ability.

The Texans aren’t a good defense, but the Lions aren’t a good offense either. The Lions have allowed 27 sacks on the season which is the seventh-most in the NFL though they have limited the opponents' takeaways. Houston’s 21 sacks rank them around the middle of the pack. They are just coming so cheap this week against the worst offense on the slate. And that is worth something.

If the Ravens are limited by COVID concerns in this game then the Steelers could really exploit Lamar Jackson and company if running a skeleton offense. Pittsburgh leads the league in sacks (38) and Baltimore has actually given the ball away a decent amount this season. Steelers are expensive but there’s no denying they are the best D on the slate price independent.