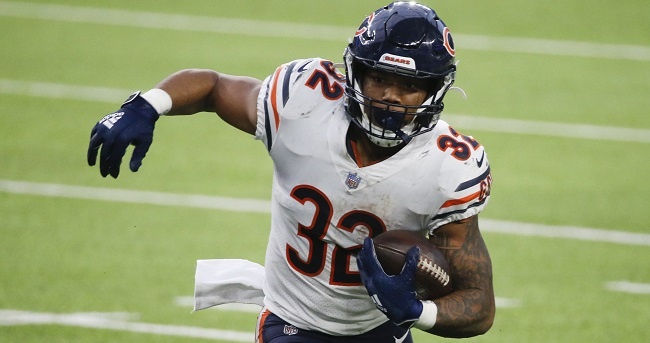 From a fantasy perspective, Jalen Hurts has had about as good a two-game stretch as any quarterback in their first two games under center. In the first one he got out into the open field against the Saints and put up 106 yards on the ground. Then, in Week 15 against the Cardinals, he really turned things on with an absolute slate-breaker. He threw for 338 yards and three touchdowns while also adding 63 yards and touchdown on the ground. His 40.8 DraftKings points were the 7th-best quarterback game on the season. Now he’ll face a Dallas defense ranked 25th in DVOA this season. Hurts’s price has come up considerably, but it’s only in line with the awesome performance. He’s still a high floor play in this tier.

Since Week 11, Deshaun Watson is your QB2 in terms of average DraftKings scoring and he’s really only a few decimal points behind Josh Allen. The dude has just been elite, throwing for more than 300 yards in four of his last five games while averaging more than 30 yards on the ground. He’ll get a choice matchup against the Bengals who rank 29th in DVOA on defense this season and are much worse against the run than the pass. Don’t let the win over the Steelers fool you either, this is still very much a bad team. It’s close between Watson and Hurts for me in this upper tier. Watson does feel a bit safer because of the historical track record, but you do have to pay just a bit more.

If you’re looking for a cost-saving measure on DraftKings old Mitch might be the way to go. Since taking back over for Nick Foles four weeks ago Trubisky has been fantasy serviceable. He’s been around middle of the pack on a DraftKings points per game basis, putting up 18.9/game in that stretch. The good news is the efficiency has really been there, especially over the last three weeks completing 74% of his passes with a 5:1 TD:Int rate. And this week he gets the league’s second-worst pass defense in the Jaguars. At sub-$6K on DK I think you can take a stab here in cash games.

So this is the time where I have to say I was wrong about the ceiling on David Montgomery's usage. Montgomery had a staggering 34 opportunities last week, and turned them into 162 total yards and two touchdowns. The fact that this is even possible makes him probably 10% under-priced even from these season-high prices, and the fact that he's now walking into his best match-up of the season makes him a must-play. The Jags have reclaimed the throne as the owners of the worst defensive DVOA in football, and the Bears are 7.5 point favorites here. Montgomery is a free square in cash games.

With Zeke currently being described as "having a chance to play," we'd be remiss to not point to Pollard as a very easy play if Elliott were in fact to miss this one. Pollard was a mandatory play if you wanted to make the money in cash games last week, rolling off 28.2 FanDuel points as a 66% start at near-minimum salaries. The price has come up slightly this week, but it's arguably a much better spot against the suddenly frisky Eagles. Vegas likes the Eagles by 1.5 points here, but given Pollard's usage in the passing game (9 very effective targets last week) I think he should be involved plenty. Keep an eye on Zeke, of course, but if he sits again we'll happily play Pollard in any format.

Le'Veon Bell in cash games? Is this 2017? No, dear friends. It's week 16 of the year 2020. Clyde Edwards-Helaire has all but been ruled out for the remainder of the season, leaving Bell as the lead ball-carrier going forward. Bell had 15 carries and a target last week when CEH had 14 and 3, so this is a lot of opportunity opening up for him. Darnell Williams may spell him on some passing downs, but Bell is no stranger to catching balls out of the backfield in his own right. The Chiefs are 11.5 point favorites here, pointing to a favorable game script if you're looking for carries aplenty. It's not without risk, but I'm happy to play Bell in any format this week.

Other situations to watch:

Do you believe in David Johnson's incredible target-share last week? If so, he's a fine cash game play this week if Duke Johnson sits again.

JD McKissic somehow increased his target-share under Haskins, and while that wasn't how things were playing out before Smith was injured, he's at an interesting price point if you think that continues.

We have a couple of other injury spots to watch as well. Benny Snell Jr. is nearly the minimum and touched the ball 20 times on Monday Night Football (including a touchdown). James Robinson left last week's game against Baltimore, and his status is in doubt. Akers has been ruled out, and if you can guess where those carries are going it could be pretty profitable. McCaffrey is questionable once again. All in all there rates to be decent value this week, even if it's tough to forecast exactly where it will be at this point.

This play is mostly contingent on Julio Jones sitting another week for the Falcons. And while’s the star wide receiver has indicated he doesn’t want to be shut down for the season, that’s looking increasingly likely considering Atlanta has nothing to play for and Jones has been banged up all season. But even in his own right, Ridley might be a great play regardless. He’s currently WR3 on the season, averaging more than 21 points per game and is coming off three-straight double-digit target weeks. Over his last three he’s averaging a whopping 7.6 catches and 132 yards per game. That’s remarkable and the Falcons will likely be playing catchup this whole game.

Sure, the Jets pulled off an improbable win over the LA Rams in Week 15, but this team still stinks. And we are expecting them to return to the defensive dumpster again this time around. It’s worth noting also that the Jets’ defensive woes come more in the form of not being able to stop the pass. They rank last on the season in that metric. On the season, they are allowing the third-most yards per pass attempt. Meanwhile, Landry has become the target share WR in the Browns offense and over the last three weeks is averaging close to 10 looks per game. The yards aren’t in abundance but he’s a totally reasonable price, especially on FanDuel.

Cooks finally got back on the field in Week 15 after sitting a couple of weeks for a variety of injuries. The targets *mostly* rounded back into shape getting seven looks and finishing with 59 receiving yards. It wasn’t an overwhelming performance by any means, but I do think David Johnson’s 11 targets, while encouraging, were something of an outlier. On the season, Cooks is averaging more than seven targets per game with an eight target median. It’s such a good matchup against the Bengals and cooks is still coming as a solid mid-tier play.

Meanwhile, Coutee was disappointing in Week 14 with Cooks out, but bounced back last time out with seven target and a final 5/53/1 line He’s coming cheap on FanDuel and in the middle-tier on DraftKings. Again, I think DJ’s passing game opportunities really can’t sustain double-digit targets and we should see something of a redistribution back to the WRs in Houston.

Other situations to watch:

I think Terry McLaurin is close to a cash play, but I’m a bit concerned Dwayne Haskins is facing some possible discipline this week. The latter was spotted out and about and could be facing punishment for breaking the league’s social distancing protocols. We will have to monitor that situation.

If Keenan Allen and Mike Williams remain banged up for the Chargers, I don’t mind trotting out Jalen Guyton or Tyron Johnson who are both coming cheap on DraftKings. But it would be better if the former two were ruled out rather than just limited.

We wrote up Thomas last week, pointing out that the one potential issue could be Dwayne Haskins coming under center for the Football Team. Well, it proved to be a tremendous benefit! Haskins targeted Thomas 15 times, which Thomas converted into 13 catches for 101 yards. It looks as though Thomas' role is somewhat independent of the quarterback, so Alex Smith potentially returning shouldn't hurt him too much. If you need a cheaper tight end this week, Thomas seems to be a cut above the rest.

How much is too much for Travis Kelce? Well, we're starting to get there if our lineup optimizer is to be believed. We played Kelce last week, but with the emergence of Thomas and some other cheaper options we might not run him out there this week. Kelce was more than serviceable in a very tough match-up with the Saints last week, as he extended his streak of 8 catches or more to 7 weeks. That's just staggering for a tight end. He scored a touchdown as well. The issue here isn't Kelce - it's the price. At these figures we're starting to need to compare him to the very best in DFS, and while you can make a case for him as one of those players on DraftKings with the PPR, it's tougher on FanDuel. Still, he's so good, and most of the position is so bad, that you can't rule him out entirely.

Dallas Goedert, who drew 8 targets from Hurts last week. As fun as a Hurts to Ertz sounds (and it really does roll off the tongue), Goedert is emerging as the highest overall target guy in Philly.

As exciting as Jalen Hurts is, he's also pretty exciting if you have the opposing defense. He took 6 sacks last week, and turned in his second straight week of 57% completion percentage or lower. That hasn't manifested into many interceptions just yet, but believe me, they're coming. The Cowboys are cheap, and do have some big-play ability. I really like this spot as a way to spend down at a volatile position.

A few other targets:

You can consider the Chargers as a high floor option against a bad Denver offense. The Browns have to be there as they try to end the Jets' winning streak.