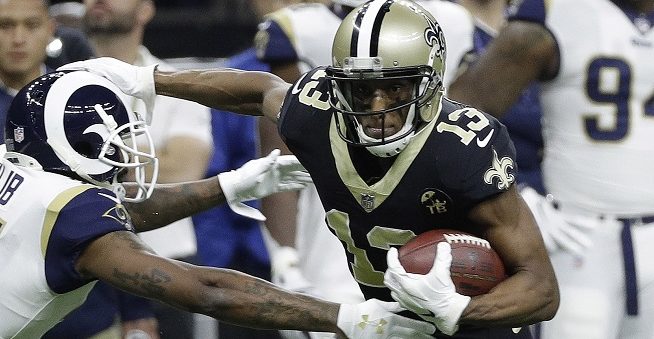 The NFL managed to make it through all 256 games of the regular season, and now we get to sit and pray that Covid doesn't ruin the playoffs. With the Saints apparently narrowly avoiding losing their running backs to the plague, it looks like we might get a normal week of football after all. Let's go game by game and see where we can find a little DFS value.

Things kick off on Sunday with a rematch of one of the best games of the regular season, a game that saw the Titans win on a 29-yard touchdown run from Derrick Henry in overtime. Blessedly, this was a week where both teams were mostly healthy, and there's a lot we can learn from how each team game-planned against the other. Let's take a look at the DFS relevant plays on both sides.

One thing that was clear when these two teams met in November was that the Titans were prepared to live and die with Derrick Henry. In spite of falling behind by 11 points in the second quarter, Henry touched the ball 30 times for 132 yards. Baltimore was tough against the run this season, but the playoffs are a time where we are going to have to recalibrate our expectations about match-ups. We're looking at short slates with good teams, and you just aren't going to get to run Henry against teams like the Texans. Now price might wind up making Henry miss the cut, but don't fret this spot based on match-up or opportunity.

Ryan Tannehill FD 8200 DK 6600
Opponent BAL
Proj Points FD - 18.77 DK - 19.45
Our system recommends Lamar Jackson as the top overall cash game play on both sites, but Tannehill is the next man up. While Jackson is obviously the superior DFS QB, Tannehill brings an interesting skill set to the table in his own right. The Titans have been using Tannehill's rushing ability in the red zone far more often toward the end of the season, with RT going for 5 rushing touchdowns in the Titans' last three games. Tannehill is unlikely to roll up huge passing yardage but is unlikely to kill you, either, with 55 touchdowns against just 13 interceptions over the last two seasons. Baltimore is also worse against the pass than against the run, so if things look hard for Henry early Tannehill might get a chance to cook. It's more of a big tournament play for me, but it's not one you should overlook.

Right now our system actually sees Corey Davis as a potential cash game play. He had 11 targets last week, and tied AJ Brown for the team lead with 7 targets when these teams met the last time around. The way pricing has shaken out this week means we can't likely play Brown in cash games at peak prices, but we might need another cheap receiver to run out there in Davis. Brown remains a great big tournament play, though.

A beyond obvious cash game play. Jackson was 40% owned in cash games on FanDuel last week in a slate that featured every single player in football, and this week he'll draw one of the worst defenses the NFL, and by far the worst defense in the playoffs. Any concern that the Ravens were going to dial back Jackson's carries this year has long-since evaporated, with Jackson being on lock for double-digit carries since week 7. He's basically turned back into the MVP from last season, and we'll happily roll him in any format here.

Mark Andrews FD 7000 DK 5200
Opponent TEN
Proj Points FD - 12.81 DK - 15.51
I've taken every measure to avoid playing Andrews in cash games this year simply because Lamar doesn't need to pass to be effective. Andrews has been good for 7-10 targets when the Ravens need him, but Lamar has also thrown 18 or fewer passes in 3 of his last 5 games. Still, tight end is grim today, my friends, and you might to bite the bullet on a slightly overpriced Andrews if you want something resembling safety at this position.

The running backs: Can we really consider playing a running back who doesn't even get 40% of his team's carries? We might be faced with that situation this week. Last week we saw Dobbins, Edwards, and Ingram get 13, 12, and 9 carries respectively. It's tough to know how those would have been distributed in something other than a blow-out, but this is the data we are working with. I honestly don't think it's crazy to roll Dobbins with the idea that he's been so damned good on a per-touch basis, but it feels awfully risky for cash games.

Conspiracy theories are boiling over about whether the league purposefully gave the Saints a Sunday game to give them time for Kamara to clear the Covid protocol, but regardless of what may have gone on behind the scenes, we've got to deal in reality. We won't know for sure if Kamara is going to play until game day, but based on the buzz coming out of New Orleans, we'll assume he'll be out there.

These two teams met in week 8, and played a nail-biter than the Saints won in overtime. That might as well have been years ago, though. The Bears had Foles under center, and Michael Thomas was unavailable for the Saints. Let's take a look at how these teams look in our system heading into Sunday.

The Bears are a pretty tricky team to break down at this point. David Montgomery has finished the season with a bang, but is he really worth a $8,400 price tag on FanDuel against the league's second best defense?

And then there's the wide receiver situation. Darnell Mooney saw 13 targets against the Packers, but had to leave the game with an ankle injury. As of this writing his status is unknown, and if he sits, Allen Robinson would be a fantastic play. If he plays, his cheap price tag is awfully tempting.

Cole Kmet FD 5300 DK 3000
Opponent NO
Proj Points FD - 8.48 DK - 10.68
Believe it or not, the Bear showing up most often in our early cash game lineups is Cole Kmet. Tight end is really tough this week, and outside of an overpriced Mark Andrews you're really looking at guys who are getting 5 targets or fewer per game. But what about Cole Kmet? Looking at his season-long averages isn't exactly expiring, but he seems like he has gained Trubisky's trust as the season as worn on. He's gotten 6+ targets in four of the last five games of the season and has wrested the TE1 targets from the aged Jimmy Graham. At near minimum prices on both sites, Kmet helps you afford expensive pieces elsewhere.

There is still a number of outstanding questions for the Saints that we might not have answers to as quickly as we'd like. It's assumed that Alvin Kamara will be cleared for Sunday, for instance, but since we won't know for sure until he comes off the official Covid protocol we can't definitively recommend him. And at $9,000, it's not clear that we'd want to play him anyway.

Thomas got back to practice in a limited fashion Wednesday, and regardless of his status for Sunday he's a big lynchpin of the week. If he winds up sitting, you can lock and load Emmanuel Sanders, who drew 13 of Drew Brees' 32 passing attempts in week 17. If he plays, he's something like $1,500 too cheap on both sites. Thomas was as efficient as ever in his limited playing time this season, and Brees will certainly look for him in shorter routes against a stout Chicago defense.

This is the weirdest game to analyze, for me, in spite of the teams having met two times this season. The first time they clashed, the Steelers rolled the Browns by a score of 38-7. The second time they met, the Browns eked past the Steelers' back-ups to beat them by 2 points in week 17. So we don't exactly have a lot to go on from these two meetings, other than the fact that we should potentially be prepared for a weird game. That being said, we know how these teams behave in competitive games, so we can at least draw from that. Let's have a look.

Well, it's a team with the fewest DFS relevant options against the league's top-ranked defense by DVOA, so we are going to have slim pickings here. Particularly since the running back situation is a time share. If I had to play a guy from the Browns, it'd be...

Sure? While Landry has seemingly shaved a target every game for the last 6 weeks, he's still seeing plenty of action for these price points. And in a game where the Browns are nearly one touchdown underdogs, he could see even more targets. The Browns had a tough time scoring against the Steelers' back-ups this week, and they should be more motivated to open it up here. Landry represents a fairly cheap way to lock in reasonable target share, and he's got a nose for the end zone as well.

Diontae Johnson is like 90% of a WR1 at this point, right? If you throw out week 17 when the Steelers decided to throw in the towel, Johnson averaged 12 targets in the 8 weeks prior. That's quite a pace! Yes, the Steelers have had difficulty moving the ball through the air recently, but you can't blame Johsnon. I'm a big time buyer on the Steelers' de facto possession receiver in a game where they'll likely seek to control the clock and grind the Browns down.

As for the Steelers' running game, we might just have to press James Conner into service. It's nearly impossible to play all three of Henry, Montgomery, and Kamara, and Conner is sort of the next man up after that on the basis of his cheap price tag. While the carries haven't been fantastic, he did have some success when these two teams met earlier this season, and he also had 13 targets thrown his way over the last two games of the season. We'll trade carries for targets for DFS purposes, but it's not clear how reliable that is. Still, with so few options, I could see rolling him out there.