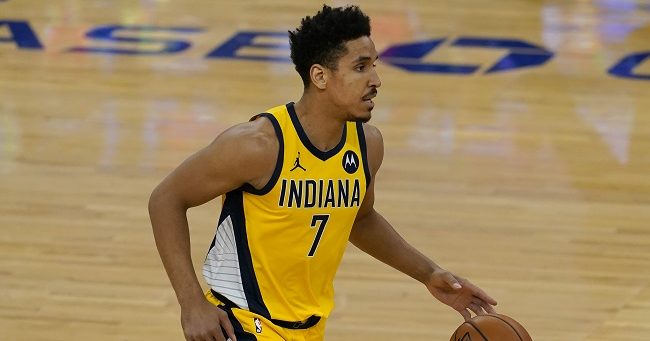 If all the COVID craziness wasn't enough, let's throw in a few teams that made a blockbuster trade. That means we have Miami and Philly missing numerous players due to COVID protocols while Indiana and Houston are shorthanded because of the monster trade they made on Wednesday. That means there's a ton of value on this slate and a lot is going to change before tip. With that in mind, keep your eye on things as closely as possible!

Brogdon is a regular in these articles and that proves that we're doing something right. So far this year, the Virginia product is averaging 22.5 points, 4.1 rebounds, 7.5 assists and 1.7 steals per game. That equates to 44 DraftKings points per game which means Brogdon is about $500 too cheap. What's equally as impressive is his floor, scoring at least 32 DK points in all 11 games this year. That floor should be even higher here, with Victor Oladipo being traded and T.J. Warren dealing with an injury. We haven't even discussed the best part of this play, with the Trail Blazers ranked 25th in total defense so far this year.

This kid is an early frontrunner for Rookie of the Year with his amazing play and he's been doing serious damage despite coming off the bench and not playing a ton. In fact, Ball is averaging 35 fantasy points per game across 25 minutes a night. That's an incredible rate and one would have to believe his minutes and usage will only creep up as the season progresses. That doesn't even take into consideration that Gordon Hayward will likely sit here after getting injured on Wednesday, giving Ball the usage increase that we've been waiting for. We're certainly not worried about him facing a Toronto team that ranks 21st in defensive efficiency either.

We also like Edmond Sumner and Aaron Holiday at their cheap price tags with Victor Oladipo and T.J. Warren out of the picture.

It's crazy that these DFS sites haven't gotten Maxey's price north of $6K yet. All of us fantasy basketball players know that he's one of the only guys left in Philly, averaging 22 shots and 37 minutes over his last three games played. It's not empty usage either, with Maxey scoring at least 32 fantasy points in all of them en route to a 42-point average. That obviously makes him a must-use player until everyone returns and he very well might have carved out a role even if Tobias Harris and Ben Simmons play here. Not to mention, Miami surrenders the eighth-most fantasy points to opposing shooting guards and will be without half of their roster.

People forget about Walker in San Antonio with youngsters like Dejounte Murray and Keldon Johnson but LWIV is no joke, averaging 24 DK points per game for the season. The reason he's a great value right now is the DeMar DeRozan absence, leading to Walker scoring at least 34 DK points in back-to-back games. That's a ridiculous floor from a player in the mid-$5,000s and it's a wonder why he remains so cheap. What makes it even more bizarre is the fact that he has a stupendous matchup here, facing a Rockets team that sits 21st in points allowed.

Tyler Herro will run the show for the Heat and is obviously in play.

How bout the line that this guy dropped on Tuesday? Danny Dimes finished with 29 points, 10 rebounds, six assists, two steals and two blocks on 9-of-21 from three-point range. That absurd stat line was obviously the best game of his career and it's becoming clear that Green's role is going to be huge as long as the Sixers deal with all of this COVID stuff. This might end up being the last time we can use him but it's hard to argue with 62 DK points. What adds to his intrigue is the matchup, with Miami owning a 30th OPRK against opposing small forwards according to DraftKings.

This might be the most egregious price tag on the slate. Miami is currently without Bam Adebayo, Jimmy Butler and Goran Dragic, forcing Achiuwa into the starting lineup. In his first start, he played the Bam role, collecting 17 points, 13 rebounds and three assists across 35 minutes. Any primary big man playing 35 minutes at this price is impossible to avoid, particularly when half the roster is missing. While that does mean he'll probably be used in every lineup, it's simply chalk you can't fade.

Eric Gordon could also benefit with Harden being traded.

With James Harden not playing here, Wood should be able to feast. We say that because that's 20 shots, 40 minutes and a 35 percent usage rate out of the lineup. What's scary about Wood is the fact that he's been doing work with Harden swallowing up all of that usage. In fact, Wood is averaging 42 DK points per game for the season, scoring at least 30 DK points in all nine games played. That makes these price tags way too low and we love that he faces a Spurs defense surrendering the sixth-most fantasy points to opposing big men.

Olynyk is in the same boat as Precious, gaining a ton of usage in the absence of Butler and Bam. Kelly was actually performing well before those guys got caught up in the COVID protocols, averaging 29 DK points per game across 30 minutes since the opener. His most recent game without those two stars was even more absurd, dropping 37 fantasy points across 45 minutes of action. Any player who's projected to play 40 minutes should not be this cheap, particularly when they're one of the focal points of the offense. We aren't concerned about him facing a shorthanded Sixers defense either.

Domantas Sabonis is a beast and should be able to exploit a lackluster Trail Blazers defense.

We discussed Danny Green's ridiculous line in Tuesday's overtime win but wait until you see this one. Joel finished that game with 45 points, 16 rebounds, four assists and five steals on 16-of-23 from the field. Most importantly, he posted a 34 percent usage rate in that game and it's clear that he's going to run the show with all of these Philly players sitting. Even if they do return, Embiid is still a monster. That's clear when you see that he's scored at least 40 fantasy points in every game this season while averaging 53 DK points per game. It's hard to overlook the fact that he had that ridiculous game against this shorthanded Miami team and he should be able to dominate again against all of these backups.

This is the definition of a GPP play but Cousins has the ability to go off anytime he plays. That's really evident when you see that he's averaging 20.8 DK points per game in just 13.3 minutes a night. That equates to an absurd 1.6 DK points per minute which is one of the best rates in the NBA. That means minutes will lead to production and it wouldn't be surprising to see him play a little more with Harden out of the picture. If he can just get 20 minutes, that'd equate to 32 fantasy points at that rate. If he does that, we're talking about 7X value.

Nikola Jokic is a triple-double machine and should be able to churn out another one against a dreadful Warriors defense.