As expected, we saw a ton of scoring at the Sony Open in Hawaii last week as Kevin Na took home the trophy with a -21 winning score. This week the PGA Tour heads back to the mainland and La Quinta, California for The American Express. For those who follow golf closely(pretty much anyone reading this), this is the event that kicks off pro-am season and is usually a three-course rotation with a 54-hole cut. With COVID restrictions, there will be no Pro-Am and there will only be two courses(PGA West Stadium & Nicklaus Tournament) used with a normal cut after two rounds. This is the point of the article where you fist pump in glory as no one really likes the Pro-Am, do they??

The field saw am early WD from Jon Rahm and while it is on the weaker side overall, does feature Patrick Cantlay, Patrick Reed, Brooks Koepka, and Matthew Wolff, all of which rank inside the Top 15 in the Official World Golf Rankings.

Before getting into the picks, let's take a look at the course's, previous winners, and then some key stats from my model. 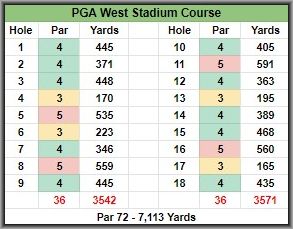 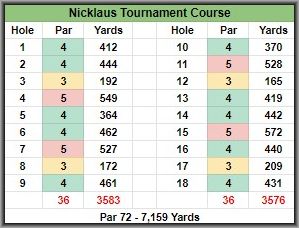 No better place to start the model this week as both courses have ranked inside the Top 10-15 easiest every season. Since the PGA West Stadium Course took over as the host course in 2016, the winning score has topped -20 every year and exceed -25 three times and in each of the last two years.

This is a stat I turn to on Fantasy National to help identify players on the verge of a breakout if the flat stick gets hot.

While most of the birdies will come on the easier par 5's(591 yards the longest and only two over 570 yards), it will be the Par 4's where a player can separate themselves from the field. With 11 of the 20 Par 4's falling between 400 and 450 yards, this is the range I will be keying in on when doing my research.

While the field is on the weaker side this week the top tier is loaded with intriguing options. I am going right to the top with my first pick as Cantlay not only ranks #1 in all my models, he also ranks #1 in our projection system. He returns to the American Express for the second time, grabbing a Top 10(T9) back in 2019, and comes in with some nice form with Top 20 finishes in four of his last five events including a win at the Zozo Championship. He is one of the best ball strikers in the field(ranked 8th on the sheet) and is, by far, the safest of the top tier golfers in terms of a floor. I will have a ton of exposure in GPP and currently even considering using him in a stars and scrub cash build.

Don't let weeks missed cut get in your head here as Ancer is once again in a great spot in this week(ish) field. He missed the cut on the number and before last week had tallied Top 20 finishes in four straight and had made cuts in eight events going back to the start of the new season. He now returns to The American Express where he has seen massive improvements year to year starting with a T76 back in 2018, T18 in 2019, and runner-up performance a year ago. All things considered, his price seems like a bit of bargain relative to the field making him my favorite PTS/$ play in the top tier.

Howell was my top mid-tier target for cash last week and it played out as planned as he finished with a T19 overall and T27 in DraftKings scoring. While he only made 16 birdies the daily total went up in each of the final three rounds(3, 4, 6), and the even better news is that he went the entire event with just one bogey. Howell doesn't have the same elite course history this week but has made four of his last five cuts with three Top 20 finishes. With a price that dropped slightly on both sites, CHIII is once again firmly on my cash game radar once again.

Burns stands out in a huge way coming in at #5 in my overall rankings thanks to checking almost every box. It starts with course history as he has been tremendous here with a T18 in his first trip in 2019 and followed that up with a T6 last year where he finished with a final round 63. He also stands out statistically ranking 5th on the sheet in SG: Ball Striking, 8th in Par 4 Scoring, 6th in Par 5 Scoring, 8th in Birdie or Better %, and 20th in SG: Putting on Bermuda. He hasn't played since November but the price on DraftKings is just too good to pass up and he is in play for me in all formats.

Straka is definitely going to be chalky this week and it makes sense as he has been terrific to start the season. With T25 last week, he has now made the cut in eight of nine events with four Top 25 finishes and has gained a whopping 18.5 strokes on approach in his last four events with shottracker. He missed the cut here in his first trip in 2019 but bounced back in a huge way last season when he finished T4 overall and T2 in Strokes Gained: Approach. I will have exposure in all formats.

Going down even further we find Vaughn Taylor who stands out as an upside value play for a couple of reasons. First of all, he has been solid here at this event making the cut in three of four trips including a T7 in 2018. It is a bit concerning he has alternated missing/making cuts for a few months but the good news is that he has gained strokes on approach in four straight events with shottracker and ranks(in this field) 4th in Proximity and 3rd in Opportunities Gained over the last 12 rounds. If he can even just putt field average this week, he should be able to easily pay off his price tag.