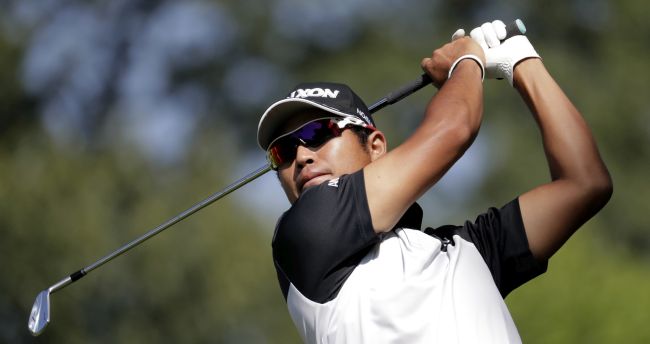 This week starts with a bit of a rant as I am pretty disappointed in myself for not playing the Pete Dye narrative more last week. Let's break it down using Fantasy National Golf Club and look at Tee to Green rankings(all players on Tour) on Pete Dye courses(L50 rounds) and their finish last week:

That is about as far as I will go as the knife just keeps cutting deeper as these are players who were either in my player pool or at least are consistently throughout the season(outside of Molinari). Moving on!

This week the Tour stays in Cali and moves to Torrey Pines, right outside of San Diego, for the Farmers Insurance Open. Like last week, players will have a multi-course rotation to deal with as they will play one round on each of the South and North courses on Thursday and Friday. Those players who make the cut will then play out the tournament on the South course on Saturday and Sunday.

Speaking of the South course, it will also host the 2021 U.S. Open in June. Headling the field is World #2, Jon Rahm who is back after a Monday WD last week following a supposed injury in the gym. Joining him are two others ranked inside the Top 10(Schauffele, Mcilroy) and 24 of the Worlds Top 50 golfers.

Being a Seaside course, the weather is always a huge factor in the winning score so be sure to check the forecast before setting your lineups.

From a strategy standpoint for showdowns, I will be looking at loading up on players on the North Course for the first two days as it is by far the easiest of the two courses and almost 500 yards shorter.

With that said, let's look at the courses, some top stats, and then dig into my core plays in each price range. 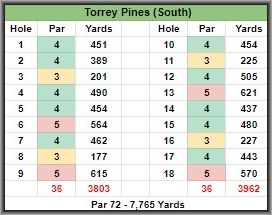 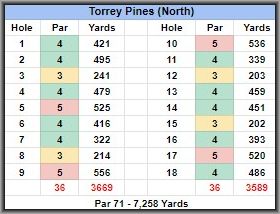 My stats model will be focusing primarily on the South Course as it will be used in three of the four rounds.

Strokes Gained: Off the Tee/Driving Distance

With the South course listed over 7,700 yards(longest course on regular tour calendar), off the tee and especially distance will be at the top of my list this week. Not that shorter hitters can't succeed here but the room for error is reduced greatly without those extra yards off the tee. Seven of the 10 Par 4's on the South Course are over 450 yards(three over 475 yards) and two of the par 5's are over 600 yards.

While distance is more important than accuracy(field averages around 50% fairway accuracy) a player can really gain an advantage if they are both hitting it long and accurate so SG: Off the Tee as a complete stat will be weighed this week.

The greens here at Torrey Pines are smaller than average(4,500 sq feet) and have produced a GIR rate of 60-65% over the past five years. The approach is key but there are also multiple different things I look at to break it down even further and it really comes down to the golfer you are targeting.

On my sheet, I will be weighing Par 4 scoring and long iron proximity in concert. If using Fantasy National or another service that provides the Par 4 scoring by distance, I would consider running it over just straight par 4 scoring as 12 of the 20 Par 4's overall are 450+ yards this week.

With smaller greens and a large amount of approach shot coming from 175+ yards, the GIR field average should once again be below Tour average. This will lead to a lot of scrambling which will be key in not losing strokes to the field. This is more of a stat I will mix in for my cash games model.

There is definitely some concern with the two players priced over 11K/12K on DK and FD respectively. Jon Rahm withdrew a week ago after hurting himself in the gym and Rory hasn't played since the Masters in November. I love both for GPP formats but for cash games, I drift down to Finau who comes in at #2 in my overall model. He had a chance to win last week but once again found a way to NOT win further learning the nickname "Top 10 Tony".

While some may be sour on that, I will gladly take Finau who checks every box starting with course history as he returns to Torrey Pines with Top 25's in all six appearances including Top 6 finishes in three of the last four years. In terms of form, he is one of the most consistent players on Tour making 16 of 18 cuts since golf returned in June with seven Top 10's and 10 Top 25 finishes. All things considered, he is my top PTS/$ this week.

Hideki has been good, not great, to start the year but at a price, back down in the low $9K range on DraftKings, I fully on board. He has made seven of eight cuts with five Top 25 finishes and comes in trending upwards having shot in the 60's in five straight since a terrible start to the Tournament of Champions. At the Sony, he gained a whopping 6.8 strokes on approach but continued to struggle with the putter. If he can even get back to field average with the flat stick, he should be lurking on Sunday with upside to win and smash his price from a PTS/$ standpoint. I like Hideki in all formats and will be laying an outright bet on him, as well.

While it appears everyone and their dog(socially distanced, of course) will be on Gary Woodland, I will be making the bold pivot to Corey Conners in all formats. Not that I don't like Woodland but Conners is cheaper on Draftkings and has better form and ranks much higher on my stats model. Looking at that form, Conners has made seven straight cuts including four straight Top 25's and Top 10's in two of his last three events(RSM Classic, The Masters) and ranks 4th in Ball Striking9in this field) over the last 24 rounds. I will some exposure to Woodland but overall underweight on the field and the complete opposite with Conners who will be one of my highest owned players this week.

Davis is coming off a strong 3rd place finish last week and should be a bit under-owned this week with Woodland chalk in the same range. Like Conners, he also ranks much higher in my overall model sitting 24th in SG: Ball Striking, 9th in Driving Distance, Top 30 in both long iron proximity ranges, and Top 15 in both par 4 and 5 scoring. He has also improved his finish in each of his three trips to Torrey Pines(T58, T57, T38) and now comes in with much better form so I see another career high in the Top 25 range with upside of another Top 10.

Looking at the rankings, you think I am a little nuts for liking Homa so much but hear me out. He has not only made the cut in four of his last five events, but has Top 25's in each of his last two and those could have easily been Top 10's if not for one terrible round in each. He struggled here missing the cut in each of his first three trips(2014, 2015, 2017) but broke through last year finishing T9. At these prices, I am not seeking another Top 10 but it is nice to know that upside is there.

At first, I thought the model was drunk with John Huh sitting at #16 but quickly realized why as he checks every single box. It starts with his stellar form as he enters the week having not only made the cut in all five events this year but finishing Top 25 in four of them. He has gained strokes on the field off the tee in four events and on approach in all five and still finished T21 last week despite losing 4.7 strokes with the putter. At these prices, he is my favorite PTS/$ value play and in play in all formats.