Normally the PGA Tour would be heading South to Mexico for this World Golf Championship but once again COVID-19 has forced a schedule change. Instead, the Florida swing will start a week ahead of schedule with a newly sponsored WGC event, the Workday Championship. With any WGC event, the field is absolutely loaded with each of the Top 10 and 48 of the Top 50 players in the World teeing it up this week.

The host course will be the Jack Nickalus-designed Concession Golf Club which is a par 72 that stretches over 7,400 yards and features Bermuda greens. We don't have much data to point us to how this will play out but just looking at the course overview on the PGA Tour website, it is easy to tell this will be a challenge for the golfers. It is a typical Florida course in that there is a ton of water in play(13 of 18 holes) and it is combined with a whopping 73 bunkers. It doesn't end there as the most unique and challenging part of the course(projecting) appears to be the greens. Overall, they are slightly smaller than average(6,000 sq ft) and very undulated with lots of run-off areas.

It is going to take a complete game to contend here so from a fantasy perspective, I will be targeting players who are in form in almost all areas. Be sure to check out my top stats in my model below and then we will get into the picks. Also, remember this is a no-cut event and all players will get four rounds which can lead to a more stars and scrubs build strategy. 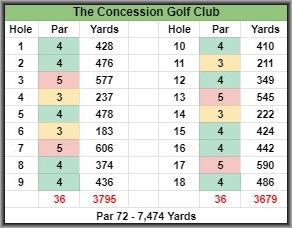 It is going to take a complete game to contend come Sunday afternoon but it is the iron game that I am expecting to show up as the most important. The greens were designed to be very tricky being smaller than average with undulation making Proximity substantially more important than just GIR. In terms of proximity distances, it really depends on the player you are targeting. If targeting Bryson, DJ, Rory, and other bombers look at the mid-iron ranges(150-175). If targeting a shorter player or one who may play things a little more "safe" off the tee look at the long-iron ranges(175-200 & 200+ yards).

With the Par 5's likely to play very tough this week(from looking at them on flyovers + reading PGATour.com article) I am thinking a lot of the scoring will come from the Par 4's. Seven of the 10 of them also come in under 450 yards so combining this stat with SG: Approach should lead us to players who will have success this week.

With challenging green complexes this week, I will have SG: Around the Green weighted quite high and will also put a little more emphasis on Sand Save % with all the bunkers surrounding the course, especially around the green.

I really don't think you can go wrong with either 11K player at the top this week as both Rahm and DJ are trending up at the moment. Both have gained a ton of strokes on approach(DJ-8.9, Rahm-10.2) over their last two tournaments but both have struggled putting losing strokes in both events. It is splitting hairs but I lean Rahm slightly due to being a bit cheaper and he has been about 1.5-2 strokes better off the tee lately which should play a big role with all the danger lurking. Either way, I will have exposure to both players this week.

Hovland didn't fare so well in his first WGC event last year finishing T59 after a terrible putting performance(-4.9 strokes on the green). He comes into this WGC event with a lot more momentum as he has Top 5 finishes in three of his last four events including an already second career win at the Mayakoba Golf Classic in December. More recently he has a T2 at the Farmers and T5 last week at the Genesis while gained 4.1 and 5.4 strokes on approach respectively while also gaining strokes putting in both. He is in play in all formats for me this week as the floor is high as he has made 20 straight cuts going back to March last year and also comes with a ton of upside.

Is it just me or are there a ton of players in this $7K range on DraftKings that feel massively underpriced? Jason Day is one of them for me and while that may seem insane to say given the roller coaster ride that he provides us in DFS, the PTS/$ upside is just too hard to ignore. First of all, he has a great track record at WGC events with finishes of 11th or better in four of his last five(non-match play WGC's) and is coming off an impressive T7 at the WMPO where he shot in the 60's in all four rounds and gained 10.7 strokes total. At these prices, Day is in play in all formats for me this week.

I feel almost the same about Fitzpatrick as I do Day this week as both have been a bit up and down keeping their prices in check but also providing a ton of PTS/$ upside. After missing the cut at the US Open to start the 2020/21 season, Fitz has made four of five cuts including a T5 last week at the Genesis in which he gained strokes in every strokes gained area(8.4 total). Looking at his ball-striking, he has gained strokes on approach in five of his last six(with shot tracker) and gained strokes both OTT and on APP together in four of those events. To top it off, he has been tremendous at the stroke-play WGC events lately finishing Top 10 in three of his last four. He can compete with the big boys and at his price might even come a bit lower owned this week.

Another player who jumps off the page as underpriced this week is Ryan Palmer who has been $8,400+ on DraftKings in each of his last three events. What stands out more is the consistency as he has made seven straight cuts this season with two Top 10's and three Top 25 finishes. Looking at the stats since the start of the season, Palmer ranks(in this field) Top 20 in SG: Tee to Green, 12th in SG: Approach, 8th in Par 4 Scoring, and 8th in Birdie or Better Gained. All things considered, he is my top value play this week.

Speaking of consistency this season at a discount, Lanto Griffin comes into this week having made eight of 11 cuts with two Top 10's, one of which was another no-cut event, the CJ Cup. The one concern I have is that he has lost strokes around the green in six straight events but the Lanto we want is the one that is on point with the irons and he has gained strokes in that area in nine of his last 10 events. That is also backed up long term as he is 14th in SG: Approach on my sheet and leads all players under $7K. He is in play in all formats.