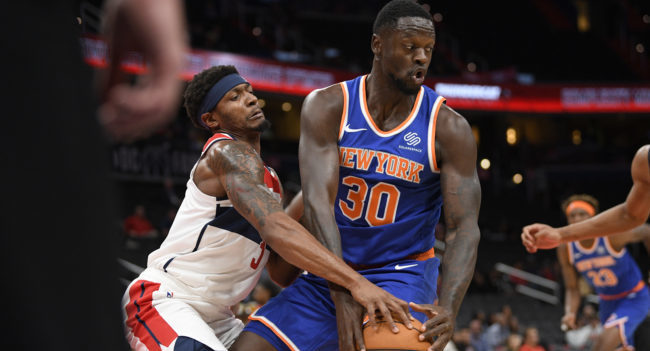 In close games, Chris Paul is playing mid-30s minutes for the Suns. It’s the “close games” part that could be a problem here with Phoenix -10 road favorites against Minnesota on Sunday. But if you can trust the latter to keep the game even remotely close, then this is a great spot for CP3. The Timberwolves are a bottom-third team defensively this season and run a top-5 pace. I like Paul’s FanDuel price a little more than the DraftKings one, but he’s in play on both sites. When the minutes have been there over the last two games, he’s averaging 17 points, 13 assists, and seven rebounds.

He’s playing on the back-to-back here so I’m a little worried that they manage the minutes on the 32-year-old. But this is also Thibs, so anything is on the table. On Saturday, Rose turned back the clock and had one of his best games in the last few years. He put up 17 points and 11 assists in 38 minutes, helping the Knicks beat the Pacers. This is another good spot against the Pistons on Sunday. The price didn’t really move at all and if the minutes are in the mid-’30s then he’s more than a value on Sunday’s slate.

There are lots of good point guard options on this slate and the choices might be tough. It would be totally fine to run John Wall (FD 8800 DK 8300) against the Grizzlies with Victor Oladipo out.

Also, LaMelo Ball (FD 7600 DK 8800) could once again be a popular play, especially on FanDuel against the Kings.

Gordon should draw the start for the injured Victor Oladipo on Sunday and should see a lot of minutes. He can push to 34-35 minutes when he’s in the starting lineup and has seen decent usage on this team thanks to all of their injury issues and lineup shuffling. Over the last month, he’s putting up 15 shots per game and putting up 20 points in that stretch. The three-point shooting continues to underwhelm at 33% but he’s getting up close to nine attempts per game. The price didn’t move enough on the Oladipo news and he is a high floor cash play.

Devonte' Graham remains out of the lineup and the Hornets have been playing their backcourt and wings a lot of minutes in the short-term. Rozier has played 36 or more minutes in five of the last six games and in that stretch is averaging 26 points and four assists per game. He’s very scoring dependent which will give some volatility to his performances, but the FanDuel price is way too low at this point. The matchup against the Kings is a great one considering the latter has the worst defense in the league and this game features the highest total of the day.

Gordon Hayward had an injury tag, but he’s set to play in this game against the Kings. And like I mentioned with Ball and Rozier, this is almost too good a matchup to pass up. The Kings rank dead last in defensive efficiency this season by a (un)healthy margin. Stacking Hornets on this slate, especially considering some of their injury issues will have the highest floor around. Hayward has been pretty bad over the last couple of games, struggling from the field and failing to add much in the way of secondary stats. I do think some of that is drummed up to outlier performances, and the scoring should round out in this matchup. His price has also dipped some over the last week leaving this a great spot to buy.

The Rockets are getting short on bodies these days, shipping out Demarcus Cousins and now with Victor Oladipo on the shelf. It’s mean more minutes for House who’s played 33+ in each of the last two games. He’s gotten up 22 shots in that stretch and has shot the lights out from three over his last four games, knocking them down from beyond the arc at 55% on five attempts per. Small forward is a weaker position and House won’t break the bank for you here against Memphis.

I think we can stack Knicks' power forwards on this slate when they face the Pistons. Detroit does tend to run bigger across the board and these two will get a chance for a lot of minutes again. They are running on the back-to-back, but I’m not all that concerned about it like I am with Rose. Statistically, Randle is having the best season of his career, averaging 23 points, 11 rebounds, and 5.5 assists per game. He’s playing a ton of minutes in close games which has given him one of the higher fantasy floors around at the position. The price is up there, but I think he’s a strong cash game value here.

Meanwhile, Noel got the starting job when Mitchell Robinson went down with the injury. The performance hasn’t been entirely consistent, but the price hasn’t come up all that much either. He played 41 minutes on Saturday, but 24-25 has been more in the cards for him of late. He will need every minute to get there though considering he’s struggled to get to double-digits in scoring even with the run. But the rebounding is solid enough and he’s averaging more than two blocks a game over the last four.

The Rockets no longer have Demarcus Cousins and are just an undersized team in general. They’ve gotten killed on the glass the last couple of games and have no functional defensive plan to match up with Jonas here. Valanciunas could really put up a monster game. And he definitely has it in him. He’s put up double-digit rebounds in each of his last six games and over the past month is averaging 18 points and 12 boards per game. The Grizzlies could feed him early and often in the post. He’s a near-cash game lock at the position on both sites.

If you want to go a little cheaper in a good matchup, Ayton could be an upside play against the Timberwolves. They get bigger with Karl-Anthony Towns around, but the defense is still total garbage. The rebounding comes and goes for Ayton, though he definitely has double-double upside in him averaging 11 rebounds per game over the last month. They tend to come in fits and spurts though. This is strictly a matchup play against the Timberwolves, but Ayton is definitely behind Jonas in terms of cash game safety.