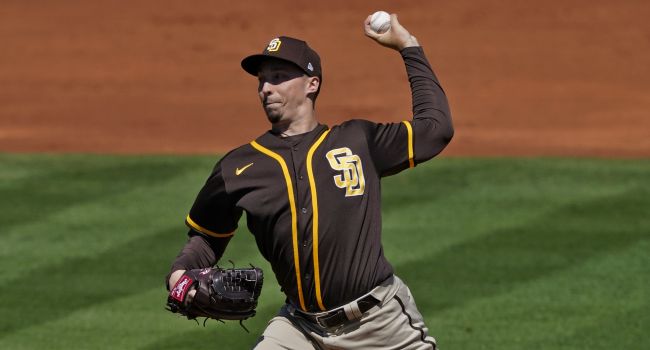 We saw a little bit of everything on Opening Day including two postponed games, a snow game, and some top aces getting hit hard early. On Friday, we get a smaller six-game main slate so let's dive in and look at some core plays at each position for FanDuel and DraftKings.

The top of the salary gives us two elite pitchers making their debuts with their news teams and both are in play on this small slate. I lean Snell for a couple of reasons and it starts with the slight discount($500 on FD, $800 on DK) which could allow us some upgrades with our bats if you are not just stacking them together(DK). Snell also gets the better matchup at home in Petco Park vs. the D-Backs who were a bottom-five team vs. left-handed pitching last season. Fire up Snell in all formats.

If you aren't paying up for both Bauer and Snell I like going right down into the value range for my SP2 on DraftKings. Lopez was terrific in a shortened Covid season in 2020 as he allowed two or fewer earned runs in nine of 11 starts for a 3.61 ERA and while he had an average K rate(24%) he covered that with an elite ground ball rate(52%). He takes the mound in game two for the Marlins and faces a Tampa Bay team that struggled yesterday and was just league-average vs. righties in 2020 but struck out 26% of the time.

While it was a shortened season in 2020, it was nice to see a bounce-back for Hosmer(.287/.333/.517) after two disappointing seasons since signing in 2018. He is in a dream spot hitting in the cleanup spot behind Tatis and Machado and will get plenty of opportunities to cash in this season. It started yesterday as he went 3 for 4 with a dinger and three runs batted in an 8-7 Padres win. The matchup is fairly neutral here but Hosmer gives us a more balanced approach if not paying up for Abreu and crushed righties last year to the tune of a .409 wOBA and 160 wRC+. Fire up Hosmer in all formats.

At catcher, I am drawn to this A's/Astros game and both projected catchers are in the same price range on DraftKings. Let's start with Murphy who may not deliver a ton of consistency in terms of average(.237 career average) but has delivered a .361 wOBA and 133 wRC+ through two seasons and is coming off a shortened season in which he posted a .369 wOBA, 139 wRC+ and .232 ISO vs. righties.

Maldonado is more of a GPP pivot in the same price range as he hits down in the nine-hole for the Astros. What stands out with Maldonado are the splits as he posted a .381 wOBA,  and 147 wRC+ vs. lefties last season.

Here at DFSR, we like our leadoff hitters and while Fletcher doesn't provide a ton of upside he more than makes up for it with his PTS/$ consistency. He is coming off a 2020 season where he posted a .319 average and .376 OBP and gets the pleasure of hitting in front of Mike Trout and Anthony Rendon. The dazzling 1.99 ERA for Keuchel last season is mostly smoke and mirrors as he posted an xFIP(3.98) two runs higher with an ugly 16% K rate. Fletcher is my top play at second in all format tonight.

If you are a premium subscriber you may have noticed the system's new love for Dodgers youngster Gavin Lux. He is coming off a nice spring but that isn't why he stands out. It comes down to the Dodgers starting the season in Coors Field where they all receive a nice park factor boost. Lux didn't break the slate on opening day but did go 2 for 4 with an RBI and is still priced fairly and is a nice value play without having to go away from the chalk team.

It' a take your pick at the top of the shortstop salary today and the system leans Seager slightly and like a broken record, it comes down to the matchup in Coors Field. After two somewhat average seasons, at least for him, Seager broke out in the shortened season in 2020 with an elite .307/.358/.585 slash line with 152 wrC+ and faces Senzatela who struggled to strike anyone out(13.5% K rate) while giving up a near 40% hard contact rate. Seager is a strong candidate for top payup option on this slate.

Solano is listed at second and shortstop on FanDuel and is a top value play hitting in the top third of the Giants order in 2021. He didn't provide much, if any, power upside(3 HR) in 2020 but was very consistent hitting .326 with a .357 wOBA overall and was also solid against lefties with a .373 wOBA and 138 wRC+. You can do much worse at these price points and he makes a great value utility play on both sites to help load up at pitcher and with top bats.

You honestly can't go wrong with any of the top four at the position today but drawing my attention right off the bat is that Just Turner is the cheapest of the four on both sits despite a matchup in Coors. That is enough to tip the scales and put him at #1 in my PTS/$ ranking. He wasn't great on opening day but did pick up a hit that drove in a run and he also scored another while not striking out. He has also gotten better vs. righties every year and had reverse splits in 2020 with a very impressive .397 wOBA and 154 wRC+ in the split. Fire up Turner in all formats.

While Longoria is definitely past the 7th inning stretch in his career, he can still provide fantasy upside against lefties. That is exactly what he did on opening day as he went 2 for 5 including a solo shot off Marco Gonzalez. He also comes at a nice price considering he is hitting cleanup for the Giants and faces another lefty in Kikuchi who gave up 4+ earned runs in five of his nine starts in 2020 and has yet to record a season with a sub-5 ERA. Longoria is in play for me in all formats.

**Betts, Trout, and Bellinger are all elite plays in the outfield and it will depend on your lineup construction as to which one I like best. Instead, let's look at a couple of value plays to help us fit those stars in our lineups.**

The value in the outfield starts with Austin Slater tonight as he is hitting leadoff for the Giants, at least against left-handed pitching. He showed why on opening day as he went 1 for 2 with a walk and home run against Marco Gonzalez and is coming off a 2020 season where he posted a .470 wOBA and 202 wRC+ against southpaws. If he is back in the leadoff spot, he will be a staple in optimizer lineups.

I know I wrote up Lopez in the pitcher section but in the lineups I don't have him, I will have Austin Meadows. his season ended early in 2020 due to an oblique injury but is back and ready to be a staple in the Rays lineup leading them back to the playoffs. If it feels like I am chasing home runs a bit, I totally am. I love players who start the season off with some momentum and Meadows hit one out yesterday and feels about $700-$1000 cheaper than he will be in a month. Get on it now!

Also Consider: AJ Pollock(LAD ranks high in terms of PTS/$ in our system and is a nice value in Coors. I also like stacking the bottom of the order for the Dodgers in GPP