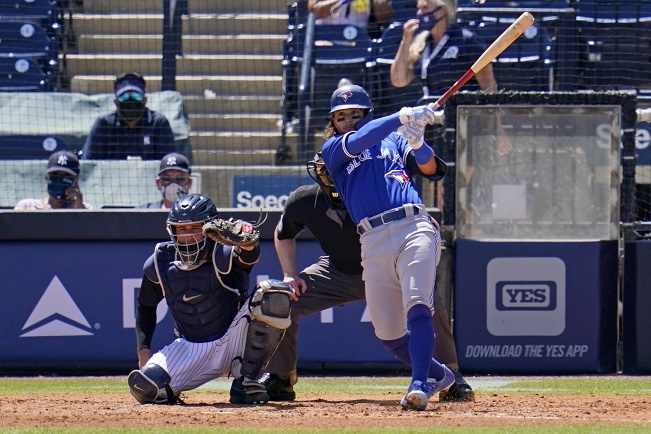 Oof, how about that Wednesday slate? Things were running smoothly in the MLB season before that, and then the COVID stuff went crazy on the league. That's inevitably going to happen, though, and it's even more frustrating when there's questionable weather all across the country. That's likely going to be the case again here, and it'll be key to monitor weather reports before submitting lineups. Much like most Thursdays, we have games spread throughout the day. We're going to focus on the night slate beginning at 7ET, though, so let's go ahead and get into it!

This makes me sad to say as a lifetime Rockies fan, but this honestly might be one of the worst lineups in baseball. Even with Nolan Arenado last season, they finished dead-last in hard-hit rate, exit velocity, and xwOBA. That's certainly been the case in the early going, with the Rockies having four combined runs over their last four games. That's even less surprising when you see that this team traditionally struggles on the road, posting the worst road OPS in baseball last season. All of that makes Urias hard to avoid, with the southpaw averaging 19.4 DraftKings points per game, the highest total of any pitcher on this slate. Not to mention, the Dodgers enter this matchup as a massive -300 favorite.

It's always just a matter of health when it comes to this guy and when he's on the mound, Dick Mountain is an uphill climb for opposing hitters! In fact, he's got a 3.01 ERA and 1.06 WHIP dating back to 2015. That's a long time to maintain numbers like those, and he even has a 25 percent K rate in that span as well. You might be worried that he's starting to lose it at his age, but a 1.10 WHIP and 9.9 K/9 rate through two starts would indicate that he's just fine. The best part about using him is this matchup, though. Texas just got no-hit last week and currently ranks 21st in OPS and 28th in total strikeouts. They're also traditionally worse against lefties, and that's bad news against a funky southpaw like this.

Nunez has sneakily been a really good hitter throughout his career, and he continues to be overlooked in the fantasy baseball community for whatever reason. The thing that's made him so good is that he rakes against lefties. Since 2018, Nunez has a SLG approaching .500 against southpaws while generating an OPS north of .800. That alone makes him hard to fade, and he's been rolling coming into this matchup. He's homered in two of his last three games, carrying this Tigers lineup to some shocking results over some dominant Astros pitchers. It's not like Manaea really scares us either, posting a 5.06 ERA and 1.50 WHIP so far this year.

Tellez went yard on Tuesday and was rewarded with the silent treatment from his Toronto teammates. That's some harsh treatment, but this dude deserves some high-fives! One of the major reasons why he got the silent treatment is because he had just one hit in his first 25 at-bats, but he's a better hitter than that would indicate. In limited action last season, Rowdy had a .346 OBP and .540 SLG. Those numbers mean that he should be about $1,000 higher, especially considering he had a .910 OPS against right-handers last year as well. Junis's main issue throughout his career has been the long-ball, which is bad news with the pop Rowdy possesses.

If you need a catcher, Will Smith is a good bet in a Dodgers stack.

Lowe has been downright horrific in the opening week of the season, but it's gotten his price to a number we can't overlook. We're talking about a guy who had a .362 OBP, .554 SLG, and .916 OPS last season. He also carried this team at times throughout last year's postseason, and one has to believe it's just a matter of time before he starts rolling. One reason we could see it start here is because of the matchup. Jordan Lyles has a 5.21 ERA and 1.44 WHIP for his career, and it also gives Lowe the platoon advantage from the left side.

If you're looking for a sneaky stack, look no further than The Motor City Kitties. These guys have been blowing up my ERA and WHIP in my season-long formats, putting it in on the Astros throughout the week. These guys are particularly scary against left-handers, with Schoop, Wilson Ramos, Nunez, and Jeimer Candelario all batting from the right side. Schoop has always killed southpaws throughout his career, too, generating a .534 SLG and .867 OPS against them since 2019. That's a heck of a mark from a guy flirting with the minimum, and Manaea's lackluster K rate makes the Tigers a sneaky lineup to use.

Big Bo really struggled in his first five games of the season, but he's been absolutely raking since then. In fact, he's got an OBP north of .400 over his last eight games played, providing four homers, three doubles, 11 runs scored, 10 RBI, and two steals in that span. That makes him a Top-10 player in that stretch, living up to the lofty draft price people were paying for him in season-long formats. Those sort of averages actually means that he's a little too cheap on DraftKings and FanDuel, and we're certainly not worried about him facing Junis. The Royals righty had a 5.38 ERA and 1.45 WHIP through 2019-20 and is due for some negative regression after facing some bad offenses in his first two starts this year.

Andrus is not the guy we saw a few years back, but he's too good to be this cheap. He's actually one of the cheapest options on this slate, and it's hard to understand why when you look at some of his splits. Throughout his career, Elvis is hitting .280 against southpaws while providing a .736 OPS. Those power numbers are nothing to write home about, but it's hard to overlook averages like those from a guy this cheap. Getting to face Tarik Skubal only adds to Andrus' intrigue, with the Tigers lefty owning an ugly 6.10 ERA in 41.1 career innings at the Major League level.

It's wild that we haven't gotten to any Dodgers yet but don't worry, they'll start flowing in! They get to face the Rockies here as a -300 favorite, projecting this lineup for over five runs. That's really no surprise when you consider this matchup, with Austin Gomber gobbling up a 1.41 career WHIP. That's a terrible mark in over 113 career innings, and we have to believe the Dodgers will put it to him here. Turner is probably our favorite play of the bunch, batting in the heart from the right side. Since 2019, Turner has a .553 SLG and .918 OPS with the platoon advantage in his favor. He's been crushing in the opening two weeks, too, generating a .378 AVG and 1.091 OPS which doesn't even include another dinger on Wednesday.

The A's are one of our favorite stacks of the day despite their recent struggles, and Chapman would definitely have to be the focal point of that stack. Not only is he arguably the most valuable hitter for the A's, but he's also one of the few guys who gets to hit from the right side. Despite struggling against southpaws in 2020, Chapman's OBP is higher against lefties throughout his career. We also don't mind that he's starting to find his swing, combining for 43.9 FanDuel points over his last two games. We already discussed how Skubal is a good matchup and that only adds to Chapman's value.

Robles has some really ugly statcast data, but the Nationals believe they have something in this kid. That's why they've chosen to bat him leadoff for most of the year, and that alone makes him a good option on this slate. We say that because it's rare to find a leadoff hitter for one of the highest projected lineups this cheap. So, while we don't necessarily like the player, we love the opportunity and the matchup. The Nationals get to face off with Merrill Kelly, who's got an 8.10 ERA and 1.70 WHIP this season. If you have the salary, be sure to get Juan Soto in there if you want to stack these guys,

If you're looking for a cheap bat in the Dodgers order, look no further than Pollock. This was actually one of the most surprising prices I saw on this slate, and it's hard to understand what these DFS sites are thinking. Dating back to 2019, Pollock has a .331 AVG, .374 OBP, .620 SLG, and .974 OPS with the platoon advantage in his favor. That's no surprise when you look at his career averages, and those numbers indicate that he should be about $1,000 higher on both sites. That's bad news for a guy like Gomber, especially with the Dodgers projected for so many runs. We also like Chris Taylor and Mookie Betts as part of this stack, but they cost more.

Let's finish off our A's stack with Piscotty. This dude was horrible in his first six games of the season, but he's gone on to pick up a hit in three of his four games since. In fact, he's got two doubles and a homer in those three games, recapturing the form that opened up Billy Beane's eyes. What we really love is that he crushes left-handed pitching. In fact, Piscotty is hitting .324 against southpaws since 2018, generating a .522 SLG and .874 OPS in that span.