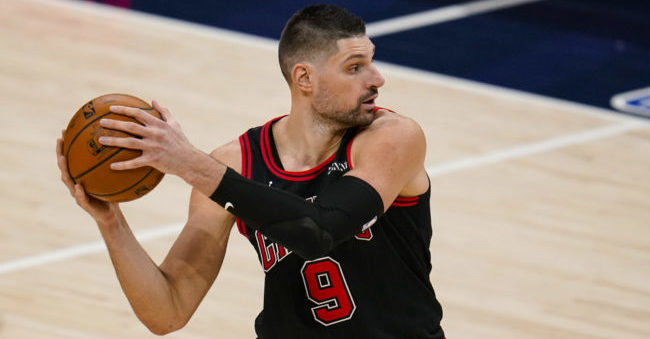 These slates can be very frustrating with limited information available, but we know a ton going into this one. That has me excited for this article because I really feel like we have a good grasp on the value. There are numerous superstar players missing, and it's going to lead to some great plays. There's a lot to discuss, so let's go ahead and get into it!

I hear the Hornets are setting up some try-outs before the game if you have interest! They're currently missing Gordon Hayward, LaMelo Ball, Malik Monk, P.J. Washington, and Devonte' Graham. That's pretty much the whole rotation, and it should allow Scary Terry to feast. With all of those guys off the floor, Rozier leads the club with a ridiculous 36 percent usage rate while providing 1.3 DK points per minute. Those are incredible numbers for a guy who's already in the midst of a breakout season, averaging 35 fantasy points per game. The icing on the cake is the matchup, though, with Brooklyn ranked 24th in points allowed and 25th in defensive efficiency.

This is a risky play with White's role falling off a cliff recently, but one would have to believe he'll be one of the focal points of the offense here. We say that because Zach LaVine is out for the next week. That means about 20 shots, 35 minutes, and a 30 percent usage rate is out of the lineup, and White should be the one taking on most of that. If you look at the 42 games that White has played at least 25 minutes, he's averaging over 28 DraftKings points per game. If you get that from someone in this price range, you've stumbled into one of the best values of the day.

Ja Morant is hovering around $7K on both sites and has one of the highest upsides of any player in that price range.

It's risky to use a guy in his first game back, but FVV could be busy here. Toronto has already chosen to rest Kyle Lowry, Pascal Siakam, and OG Anunoby for this game, and it's going to leave this rotation extremely thin. The numbers with those guys off the floor are absolutely absurd for FVV. The former Wichita guard leads the club with a 40 percent usage rate while averaging 1.62 DK points per minute. That's a 127-minute sample size as well, which is honestly one of the biggest rates I've seen. All of that makes him really hard to fade, and it's not like this Orlando team that traded away all their players is going to slow him down. Not to mention, FVV is averaging 49 fantasy points per game in his two meetings with the Magic this season.

I truly believe that I know how to spell every single player's name in the NBA except this guy. I mean, look at all those consonants and vowels! In any case, a name like that has to have some game. While Svi is unlikely to be your highest-scoring player, he's one of the best bets out there to reach 5X value. Over his last 14 games played, Mykhailiuk has at least 21 fantasy points in eight of those. He's also averaging about 27 DK points per game in those eight outings, which is a stellar total from someone this cheap, particularly on FanDuel. The Thunder rebuild is the thing that's really allowed him to grab this big role, and we have to believe he'll get big minutes against the team that traded him.

Will Barton is looking at an increased role with Jamal Murray out.

We were unclear who the guy would be filling for Jamal Murray, but early results would indicate that MPJ wants to step up more. With Jamal off the floor, Porter is second on the team in usage while providing 1.2 DK points per minute. We love that with his recent form, scoring at least 30 fantasy points in 24 of his last 25 games. I watch the Nuggets every time they play, and even that statistic surprised me. That has led to a 36-point average in that span, too, which is why we have this lofty projection. The matchup isn't too bad either, with the Rockets ranked fifth in pace and 25th in points allowed.

The Bulls will have all hands on deck with LaVine out for the foreseeable future, which means Williams should be in for some extra usage and run. He's already been getting all the minutes he can handle, playing over 30 minutes a night since the beginning of February. There aren't many players doing that, let alone guys who are sitting around $4K. What we really like here is the matchup, though, with Memphis surrendering the third-most fantasy points to opposing small forwards. All of that means we need 20-25 fantasy points out of Williams, and that's right on par with his average in that span, too (22 FPG)!

Brandon Ingram gets to face Washington, so 50 fantasy points might be incoming.

McDaniels is probably burned into your laptop or phone screen with how much he's been in this article recently. His recent results definitely indicate that we've been getting it right with him, though, playing the best basketball of his short career. The youngster has now played at least 29 minutes in six straight games, averaging over 31 DraftKings points per game in that span. That's a huge total from a sub-$6K player, and he should be in for even more usage here with all of the guys out that we mentioned in the Rozier write-up. Brooklyn has been struggling with opposing PFs, too, owning a 21st OPRK against them this season.

Gordon has shown that he can be a great playmaker in his Magic days, and it looks like he's going to have to step up in the absence of Murray. In the first game without him, AG dropped 32 fantasy points in one of his best games as a Nugget. That's actually right on par with his Orlando averages, and he should be able to duplicate that in a matchup like this. Houston has the ugly defensive statistics we mentioned in the Porter write-up, and they also surrender the seventh-most fantasy points to opposing power forwards as well. That makes it hard to believe Gordon is below $6K, making him a fantastic bet to surpass 5X value.

It sounds like Mason Plumlee will sit, which will force Isaiah Stewart into a start.

The Bulls paid a lot to get this guy, and it's now his show with LaVine out of the picture. In the limited minutes with LaVine off the floor, Vooch leads the club with a 27 percent usage rate while averaging 1.53 DK points per minute. That stellar rate looks even better when you consider Vucevic's floor, scoring at least 32 fantasy points in all but one game this year. Having a rate and a floor like that means that he should be in line for at least 50 fantasy points here, which is what our projections say as well. The matchup isn't too shabby either, with Vooch dropping 46 DraftKings points against the Grizzlies earlier this year.

Boucher is always a risky play, but we want to hop on the train when we feel like he's going to get big minutes. We certainly expect that to be the case here, with Lowry, Siakam, and Anunoby all sitting out. That means Boucher might start and should play at least 30 minutes. If that's the case, Boucher should probably be closer to $9K. This might sound lofty but wait until you hear these numbers! In the 20 games Boucher has played at least 28 minutes, he's averaging an absurd 42 fantasy points per game. We already discussed how Orlando has a G-League roster right now and that only makes Boucher more attractive.