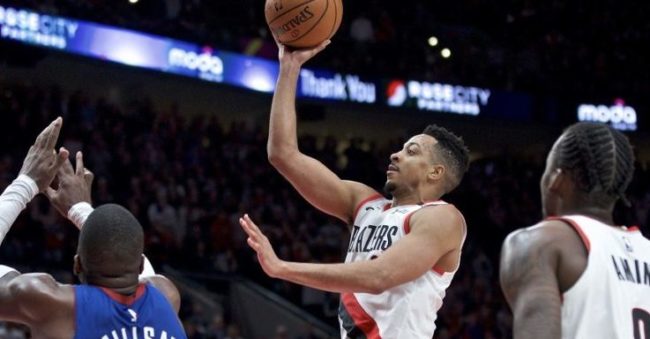 Doncic draws the best matchup you can have these days in DFS against a Sacramento Kings who rank dead last in defensive efficiency this season and play at a top-10 pace. That’s about all you can ask for when targeting fantasy plays and that’s what we get with Doncic. He’s coming off a 19 assist game against the Knicks on Friday and over the last month has averaged 27 points, eight assists, and seven rebounds. With the Mavs still pushing for the playoffs they have to keep their foot on the gas with Doncic’s minutes and he has as high a floor as anyone on this slate.

I like this play a lot more if Devonte' Graham is out again, but can roll with Rozier almost regardless. With Gordon Hayward and LaMelo Ball hurt there are a lot of minutes for him in the backcourt. Rozier has played 40 or more minutes in three of the last six games and taken 20 or more shots in the last two. This is a great matchup against a very weak Portland team on defense.

We already have word that Damian Lillard is going to miss this game on Sunday meaning we should be in line to play McCollum again in cash. The reasoning behind this is fairly straightforward and simple. With Lillard off the court, this season (and historically) McCollum is the primary beneficiary in the offense and has significant on-ball duties. For the season, CJ has a 27.5% usage rate. With Dame off the court, that number goes up to 30.5%, easily the highest on the team. The price hasn’t come up in conjunction with the new opportunity he should see on Sunday and they draw a good matchup against an injury-plagued Charlotte team.

The Rockets have already announced that John Wall is going to miss this game and that’s great news for Kevin Porter when it comes to cash games. With Wall (and Harden and Oladipo) off the court this season, Porter is the primary ball-handler and the Rockets run the offense through the second-year guard. His 27% usage rate is the highest on the team when they are playing shorthanded and his assist rate goes up as well. He also draws a good matchup against a similarly tanking Orlando team so this could be a battle of bottom-feeders. But that still leaves value and Porter is a great play here.

Much like McCollum, Powell should also see a significant uptick in both his minutes and his usage rates when it comes to Lillard being off the court. On Friday in a win over the Spurs without Dame, Powell played 38 minutes and took 17 shots on his way to 22 points, four assists, and two rebounds. You’d like to see the periphery stats take a jump as well with this kind of run, but it wasn’t totally the case on Friday. That being said, at these prices he’s a tough fade knowing the Blazers are going to be without their primary scorer.

Much like Doncic, the Mavs find themselves in such a good spot against the Kings on Sunday. The defense is bottom of the barrel and stacking Zinger and Luka should give a very high floor in cash games. Dallas has pushed Porzingis a bit more with his minutes lately running him 36 and 38 in two of the last three games. He’s averaging 23 points and 12 rebounds over his last six games and is getting up more than 18 shots per game. Porzingis is showing the ability to survive fantasy-wise even when sharing the court with Doncic which is a good thing here.

Carey got the start for the Hornets on Friday even though the other centers Zeller and Biyombo were fully healthy and we could see him in this role again on Sunday. Carey ended up playing 35 minutes in the loss to the Nets and put up 21 points and five rebounds. Some of this will depend on if PJ Washington is back in the mix and the Hornets are a bit of an injury disaster right now. We will likely have to take their lineup right up until lock to know who is playing. But Carey could be a cheap fill-in option if he’s running with the starters again.

Richaun Holmes is still out and Whiteside started the second half for the Kings at center last game. He ended up playing 24 minutes total and double-doubled with 11 points and 10 rebounds. Whiteside has big blocks upside as well if the minutes are going to be in the mid-20s or higher and he has a very solid floor at these prices on both sites. I think even if he wasn’t in the starting lineup he’d be safe enough considering the role, but I do think he gets the starting nod in this matchup.

Carter was one of the young pieces brought over Vucevic trade and they have been committed to getting him more minutes as a starter in the short term. He’s averaged more than 30 minutes a game over the last three and in that stretch is putting up 18 points and 10 rebounds in that stretch with some defensive stats thrown in as well. In the battle of two tanking teams, he won’t face much defensive resistance from the Rockets or their lack of interior size. Carter is still just a tad underpriced on both sites.