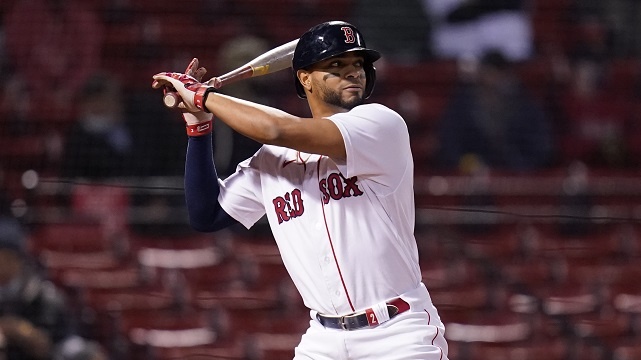 Wood and Gibson are the two most expensive pitchers on the slate today, and while both are nice bounceback stories to start the season, I'm pretty firmly in the Wood camp here. He has better peripherals (nearly 1 extra K/9, and an xFIP a whole run lower), he's cheaper, and he arguably has the better match-up. The Rangers have the 6th highest K rate this season, and a wOBA .006 points behind the Giants. I'll grab Wood, and the savings, and feel pretty good about it.

Speaking of incredible stories to start the season, have you glanced at Tyler Mahle's line so far? He's not going deep into games, but he's averaging 12+ K/9 with a 3.53 xFIP. That's incredible production. He's also got a great match-up with the Pirates, who have managed just a .291 wOBA this season, good for 2nd worst in the Majors. I think Wood is a little safer given the longer track record, but don't be surprised to see big Mahle ownership as well.

First base is pretty thin today, and while it isn't exactly accurate to say we're reaching to play a first baseman in Coors, it feels that way to some degree. Cron has fulfilled his sleeper status this season, raking to the tune of a .999 OPS at home this year. Dinelson Lamet doesn't present a great match-up on paper, but he only threw 30 pitches last game as the Padres continue to stretch him out. There is plenty of time for Cron to pay these paltry prices, and I'm fine taking his floor on a day like today.

Why are we running a 36 year old who came up at age 31 in a match-up where he doesn't even have the platoon in his favor? Well, Gurriel isn't your average big league slugger. First of all, he's almost exactly platoon neutral for his career, so we're not going to sweat the handedness of Alex Cobb. Second of all, he is honestly getting better with age. The power we're accustomed to is still there, but he's also posting a career best 11.9% walk rate. Cobb does present an interesting match-up, as the right hander has run very badly this season with an ERA almost 2 runs worse than his xFIP. Still, he hasn't been going deep into games, and Gurriel and the Astros should be able to put in some work here.

If you have to play a catcher, consider Christian Vasquez.

We nodded to this in Cron's write-up, but getting McMahon for 1 plate appearance against Lamet and 3-4 against the Padres bullpen seems like a perfectly reasonable deal to me. The left handed McMahon has an OPS north of .800 this season, and he's been more than .200 OPS points better against right handed pitching. If he's batting toward the middle of the lineup he's an easy play in any format.

We've written Fletcher up in similar spots in the past with almost the exact same writeup. No, he's not usually a great big tournament candidate. But what he does bring to the table is batting leadoff against a pitcher in Luis Garcia who has proven nothing at the Major League level. If you're considering Fletcher's floor, know this: in the first six weeks of the season, he has scored fantasy points in every single game where he's had more than 2 plate appearances. If he's in the leadoff spot again, he makes for a great way to grab some savings to pay up elsewhere.

Bogaerts is towering over the competition for best shortstop in the Majors this season, with an OPS over 1.000 and a WAR .4 ahead of the second place Trea Turner. Jorge Lopez just makes things all the sweeter. With a 6.5 ERA over 60+ innings in the last two years, it's basically a question of how long he actually gets to keep wearing a Major League uniform. Bogaerts and the Sox make for a great stack today, if you can afford it.

I don't think you'll want to play Rojas over Bogaerts, but he's still a pretty tempting option today. He's likely batting atop the Marlins lineup against Luke Weaver, who hasn't been able to replicate his 2019 form. While he was a late bloomer, there is little doubt that Rojas is the guy he has appeared to be over the last couple seasons - a guy with a great approach who is probably a true talent .380 OBP guy. He has a great floor on basically any night where he's not up against an elite pitcher.

Devers has regained his 2019 form with a bang, and when he's raking like this, he has to be in play against bad right handers like Lopez. Devers is an astounding .137 OPS points better against northpaws for his career, a .912 OPS against them this season, and has actually run badly with a .291 BABIP. His price has been climbing, but honestly it seems like there is room to grow.

In the interest of full disclosure, I'm going to do everything I can to run Devers in cash today. If I can't, though, there are a few other options to consider.

Maikel Franco, Eugenio Suarez, and Isiah Kiner-Filefa all represent ways to just go cheap at the position in a plus match-up. Our system also likes Alex Bregman if you can afford them. Not a single one of those guys represents the same floor and upside as Devers at their current prices.

We've already given you Sox aplenty and would be remiss to not point to Verdugo and Martinez as possible options today as well. You're likely familiar with Martinez's resume, but the case for Verdugo might require some unpacking. Best known for being the key piece in the much mocked Mookie Betts trade, Alex Verdugo is actually pretty darned good! He's got the ninth-lowest K rate in the Majors this season, and a better SLG than anyone above him. As you can imagine, the left-handed Verdugo is even better against right-handed pitching, posting a career .826 OPS against righties. I love both of these guys in any format.

Yastrzemski is off the DL, and looks ready to rake. While the triple-slash line isn't as sexy as it was last season, a lot of that can be explained away by Yas' unlucky .265 BABIP. The Giants' outfielder is still making lots of hard contact, and is still batting toward the top of the Giants' rather potent lineup. As for Gibson, I'm not overly concerned. The ERA is great this year, but he's skating by on a sub-8 K/9 and a ridiculously lucky 5.6% HR/FB rate. I'm looking for the Giants to turn out a few runs here.

Brantley just continues to do the same damned thing he's done for years: churning out a .360+ wOBA in the middle of a great lineup. Brantley's walk rate is down a bit this year, but he's making up for it with a career-best .191 ISO. He should be a great option with the platoon in his favor against the floundering Alex Cobb here.