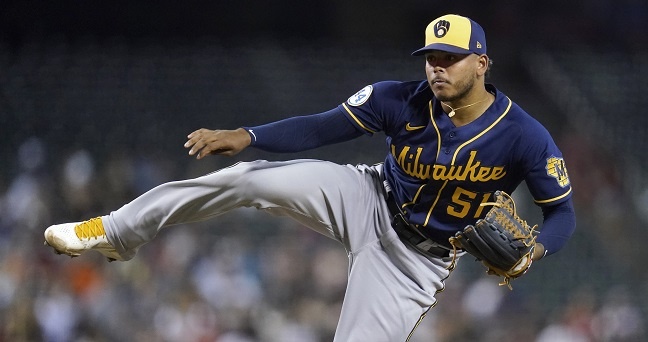 Of the ace-level pitchers going today, Peralta has by far the most appealing match-up. The Cubs are basically a league-average team in terms of wOBA, but with the 4th highest K rate in the Majors they represent a lot of DFS upside for a starting pitcher. Peralta, meanwhile, has been outrageously good this season, with his electric stuff seamlessly translating from the bullpen to the starting rotation. With a 12.67 K/9, the sky is the limit for him here.

If you want a steady option with nearly guaranteed win upside, consider Zack Greinke. The Ks are down this season, but Greinke is a -286 favorite against the Orioles, who are just .010 wOBA points away from dead last in the Majors. Greinke doesn't have huge upside, but you're picking him for his floor here.

If you can afford to pay up for two pitchers, I strongly prefer Trevor Bauer over Lucas Giolito today.

It's been a rather slow start to the season for Abreu, but the peripherals seem to support him heading back on track soon. He's running .043 BABIP points below his career levels in spite of no discernable change in his hard-hit percentage, and our model believes that should correct by the end of the season. As for Maeda, it looks for all the world like last season was an aberration, as he's drifted back into being a league-average pitcher with a proclivity to give up the long ball. I like Abreu a lot on a day where first base is shallower than usual.

Voit has been seeing more reps in the deadly Yankees lineup, but the price has yet to catch up. Voit hasn't been able to produce at the stratospheric levels we've seen in the past, but this is still plenty of bat if he's batting sixth or better against Dylan Bundy today. Vegas loves the Yankees thanks to Bundy's inability to stop the home run, with Bundy yielding almost two homers per nine innings this season. Voit is a cheap cog in a great Yankees stack today.

McNeil is a fascinating play right now, as his dirt-cheap prices are almost solely thanks to some bad luck over a limited sample this season. The 29-year-old is sporting a BABIP that's more than .080 points below his career levels, and if he were experiencing even average luck he'd be the same on-base machine we've seen in the past. He's been batting lead off for the Mets, so the opportunity is there as well. The Mets were slated to face Eric Fedde, who just hit the IL. Chances are good that whoever they will swap in for him will be even worse, so there's a nice Mets stack brewing here.

Chris Taylor is just flat-out awesome. He maintains a BABIP in the .340s for his career thanks to his Pedroia-esque laser-show approach to the plate, where a huge percentage of his plate appearances turn into either walks or line drives. He bats in the middle of this fantastic Dodgers lineup, giving him additional DFS appeal. Today he'll go up against Anthony DeSclafani, a fine pitcher whose ERA is more than a run below his xFIP. I love Taylor here at this price point.

Tim Anderson FD 3500 DK 5200
Opponent - MIN (Kenta Maeda) Park - MIN
FD - 10.83 DK - 8.42
With an expected run total that rivals the Rockies in a Coors game today, our system is all about running out as many White Sox as you can. So why not consider Tim Anderson? The White Sox's speedster is leading off against pitchers of both handednesses these days, and still packs his 20/20 DFS profile as well as ever. Like Taylor, he brings incredible safety thanks to his sustainably high BABIP, and he's a great option in any format as a result.

Another cheap value guy, Rosario is showing flashes of what made him one of the best prospects in baseball not too long ago. The Indians have him batting second these days, and a 15/20 profile is fantastic for a shortstop at this price range. Matt Manning was a highly regarded prospect coming into the season, but the 10 innings we've seen so far lead us to believe he simply isn't ready yet. Rosario, and the Indians in general, look to be in a great spot today.

Another key part of the White Sox stack, Moncada has transformed into an on-base machine, posting career highs in BB% (15.9) and OBP (.402) to start the season. He seems to have traded some power for the ability to get on base, and while we'd like more pop for DFS purposes, this tradeoff has left him very affordable. It's safe to say that this is his power floor at this point, and anything from here looks like pure upside.

It took longer than I expected it would to write up an Astro, but you should know that essentially every Astro is in play today. The main reason for that is Thomas Eshelman. The young Orioles right-hander is a never-has-been who has posted a K rate below 5 per 9 in the 60+ innings he's thrown across AAA and the Majors in the last two years. Toro is nothing special, but he's walking as often as he's striking out this season, and is batting as a part of a pretty special lineup.

You could do a heck of a lot worse than grabbing these two mashing lefties against Thomas Eshelman. We've already gone over Eshelman's resume, so we won't belabor the point, but this is not a Major League pitcher, and you should stack against him as such. Both of these guys are hot, too, with Brantley churning out 2+ hits in six of his last 7 games, and Alvarez homering in 4 of his last 5.

Do I need to twist your arm to play Betts today? With the incredible amount of value to be had by taking cheap and good hitters against bad pitchers, you're going to wind up with money left over to sock away somewhere. On DK you might want to go double-expensive at pitcher, but on FanDuel you're going to need bats. Enter Betts. It's same MVP profile we're used to out of the leadoff spot against an average pitcher. Don't overthink this.

Okay, just a little more value before we get going. Carlson was considered by FanGraphs to be the 15th best prospect in baseball coming into the season, and while he hasn't been tearing the cover off the ball, he's been more than serviceable (especially considering his double-digit walk rate). He bat lead off on Sunday, and could move to the two-hole against Faria today, but we're not worried at all. Faria had a 5.33 xFIP in AAA before being called up this year, and our model is projecting him for a rocky start here.