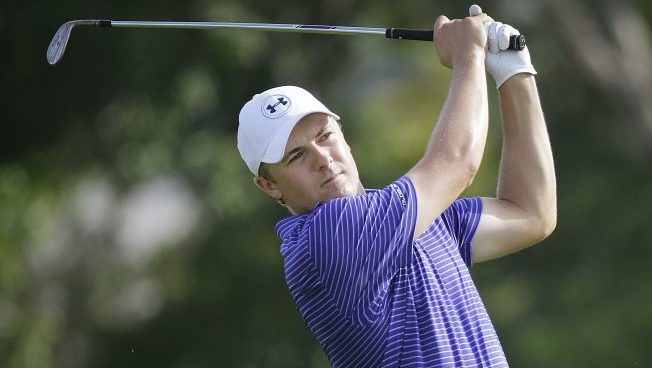 Major season will come to an end after this week as the best players in the world head to Royal St. George's Golf Club in Sandwich, England for the 149th OPEN Championship. With the event being canceled in 2020, it feels like ages since Shane Lowry hoisted the Claret Jug at Royal Portrush and I am pretty sure he has taken advantage of the extra year as defending champion.

The OPEN Championship returns to Royal St. Georges Golf Club this week for the first time since 2011 when Darren Clarke beat Phil Michelson and Dustin Johnson by three strokes to hoist the hardware. It is a classic Links venue that will be heavily impacted by the wind which is clear when looking at the weekly forecast. On top of the weather, the course can also play very unpredictable due to the undulation throughout.

Off the tee, golfers will see slightly wider fairways than in 2011 but won't provide much comfort as the rough/fescue is very tall and challenging and will force plenty of players to simply chip out and try and save par or even bogey. It doesn't get any easier on approach as the greens are undulated and protected by deep and very challenging bunkering that saw just a 34% save rate back in 2011.

In my stats model, I am centering everything around Strokes Gained: Tee to Green, both long-term and short-term. Off the tee, I am focusing on Fairways Gained(via FNGC) as the course is not long and missing fairways will most definitely eliminate birdie and even put par in question. On approach, I am looking at from a broad perspective with overall Strokes Gained: Approach and also look at some Fairway Proximity to combine with those who are hitting lots of fairways. Next up, I am predicting around a 55-60% GIR field average at best and that automatically puts a ton of importance on Strokes Gained: Around the Green/Scrambling. Finally, with a Par 70 and just two Par 5's, I have Par 4 Scoring very high in my model, as well.

With all that info, let's take a look at the scorecard and then get into the picks! 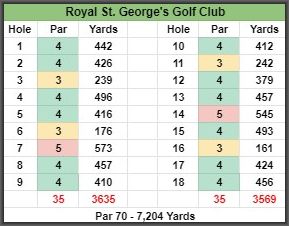 After much deliberation over the past couple of days, I have decided to go with Spieth as my top overall DFS play this week. It comes down to him checking almost every box and its starts with the form which hasn't just been a few weeks of good play. Since his last missed cut(Farmers), back in late January, Spieth has made 12 straight including a win at the Valero Texas Open and seven Top 10 finishes, six of which also happened to be Top 5's. In that time, he ranks 5th in SG: Tee to Green, 7th in SG: Around the Green, 1st in Par 4 Scoring, and 10th in Opportunities Gained. He won the 2017 OPEN at Royal Birkdale and has finished T9 and T20 in the two OPENS since that win. He is #1 in my model and I will be heavy in DFS and will also be betting him outright.

While Spieth is my favorite overall play due to the sub $10K price on DraftKings, Jon Rahm tops our systems projections on both sites, and for good reason. He is coming off a T7 at Scottish Open last week in preparation for this event and is also coming off a huge win at the U.S. Open in June. In terms of performance in the majors, Rahm has also been arguably the most consistent. Check out his finishes since the start of 2019:

He has made nine of 10 cuts with a win and six Top 10's in his last 10 majors. With that datam he naturally ranks Top 3 in this field in SG: Tee to Green in difficult scoring conditions and also ranks Top 20 in SG: Tee to Green in Windy AF conditions(both pulled from FNGC). He is going to be chalky this week with the softer pricing but I will find other ways to differentiate my lineups as I won't be fading Rahm.

I absolutely love Louis Oosthuizen this week and any major, for that matter, but I will be pivoting some of that exposure to Morikawa who is likely to be half the ownership. This will be his first OPEN Championship so he completely goes against the narratives of experience and age in this major but literally everything else stands out. It starts with form as he has not missed a cut since October 2020(14 straight) and in that time has a win(WGC Mexico) and seven Top 10's including a T4 at the U.S. Open and T2 at the Memorial in his last two events. He is arguably the best iron player in the world and has proven it lately gaining 7+ strokes on approach in five straight and eight of his last nine events with shot tracker(excludes the Masters). I will double-check the ownership projections on multiple outlets come Wednesday night and if nothing changes, I will likely be overweight on Morikawa this week and love the 35/1 outright number, as well.

No golfer stands out more in terms of PTS/$ value this week than Daniel Berger on DraftKings. He comes in ranked(in this field) 17th in SG: Tee to Green over the last 24 rounds led my his irons as he ranks 4th in SG: Approach in that time. he has also been one of the more consistent golfers on Tour this season making 15 of 17 cuts with a win(Pebble Beach), five Top 10's, and 10 Top 25 finishes. He comes with a low ball flight which is an advantage in the wind and it shows as he ranks Top 10 in SG: Tee to Green in Windy AF conditions(via FNGC). All things considered, I will be overweight on the field this week and throwing an outright on him, as well.

We can't talk links golf without mentioning the defending champion. He showed what he can do in the wind in 2019 en route to a six-stroke win at Royal Portrush where he gained an amazing 19.7 strokes tee to green. He couldn't quite keep up with the bombers at the U.S. Open(T65) but finished T6 at the Memorial and T4 at the PGA Championship before that so he is coming in with great form, as well.

Poulter has missed the cut at his last two OPEN Championships but comes with much better form this time around. He has been consistent on the PGA Tour this season making 13 of his last 16 cuts and while the Top 25's or better are few and far between, we don't necessarily need that at his current price. He is somewhat all over the place in the stats model but stands out in four big areas over the last 24 rounds(via FNGC):

All things considered, Poulter is one of my favorite value plays in all formats and would be worth shopping around for a good Top 20 price in the betting market.

We had been talking about Keegan's consistency for a long stretch through spring and after missing two cuts in June(Memorial, Travelers), he rebounded with a T14 at the Rocket Mortgage. As we all know by now, it can be a wild ride backing Keegan and his inconsistent putter(putting it nicely) but it's hard to ignore one of the best ball strikers and wind players on Tour. While he has had inconsistent finishes in this major, he has finished Top 20 in three times in his last six OPEN's. At these prices, I am on board in all formats.