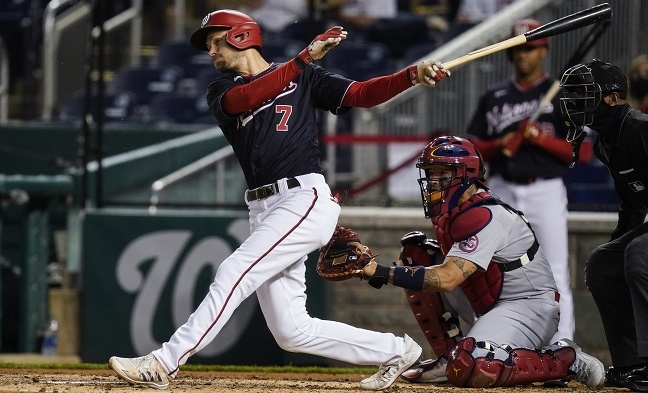 While we do get some ace pitchers tonight, the decision is tough as all of them have average-at-best matchups. At the time of writing of this, the system prefers Wheeler and I have to agree although it is splitting hairs. He is slightly cheaper than Cole on both sites and has a better ERA(2.44) and xFIP(2.73) while giving up fewer flyballs and hard contact. To split hairs even further he gets the better matchup against a Braves team who is without their star in Ronald Acuna. All things considered, Wheeler is my top pitcher if paying up tonight.

From a PTS/$ perspective, I absolutely love Frankie Montas in that mid $8K on both sites tonight. The game is pretty much a pick-em against Seattle but the starting pitchers are trending in opposite directions with Montas leading the way. He has held opponents to two or fewer earned runs in four straight starts while averaging 18.8 DK/34.5 Fd points per game.  He now faces a Mariners offense that has been league average over the last few weeks and 10% below league average(wRC+) against right-handed pitching while striking out 26% of the time. I will have plenty of exposure to Montas in all formats on both sites tonight.

Like clockwork, I am back on Yuli Gurriel as the sites are just making this way too easy as the Astros are #1 in implied runs yet come in underpriced in all the same areas once again. Tonight they go up against Kolby Allard who is in a bit of a slump at the moment posting a 5.65 ERA/4.97 xFIp over his last five starts while also giving up seven long balls. Gurriel has been good in both splits but better against lefties with a .386 wOBA and 151 wRC+. Fire him up in all formats.

Some say the Home RunDerby can wreck your swing sending you into a slump in the second half. The Polar Bear crushes that narrative as he just recently won his 2nd straight Home Run Derby and has started the 2nd half with a six-game hit streak including a double and two home runs. He now faces ex-teammate Steven Matz who has had a good, not great season and does have some issues with the long ball. Bad news for him is that Alonso crushes lefties with a .378 wOBA and monster .313 ISO. I won't be going here in cash games but love the upside and possible low ownership for GPP formats.

The plan is to spend about $18-$19K on pitching on DraftKings which leads right into a fairly balanced approach for bats. Second base provides some excellent mid-tier value and it starts with David Fletcher who has been one of the best hitters in baseball since taking over the leadoff role again in late June. In that time, he has hit .398 with a .425 wOBA and 174 wRC+, and to top it off, he has crushed lefties to the tune of a .404 wOBA and 147 wRC+ on the season. He is my favorite play at second in all formats.

Speaking of mid-tier values who hit leadoff, Jonathan India has also thrived since taking over the role hitting .292 with a .397 wOBA and 147 wRC+ dating back to June 4. The success starts with his patience at the plate as he has walked an elite 17% of the time during that stretch and then combine the plus matchup and that gives him a very high PTS/$ floor. I will have exposure in all formats.

The Nats are one of the many teams in a great spot tonight and give us multiple options at the shortstop position. Let's start with the payup in Trea Turner who provides fantasy value in every area starting with consistency as he is hitting .320 on the season and has come out of the ASB with hits in six straight. Next, he having a career year in terms of power upside with 18 home runs already and combines that with elite speed and 21 stolen bases. If you have the salary, Turner is a top overall play in all formats.

For value, we can't ignore Alcides Escobar who has been terrific since being traded to the Nats in July. He comes into tonight with hits in 11 of 15 games good for a .297 average and quickly made his way to the top of the lineup hitting ahead of Turner. At these prices, he is a top PTS/$ play in the system and one of my top values on the slate in all formats.

Also Consider: Jose Iglesias(LAA) as a value play who also gets a plus matchup and has hit lefties well this season(.344 wOBA, 120 wRC+)

Third base is a tough position with most of the top guys in tough matchups so I will head down and start in the mid-tier with Josh Donaldson who tops our projections at the position. It has been a very up and down season for Donaldson who has already had to deal with some injuries but gives us a nice floor with his patience at the plate combined with some big-time power upside. He is in play in all formats.

With my early gameplan of paying $18K-$19K for pitching on DraftKings, I will be looking for value anywhere I can get it. I mentioned the Nats being in a great spot tonight vs. Jorge Lopez and also mentioned Alcides Escobar as a top value. Joining him on my value list tonight is teammate Josh Harrison provided he is back in the five-hole where he has thrived since the ASB with hits in all six games with five doubles. At $3K on FanDuel, he is probably an addition to my Nats stack sin GPP but on DraftKings, at his price, he is a core play for me to help us get top pitching and a couple of top bats.

All the talk during the Home Run Derby this year was whether it would help Juan Soto find his power stroke. Well, I think we have our answer as he has come out of the break with not only hits in five of six games but three times has recorded three or more hits and has also hit five home runs in that stretch. With that form and the Nats elite matchup, I am shocked Soto isn't on of the players in the $6K range no DraftKings. There is more than enough value on this slate, especially on Soto's own team, to easily fit him as a top outfielder in all formats.

FanDuel seems to have their sh*& together and have Brantley priced correctly but a mid $3K price tag on DraftKings for the MLB leader in average is just insane. He has been incredibly consistent from the two-hole and although he is slightly below average vs. lefties(94 wrRC+), I don't expect more than two at-bats vs. Allard before facing the Rangers bullpen which has been terrible(6.06 ERA) since the ASB. Don't overthink it. Brantley is massively underpriced and a core play in all formats on DraftKings.