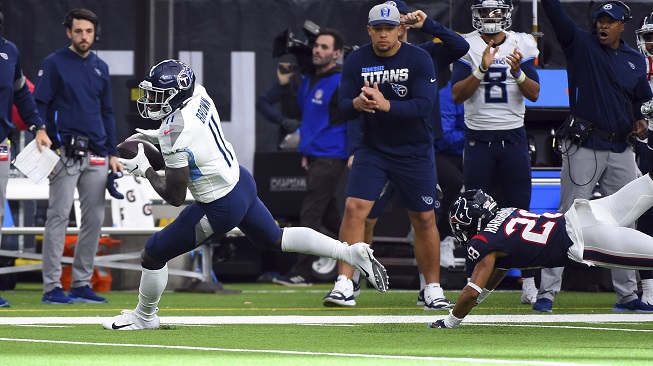 First of all, this game has the 2nd highest total on the slate featuring two teams who run a Top 10 pace. Let's start with the Titans who feature several players who may not be Top 5 highest owned at their positions.

It starts with at QB with Ryan Tannehill who comes in the same price range as the projected highest owned QB on the slate, Jalen Hurts. This gives us leverage over the field and it's not like we are losing a ton of upside as the Cards ranked mid-pack against the pass last year and look to be in decline coming into 2021. He also gets even more weapons in 2021 as the team added Julio Jones in the offseason to play opposite of A.J. Brown. That is a lethal combo especially with the attention defense's have to pay to Derrick Henry who can easily blow up a game at any point.

Most of my TEN stacks will have Tannehill and just ONE of the two wideouts but I will mix in some double-wideout lineups to maximize my upside should they both go off!

The Cardinals are a slight road underdog(+3) here and projected to be the highest owned side of this potential high-paced, shootout. It makes sense as they face a Titans defense that ranked 29th in passing yards per game allowed and 28th in fantasy points per game to wideouts. While Kyler was ranked a little lower in terms of passing attempts per game(34.9) he ended up tied for the league lead with 14 big plays(completions over 40 yards). On top of that, he trailed only Lamar Jackson and Cam Newton in rushing attempts per game(8.3) which helps his floor and adds to his upside.

Murray is also gifted one of the best wideouts in the game in DeAndre Hopkins who is my top overall play at the position this week via my rankings on my cheatsheet. He was 2nd among all wideouts in 2020 in target share and only .3% behind Davante Adams. The Cards also added to their WR stable big-time in 2021 adding veteran A.J. Green but then also drafted explosive and dynamic wideout Rondal Moore. It sounds like he has already impressed the coaches and has worked his way up the depth chart. How far remains to be seen but there is upside of him being the #2 target in this game and his price starts out very low. If he does anything remotely productive this week, he likely see a huge price increase so I will be loading up in week 1.

Now we pivot to the highest total(54.5) on the slate. I will have exposure to the Chiefs elite offense and it is much easier to stack in week one with all the values to kick off the season, I love the other side of the game for leverage. The Browns are only six-point underdogs in this one putting them around three total touchdowns and the fact they are likely trailing has me not playing Chubb and keying in on the pass game. The Chiefs are also coming off a season where they ranked 21st in fantasy points per game against quarterbacks.

We will have to wait until the gameday inactive report comes out to see if OBJ is playing but it sounds like he will be on the field and would be my top option on DraftKings coming $600 cheaper than Landry. If OBJ happened to be out, I would most definitely have a lot of exposure to Higgins in my stacks and overall on the slate. An option not pictured above but fits the "pass-heavy, come-from-behind" game script is Kareem Hunt who is the top pass-catching running back.

No matter which way you construct your Browns stacks this week, they should be low-owned with lots of PTS/$ upside at their current pricing.