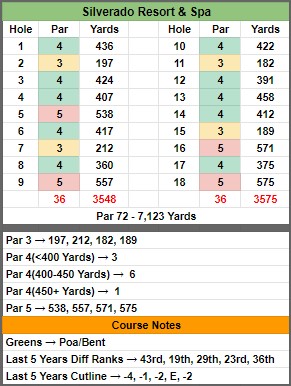 If you happened to blink recently you like missed the PGA Tour offseason. That right, after a long one-week break we are back kicking off the 2021-22 season a trip to Napa, California for the Fortinet Championship. You may recognize the event more by its former name, the Safeway Open, but the course is the same and has hosted the event since the 2014-15 season.

While we have a fairly weak field overall, it is headlined by world #1 Jon Rahm who is also joined by Hideki Matsuyama(#17), Webb Simpson(#22), and Kevin Na(#25), all of whom rank Top 25 in the world golf rankings. Also in the field this week is Will Zalatoris who finished his Korn Ferry Tour career ranked #119th in the world and worked his way all the way inside the Top 30 by the end of the season.

Those players will take on the North course at Silverado Resort & Spa which is a Par 72 setup that is listed at 7,123 yards on the scorecard. It is a tree-lined course and while it is one of the shortest on Tour, it has its challenges off the tee with the trees, doglegs, bunkering, and forces positioning much more than distance. I say positioning and not accuracy as we have seen one of the lowest fairway accuracy averages on Tour yet we see one of the highest rates in terms of greens in regulation. This is because the rough is not very penal meaning hitting the fairway isn't crucial(obviously an advantage) but if missing you better be missing in the right spots if you want a chance at birdie.

Statistically, I am looking at a combination of overall Strokes Gained: Off the Tee but when breaking down ball Striking, will be leaning much more on Strokes Gained: Approach in my model. With the GIR rate higher than the average event with slightly larger than average greens, I will be also keying in on Proximity stats and for those, it depends on the player as the approach ranges are fairly spread out. I am pretty split on Par 4 and 5 scoring but will say, I am looking closely at Par 4 scoring from 400-450 yards on Fantasy National as six of the 10 fall in that range. Finally, with a winning scoring likely in the mid-teens to -20 I am heavy on birdie or better % and opportunities gained(FNGC).

The #1 player in the world gets a tier of his own this week and it's easy to see why. He wasn't as active as some players but finished with Top 10 finishes in six straight and 13 of his last 17 events and leads this field in SG: Tee to green in almost every filtered time frame. He has only played he once(T15 in 0217) but he is an elite player and I also love the value range this week making lineup construction a lot easier with Rahm's price tag.

In the lineups I won't have Rahm in, I will be stacking a couple of these guys in that next tier down. It was is very close between them but I lean HV3 slightly as he returns to Silverado with some very consistent course history Finishing Top 30 in four of his last five trips with three Top 20 finishes. He also enters with some terrific form having finished last season with a T12 and T11 at the BMW Championship and Northern Trust. The success comes from a red-hot iron game as he gained a combined 8.6 strokes in those events and has gained 2+ strokes in five of his last six events. I will have exposure in all formats.

Another player that is Top 10 in my course history model is Chez Reavie. He finished with a career-high T3 here last year and has finished T33 or better with four Top 25's in six straight trips to Silverado. After a rough start to summer, he finished off the season in pretty good form, as well, making the cut in seven of his last nine events with four Top 25's. He is accurate and one of the best ball strikers in the field and if he can put together another strong putting round here, he should easily return value once again.

Some say you don't have course history somewhere until you do and I kind of see it with Perez. He had missed the cut here and by a wide margin in three trips from 2015 to 2019 then showed up last year and rode a red-hot putter to a Top 10 finish. Like Reavie, he also finished out the season with some excellent form with four finishes of T16 or better in his last six events. This course plays into his strengths as he is not long off the tee but finds a ton of fairways and greens and is an elite putter overall and on poa. I will have exposure in all formats.

I mentioned loving the value range this week being the reason I am on Rahm as my top golfer and that value starts with Cameron Percy. While he is a below-average putter, he comes into this event ranked 7th in the field in SG: Tee to Green thanks to some elite iron play as he has gained strokes on approach in nine straight events including gaining 4+ in four of his last six. To top it off, he also has course history finished T23 and T7 in the last two seasons.