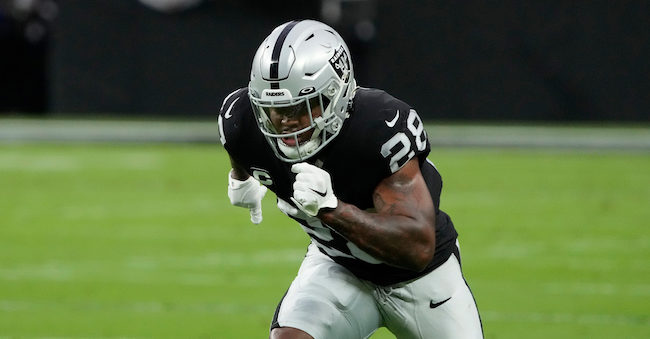 There isn’t much in the way of injury news on the quarterback front. Marcus Mariota is out for the Raiders which is only notable because he came in an played a RPO package in the first game. But that was one snap he was injured. Otherwise, the situations across the league remain relatively similar.

Friday will determine a lot about Jacobs’ availability for Sunday. He hasn’t practiced all week after being questionable leading into last Monday’s game. That was for an illness and this is for a myriad of other injuries so we will have to see. He and Kenyan Drake basically split snaps in Week 1 (Jacobs - 45, Drake - 41) and would do so again if both were active. But if Jacobs sat we would have to give Drake a significant boost. With Jalen Richard on IR it would be Peyton Barber likely spelling Drake in this scenario. This is a situation we will have to monitor. Update: Jacobs has been ruled out. Drake could see a lot of the workload here.

Elijah Mitchell isn’t injured, but Raheem Mostert is with the latter having been lost for the season. The latter made it all of two carries before leaving the Week 1 game and then having season-ending knee surgery this week. What a blow. Mitchell picked up 19 carries and 69% of the offensive snaps with Mostert out though remember that Trey Sermon has been inactive going into the game. The 49ers have shown a willingness to RBBC this bad boy so I am only lukewarm on Mitchell going into this game. The 49ers also picked up Trenton Cannon during the week.

Zack Moss was a surprise inactive for Week 1, leaving the backfield duties to Devin Singletary and Matt Breida. Singletary took 75% of the team’s offensive snaps with a 19% usage rate (carries + targets). He should be in line for something similar with Moss looking likely to sit this one again. Miami isn’t a great matchup because of the pace, but the Bills still have a higher implied total on the week.

After sitting out Week 1, Beckham has already been ruled out of Week 2 against the Texans. It’s a shame seeing as how he’s struggling to get healthy and this would have been a solid matchup against Houston. The Browns didn’t throw all that much in Week 1 against the Chiefs, leaning on the ground game, but when they did Baker Mayfield really spread the ball around. No pass-catcher had higher than an 18% target share on his 28 attempts. Jarvis Landry, David Njoku, and Anthony Schwartz each tied for five targets. With the Browns sitting as -12.5 favorites, they could end up running the ball a ton in this one as well.

Crowder sat out Week 1 on the Covid-19 reserve list, but was cleared to play in Week 2. No sooner did that happen than he was limited in practice because of a groin injury. Meanwhile, Keelan Cole could also be set to make his season debut this week. The Jets pass-catching crew is tough to trust in any scenario here with a rookie quarterback, bad offensive line, and just crappy offense in general. In Week 1, the highest target share at 19% was Braxton Berrios and Corey Davis, though the latter went for 97 yards and two touchdowns. <stro

While not technically injured, Will Fuller will make his season and Dolphins’ debut in Week 2 after sitting out a suspension the first game of the season. It will be interesting to see how the big WR acquisition for Miami holds up fantasy-wise in this new offense. Going from Deshaun Watson to Tua Tagovailoa is for sure a downgrade and the offense isn’t nearly as pass-happy either. The Dolphins only threw 27 times in Week 1 against the Patriots and DeVante Parker had seven looks for a 26% target share. Fuller likely cuts into that a bit though Miami could end up throwing more here in what should be a higher-scoring game. Update: Fuller has been ruled out.

We mentioned this in our Week 2 cash game article that Gallup would be sitting out the next three games on injured reserve. Dad Prescott and the Cowboys threw a whopping 58 times in Week 1 with Amari Cooper and CeeDee Lamb combining for a 53% target share (16 and 15 targets respectively). It’s tough to see those numbers increasing on either a percentage or volume level, but both are still great plays. But Cedrick Wilson played on 41% of the team’s offensive snaps and we could definitely see that number bump up. He makes for an interesting punt play.

Keep an eye on this situation. Smith is a late add to the injury report after playing in 73% of the Patriots' offensive sets in Week 1. They ran a lot of double-TE looks with Hunter Henry out there as well. If Smith were to sit I think we could see a moderate increase in target share for Henry, with Mac Jones looking at tight ends 21% of the time in Week 1.

ADD A FREE TRIAL OF OUR PROJECTION SYSTEM, AND CHECK OUT DFSR PRO!