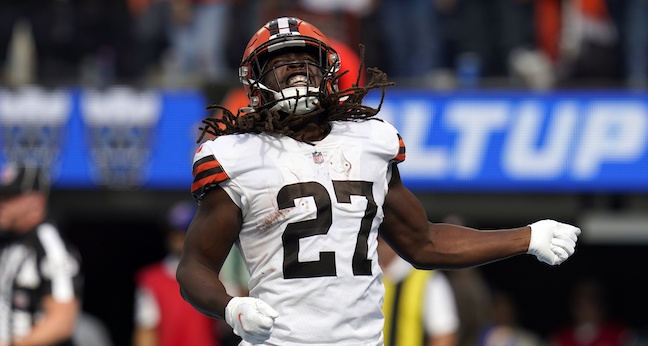 On the quarterback front, at least on the main slate, there is much news on the injury front right now. Daniel Jones took a bad hit on Sunday night against the Cowboys and had to leave the game. He ended up entering the concussion protocol but was able to clear it in time for Week 6. He will be on the field, but in a bad matchup against the Rams.

This is likely to make the biggest impact of the week at the position. Nick Chubb was ruled out for the Browns on Friday afternoon while Kareem Hunt returned to practice. That’s going to leave the latter in a smash spot on Sunday for the main slate. Hunt isn’t exactly cheap because he’s been getting work all season, but the price is still too low if he’s moving into the starting role and about to see 60%+ snap share in the offense. His receiving skills are great meaning this could be script independent and the floor is now incredibly high.

It looks like McCaffrey will sit out another week with the hamstring issue with the possibility he could return in Week 7 for the Panthers. This should leave another week for Chubba Hubbard who had a crazy workload in Week 5. Hubbard played 46 snaps, but got 24 carries and six targets in that stretch. That was good for a 65% usage rate when he was on the field, a staggering number. Now, it’s worth mentioning that he only played 65% of the total snaps, but even guidance downward on the touches would have him as a high floor play here.

This is one of the big ones leading into Week 6 and we addressed it in our Week 6 Cash Game Picks article. Williams should slot into the main RB role for the Chiefs and did handle a majority of that work when CEH went down last week. The Chiefs still like to pass of course, but Williams is coming far too cheap in a high-powered offense that will attack on the ground enough. He’s also had some down-and-close red zone touches this year already so the work should be there for him there.

The Bears are now down two running backs with David Montgomery out with a knee injury and Damien Williams landing on the Covid reserve list. That could mean we get a ton of Herbert this week. With Montgomery out last week, Herbert played 53% of the snaps and carried the ball 18 times total. He was generally effective, going for more than four yards per carry. There wasn’t any passing down work though and that is the question leading into this week. Will he operate as a three-down back or will that go to Ryan Nall? Even in a less-than-ideal matchup against the Packers, I think we can risk it on Herbert here considering the Bears loves to run the ball.

Barkley is down with a sprained ankle and will likely miss Week 6. That should leave Devontae Booker with the running back touches for the Giants, especially if they want to keep their system working in an “every-down back” style similar to what they have with their superstar. Week 5’s usage points to that with Booker playing 88% of the snaps total and touching the ball 20 times (16 carries, four targets). The problem here is the matchup against the Rams who are a good defense and strong upfront. Booker is cheap on both sites, but it’s hard to imagine him racking up a ton of yards here.

After sitting out Week 5, it looks like Dalvin Cook is set to return to action this week. He did practice, though it’s a little up in the air around what his overall snap count will be here. Alexander Mattison has been effective dos there is no reason to push Cook 100% here.

Joe Mixon was looking questionable, but now it looks like he will get a full workload for Week 6. The matchup against the Lions is a really good one considering they rank in the bottom five on defense for the season.

Tyreek Hill hadn’t practiced all week as of this writing and his availability is in doubt. This would have significant cascading effects on what happens with the Chiefs’ offense if he weren’t to play. Hill is fifth in the league in targets and second among wide receivers in DraftKings scoring. We would see a big boost for Travis Kelce obviously and then the secondary WRs like Mecole Hardman and possibly even Josh Gordon would be in play. We need to wait on Hill’s status to make a determination.

This situation is something of a mess. After a breakout game from Kadarius Toney in Week 5, it sure looked like we could go back to that well with him looking at a very high target share. But now the Giants are getting a little healthier in their WR ranks with Sterling Shepard and Darius Slayton both set to return. That is good on a team level, but bad for fantasy with it tough to give any one of these guys an outsized target share in the offense. Combine that with Daniel Jones returning out of the concussion protocol and the offense without Saquon Barkley and it is a tricky spot.

Keep an eye on what happens with Mike Williams and his status. As of this writing on Friday he hadn’t practiced all week.