The Thunder stink. That much is pretty obvious at this point already. But despite their struggles and 1-4 record, Shai Gilgeous-Alexander is playing a lot of minutes as long as the games stay relatively close. On the season, he’s taking close to 18 shots and more than seven three attempts per game. That’s in the top 25 in the league in shot attempts and when he’s dialed in he can score with the best of them. The Thunder are moderate blowout risks on Saturday against the Warriors, coming in as +12 road underdogs. But the price on Shai is just simply too low on both sites for how much they want to play him.

Murray has been awesome this season even if the Spurs haven’t been. While San Antonio is 1-4, it isn’t because of Dejounte’s play. He’s averaging just under a triple-double on the season with 17 points, nine rebounds, and nine assists per game. In fact, he ranks 12th on the season in DraftKings points per game. And yet he’s priced well under some others on the site here. The matchup against Milwaukee isn’t exactly ideal, but the Bucks are actually playing at the fastest pace in the league this season and haven’t been great on defense without Jrue Holiday and Brook Lopez.

He was a major chalk play on both sites on Friday when he drew the start for the injured Malcolm Brogdon. It didn’t exactly work out with McConnell tallying just high points, four assists, and four rebounds in his 33 minutes. I’m not concerned with it at all and will be heading right back to the well again here against Toronto. For starters, TJ ran bad from the field, shooting just 4-14. He actually tied for the third-most shots on the team which is a great sign. I don’t think the context has changed at all for him despite a poot fantasy showing against the Nets.

I like that we saw a minutes' increase for Wiggins last game, playing 37 in the overtime loss to the Grizzlies. The Warriors have been keeping it conservative with his run to start the season, but that could be changing now. His scoring is down just a bit this season, averaging 16.6 points per game. But he’s also shooting under his career numbers from behind the arc despite taking more three attempts per minute on the year. The efficiency should tick up some and I do think we are buying low on Wiggins here.

This is a matchup between the fastest and sixth-fastest teams in the league right now. There’s a reason the 224.5 over/under is easily the highest on the slate and we are going to want to jam Giannis into lineups without hesitation. His minutes have actually increased some in the last couple of games and he’s just doing what we’ve become used to, dominating every aspect of the fantasy (and real-life) game. His usage is up this season without Jrue Holiday as are the per minutes rebounds and assists. He leads all players in FanDuel and DraftKings scoring. This one is easy.

Butler’s 25 points per game to start the season would represent the best mark of his career if he were to keep it up, and there are reasons to expect that he will. He’s taking the most shots (18) of any point of his career and the Heat have him playing more minutes to start the season. Memphis ranks 27th in defensive efficiency this season and play at an above-average pace. I like stacking the Miami side of this one in cash. 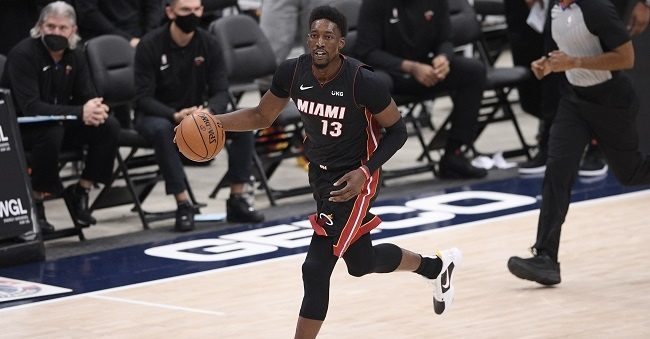 The Heat are coming on the back-to-back here which has me a little concerned about their run. And the big guys played a lot of minutes on Friday. But this is a great spot for Bam who is coming off of a stat-filling 26 points and 19 rebounds against the Hornets. He’s up to 14 rebounds per game, which is tied for third in the league. With Lowry around, the assists are way (way) down from last season, but the boards make up for it in the fantasy scoring department.

This is a little speculative and it’s worth noting that he didn’t even play the last time the Thunder faced the Warriors just two games ago. But he played 26 minutes last game against the Lakers which might be a sign of things to come. Now, LA trends way, way bigger in their lineups especially at center which could have been the reason for Favors playing more, something we want to keep in mind. But he put up 15 points in six rebounds in that game, more than enough to warrant consideration at these punt prices.

It can feel like a bit of a dice roll to see where Turner’s minutes land on a night-to-night basis. They’ve been all over the place this season with Rick Carlisle, at times, playing matchups more than anything else. But while Toronto starts on the smaller side, they do trend a little bigger on their backline with their second unit, meaning we could get more minutes from Turner here. Foul trouble cost Turner some minutes early in the season, but I think the plan is to play him about 30 per game. If that’s the case then the FanDuel price is just too low especially considering the importance of defensive stats there.