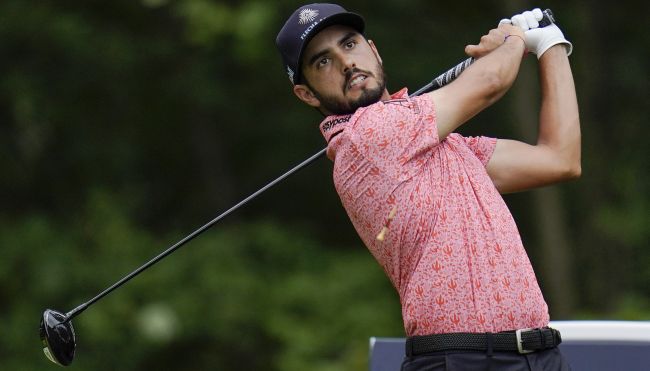 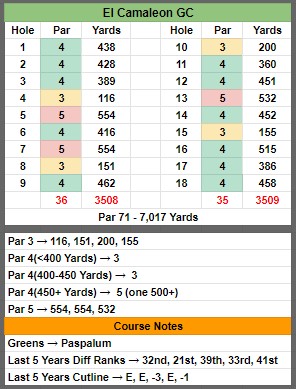 From Bermuda to Mexico, the PGA Tour holiday season continues this week with the World Wide Technology Championship at Mayakoba. While this year's field has just one player(Justin Thomas) ranked inside the Top 10 of the Official World Golf Rankings, it is a sneaky strong field with 48 of the Top 100 players.

The course is a Par 71 that is listed at 7,017 yards on the scorecard and is made up of four Par 3's, 11 Par 4's, and three Par 5's. This naturally puts emphasis on Par 4 scoring and when breaking that down further, five of those Par 4's are over 450 yards with one over 500 yards. I will also be looking at an off the tee model similar to last week which includes good drive %. Looking at past results and stats, there are plenty of players who hit between 50-60% of fairways but still hit over 70% of greens and finish near the top of the leaderboard. The biggest weight in my model goes towards approach shots and birdie or better % as the average winning score is right around -20 each year.

Let's get into the picks.

Choosing between the Top 3-4 golfers this week is splitting hairs and I will have exposure to all of them in my multi-entry builds but if you are making me choose one(and I know you are), it's Abraham Ancer. After a missed cut and T55 in his first two PGA Tour appearances here at Mayakoba, he has tallied a Top 25 in four straight with two Top 10's. Last year he was second to only Hovland in GIR and made just one bogey but ironically, as a top putter on tour, couldn't sink a birdie putt to save his life. After a missed cut to start thT14 at the CJ Cup and looked good with the irons and putter. I feel he is the safest and my choice for cash games in this top tier.

It's crazy how quickly things change as Aaron Wise was once the definition of a GPP play due to his inconsistency tee to green and especially on the green. Going back to May, he has shown tremendous consistency making 12 straight cuts(longest streak of his career) with four Top 10's including back to back at the Shriners Open and Sanderson Farms Championship. He has also seen some HUGE improvement with the flat stick gaining strokes in four of his last six events which is easily the best stretch of his career. He now returns to Mexico where he finished runner-up a year ago and also has a Top 10 back in 2019. The price is up but I will still have exposure in all formats this week along with an outright bet at 33-1.

Gooch has played here in Mexico at this event twice with underwhelming results(T41, T55) but this year could be a different story. I say that as he enters this week with some of the best form in the field with finishes of T4, T11, and T5 to kick off the fall portion of the 2021-22 season. That form has been led by some elite iron play as he has gained 13.5 strokes on approach in that time and has also been elite around/on the green(+11.1 ATG, +2.8 putting in those three events). I look for that form to carry over as Gooch is one of my top plays in my player pool this week.

In a weaker field where a ton of players saw a big price boost, I was a little shocked to see the price for HVIII. It's right in line with his price at the CJ Cup but looking back at the start of this season, he was in the 9K range on DraftKings for both the Fortinet and Sanderson Farms championship. He played very well in both those events finishing T16 and T11 and was in line for another top finish at the CJ Cup but failed miserably on the greens(-4.9 strokes putting). I personally trust the ball striking, especially the iron game and while he hasn't seen consistent success here in Mexico, he does return with two Top 10 finishes in five trips. Lock and load in all formats.

Another short course, another value-priced Russell Knox. Sign me up. He entered last week with some suspect form(to say the least) but ended up leading the field in greens in regulation which led to 19 birdies and a T12 finish. He now comes to Bermuda where he has had similar success finishing inside the Top 40 in all eight trips including three Top 10 finishes. At these prices, he is in play in all formats on both sites.